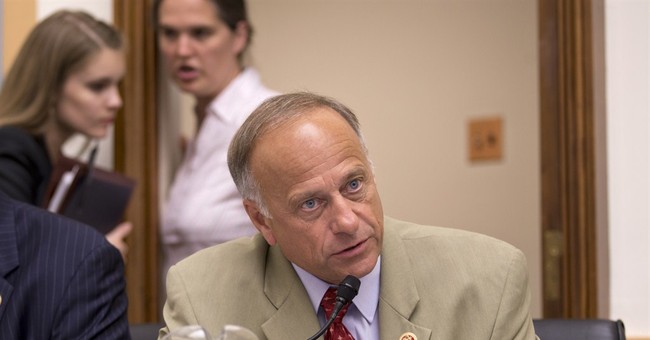 It's hard to know where to begin in responding to Rep. Steve King's, R-Iowa, recent comments on so-called "Dreamers": illegal immigrants who came to the U.S. when they were children, often brought here as babes-in-arms by their parents. King told the conservative news organization Newsmax that for every valedictorian brought into the country as a young child by his or her parents, there are another 100 out there who "weigh 130 pounds and they've got calves the size of cantaloupes because they're hauling 75 pounds of marijuana across the desert. Those people would be legalized with the same act."

In a subsequent interview, he repeated his claim: "It's not something that I'm making up," he asserted. "This is real. We have people that are mules, that are drug mules, that are hauling drugs across the border, and you can tell by their physical characteristics what they've been doing for months, going through the desert with 75 pounds of drugs on their back. And if those who advocate for the DREAM Act, if they choose to characterize this about valedictorians, I gave them a different image that we need to be thinking about because we just simply can't be passing legislation looking only at one component of what would be millions of people."

King offered no "proof" of his bizarre theory, unlike his ideological forebears in the anti-immigration movement in the early 20th century. During immigration debates a hundred years ago, Ivy League-educated "scholars" produced drawings of supposedly inferior Southern and Eastern Europeans that featured men with sloping foreheads, Neanderthal-like brows and other subhuman characteristics. Their efforts led to the passage of legislation intended to keep out Italians, Jews, Poles and others who were deemed inferior to native-stock Americans.

Maybe King will take to the floor of the House with photographs of melon-sized calves among young Mexican boys in an effort to persuade his fellow members of Congress that Dreamers are all a bunch of drug smugglers.

Farfetched? Not really. King repeatedly has warned that those who want legal status for those illegal immigrants who came here as children are opening the door not only to the innocent but to those who have been "undermining our culture and civilization." King's repeated demonization and dehumanization of illegal immigrants recalls the words of eugenicist Madison Grant, who, in his influential 1916 book "The Passing of the Great Race," decried the "mongrelization" of America by immigrants from Southern and Eastern Europe.

King hides behind the fiction that his only concern is upholding the rule of law. Funny, he doesn't seem to have the same regard for the sanctity of laws on the books when it comes to Obamacare -- nor should he. King's fellow Republicans who have sponsored their own version of the DREAM Act, which would give those who immigrated illegally as children the right to stay here as long as they have been law-abiding and stayed in school, believe in the rule of law, too. But not all laws are created equal.

Some laws deserve to be repealed or rewritten. And many of our current immigration laws fall into that category. The last major overhaul of immigration legislation occurred nearly three decades ago. The enforcement mechanism in the law has never worked -- despite repeated efforts to enhance border security and punish employers who knowingly hire illegal immigrants.

Republicans in Congress need to do more than condemn King's words. They need to get serious about passing immigration reform. Since the leadership has insisted on taking up myriad separate bills instead of considering Senate-passed comprehensive legislation, there is no better place to begin than by giving a pathway not only to legalization but also to citizenship for young people who broke our laws unwittingly.