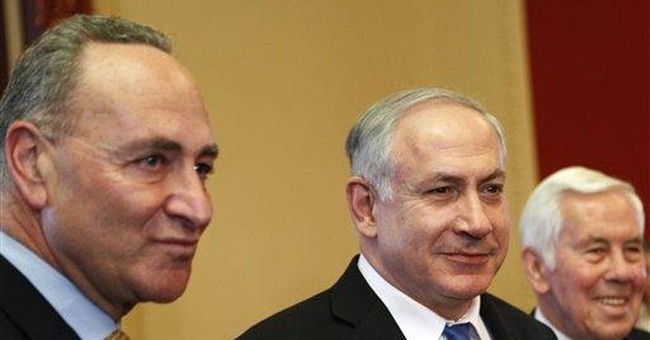 Judging by his actions to date, President Obama appears to have an almost visceral antipathy toward Israel. He's happy to bow and scrape to Saudi King Abdullah, to have photo ops with Venezuelan President Hugo Chavez, and, as he made clear during the campaign, would even open his door to Iranian President Mahmoud Ahmadinejad and Korean leader Kim Jong Il if only they would deign to sit down for a chat. But Obama gave Israeli Prime Minister Benjamin Netanyahu the bum's rush on his recent visit to Washington. No photo ops, no joint press conference, no diplomatic niceties whatsoever.

Why? Because the Israeli government had the temerity to announce plans to build housing units for its own citizens in its own capital. The White House claims that building additional units for Jews in East Jerusalem imperils the "peace process." But the so-called settlement issue is simply a convenient excuse to distance the administration from Israel. There is nothing in the United States' self-interest that would prompt this reversal of more than 60 years of U.S. pro-Israel policy, so the explanation has to be some deep-seated animus by the president.

Israel remains the only true democracy in the Middle East, one with whom we share a common set of values and history. By contrast, it is surrounded by countries ruled by autocrats or downright tyrants, many of whom are committed to wiping Israel -- and all the Jews who live there -- off the face of the earth. Were it not for the consistent support of the United States over decades, both moral and strategic, Israel's enemies might well have succeeded in doing so.

U.S. policy has for some time now been committed to the notion of a two-state solution in the Middle East, with Israel presumably gaining security from the threats to obliterate the Jewish state by negotiating away land. But even if the Israeli-Palestinian conflict were to disappear tomorrow and the two could become good neighbors overnight, there would be negligible effect on reducing the terrorist threat the United States faces from radical Islamists.

The Islamists don't just hate us because we love Israel. They hate the United States and Israel for identical reasons: because both countries love freedom, liberty, and individual rights. Even if Israel were to disappear -- as the Islamists will do all in their power to ensure -- the United States would still be the enemy, the Great Satan that they are intent on destroying. Surely President Obama understands this -- so the root of his enmity toward Israel lies elsewhere.

Some Obama critics point to his personal ties to Islam -- he is the son of a Muslim father, was raised, for a time, by a Muslim stepfather in Muslim Indonesia, and has an understanding and affinity for Muslim culture not common among many Americans. But I believe the problem is more politically than culturally driven. Obama is a man of the Left -- and the Left is now, and has been since the '60s, reflexively anti-Israel.

President Obama has precipitated a crisis with our staunchest ally in the Middle East and will do nothing to further the prospects for peace. Why should the Palestinians, whose internecine conflicts are a huge impediment to peace, make any concessions of their own when Obama is willing to decide what territory Israel must give up before the talks even begin?

The president's slap at Israel and its leader couldn't come at a worse time. Arab leaders will be meeting this weekend in Libya with promises to set aside their differences so that they can unite against Israel. Syria's Bashar al-Assad has called on his fellow Arabs to "rescue Jerusalem," a bellicose statement given Syria's attack on Israel in 1973. And the Arab League is making overtures to Iran as well, pushing for closer ties with a country that has traditionally been viewed as a threat to many of its Arab neighbors as well as Israel and the U.S.

President Obama's hostility to Israel will embolden not only Israel's enemies but our own. Thankfully, Congress remains steadfastly supportive of Israel, as do the American people. But other nations look to our president to judge U.S. sympathies -- and President Obama is sending the wrong message to friends and foes alike.