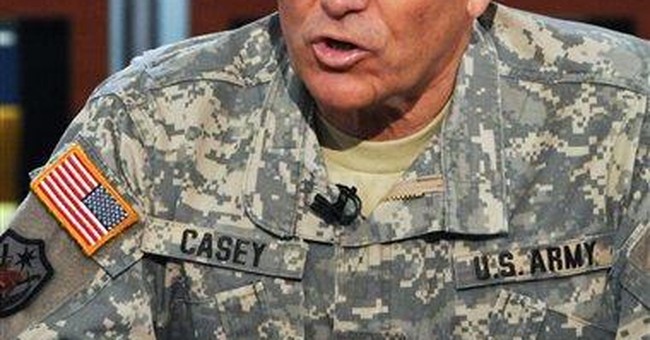 "What happened at Fort Hood was a tragedy, but I believe it would be an even greater tragedy if our diversity becomes a casualty here." Those words were spoken not by some diversity guru but by the Army Chief of Staff, Gen. George Casey, on ABC last week in the aftermath of the slaughter of 13 people at the hands of a fellow officer. Nor were they isolated comments open to misinterpretation. Casey repeated them, in virtually identical form, in interviews with NBC and CNN.

Casey's remarks should lead to his immediate firing. But, of course, that won't happen because he is merely echoing the official government line. From the moment word leaked out that the suspected shooter at Fort Hood was Army Maj. Nidal Malik Hasan, government officials began to weave their Orwellian cocoon. The commander in chief warned Americans not "to jump to conclusions," while Casey and others dismissed as "anecdotal evidence" eyewitness reports that Hasan shouted "Allahu Akbar" before pumping 100 rounds of ammunition into his fellow soldiers. The only ones that jumped to conclusions were the U.S. government; immediately after the attack, the Obama administration shot down the notion that this was an act of terrorism.

But not even the mainstream media are buying this nonsense. Journalists have tracked down Hasan's colleagues at Walter Reed Army Hospital, where Hasan served as a staff psychiatrist until he was transferred to Fort Hood prior to his intended deployment overseas. They've talked to local imams with whom he had contact, and have even found investigators willing to reveal, albeit anonymously, details of botched investigations of Hasan. And the story line emerging is increasingly clear: Hasan had become a radical Islamist who reached out to jihadists in Yemen, and perhaps elsewhere, as he prepared to launch a terrorist attack on a military installation.

Hasan initiated contact with Anwar al-Awlaki, an American-born imam now living in Yemen, who had ties to three of the 9/11 hijackers. Hasan sent 10-20 e-mails to Awlaki before the Fort Hood shooting, and Awlaki has since praised Hasan for the attack.

It also appears that Hasan wrote approvingly of suicide attacks in blog entries and that he even compared suicide bombers' actions to those of soldiers who have saved their comrades' lives by throwing themselves on live grenades. We know that many of his Walter Reed colleagues were shocked when he chose a medical seminar to warn "It's getting harder and harder for Muslims in the service to morally justify being in a military that seems constantly engaged against fellow Muslims."

The biggest question that remains is not Hasan's motivation, but the government's. Why is it that counterterrorism investigators and the Army were so eager to dismiss suspicion of Hasan when his actions clearly warranted a high-priority, full-fledged investigation? Were Hasan's colleagues discouraged from reporting his suspect activities because they feared retaliation from military brass in the name of protecting "diversity"? Surely, Casey's own words are fair warning to anyone in the military that they should tread lightly in ever questioning the activities of any Muslim in uniform.

But Casey's outrageous statements are more likely to encourage prejudice than quell it. The military must honestly and forthrightly assess the views of Muslim soldiers to determine whether they are compatible with military service. If we can't be assured that the military is doing its job to ensure that extremists do not infiltrate our armed forces, then every Muslim automatically comes under suspicion.

Like so much of the "diversity" agenda, holding individuals to a different standard of behavior based on their race, ethnicity -- and in this case, religion -- reinforces the idea that they are inherently different from everyone else. We aren't protecting such individuals; we're reinforcing the idea that we don't expect the same from them as we do others.

Some 3,500 Muslims now serve in the U.S. military. The overwhelming majority of them are loyal Americans who see no conflict between their personal religious duty and service to their country. But there can no place in our military for those persons of any faith who do.

America has now seen the horrors of what "diversity at any cost" can lead to.