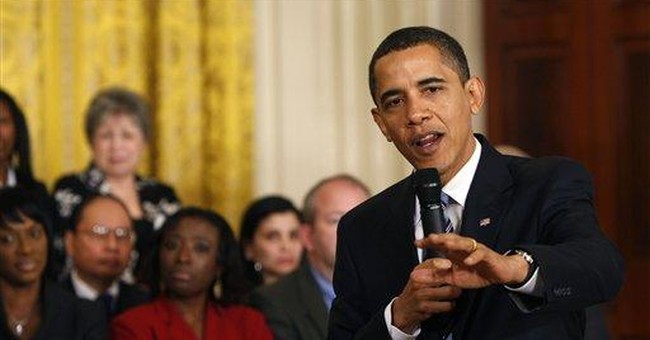 President Obama decided that the man he originally picked to head the civil rights division at the Justice Department, Thomas Saenz, was too controversial, so he's now turned to someone he hopes will have clearer sailing through the confirmation process. Earlier this month, the president nominated attorney Tom Perez as assistant attorney general for civil rights. Perez is currently the secretary of labor for Maryland and had previously worked in the civil rights division at Justice in the Clinton administration. The administration decided not to move forward with the Saenz nomination largely because of Saenz's efforts on behalf of illegal immigrants, which made him an easy target, but Perez also has some skeletons in his policy background that could prove troubling.

In 2006, Perez wrote a law review article for the University of Maryland's Journal of Health Care Law and Policy, in which he argued for explicit race-conscious admissions policies for medical school. He cited a handful of studies that purport to show that minority doctors are more likely to provide medical care to under-served poor minority populations than white physicians are. He then leapt to the conclusion that the best way to improve access to medical care for underserved populations was to insist that medical schools use race or ethnicity in choosing which students to admit.

In effect, Perez appears to be arguing for a form of medical apartheid in which minority patients should be served by minority doctors under the presumption that both groups benefit from this practice. The argument is both insulting and dangerous.

It is true that black and Hispanic doctors disproportionately serve patients on Medicare, Medicaid and other public health care programs, but it is a big leap to suggest that this practice should be encouraged or is, indeed, beneficial either to aspiring doctors or poor black and Hispanic patients. As other studies have shown, doctors who primarily treat patients enrolled in government programs are less likely than those with private insurance to have passed demanding board certification in their specialties and to have access to high-quality specialists in other fields. Under Perez's rationale, it shouldn't matter whether the doctors who serve poor people are less likely to be board-certified so long as they are black or brown.

And Perez's solution to the problem is to lower standards even further so that more under-qualified minority physicians are admitted to practice medicine. Medical schools already admit black and, to a lesser degree, Hispanic students with lower qualifications than whites or Asians. In 2001, my Center for Equal Opportunity published a study of admissions to the University of Maryland School of Medicine and found that the university admitted black students with much lower test scores and science GPAs than whites, Asians, or Hispanics.

As a result, black enrollees, on average, had much greater difficulty in medical school, maintaining only a 2.5 average in their first two years of medical school (compared with a 3.0 for Hispanics and 3.2 for whites and Asians). And they were less likely to pass medical licensing exams or to graduate than others. (CEO completed similar studies of medical school admissions at several other schools, which are available online here.)

Perez's solution would exacerbate the problem of poor health services for minority patients, not improve it. Ironically, the modern era of affirmative action was ushered in by the famous Bakke Supreme Court decision in which a more qualified white medical school applicant sued the University of California at Davis Medical School because it denied his application, choosing instead a less qualified black student, Patrick Chavis.

For years, advocates of race-based admission argued that Chavis' service to poor and minority patients showed the wisdom of the university's decision. Those arguments proved both embarrassing and tragic in the late 1990s when the California Medical Board suspended Dr. Chavis' medical license, citing "inability to perform some of the most basic duties required of a physician" after several patients died or were severely injured in his care. Clearly, not every affirmative action medical school admittee will end up like Chavis, but admitting poorly qualified medical students increases the risk of producing incompetent physicians.

Race should never be the deciding factor in deciding who gets into medical school. President Obama has done a disservice to all of us by choosing a man to lead the Justice Department's civil rights division who thinks it should.

Hawley Raises Ethics Questions Surrounding Seven Democrats
Townhall
Twitter explains why Colin Kaepernick, 'one of the greatest quarterbacks of our generation,' is trending
Twitchy
Trump Makes New Move That's the Ultimate Troll, and Liberals Are Already Melting Down
Redstate
Tulsi Gabbard on Dems' Terror Law: ‘We Don’t Have to Guess About Where This Goes or How This Ends'
PJ Media