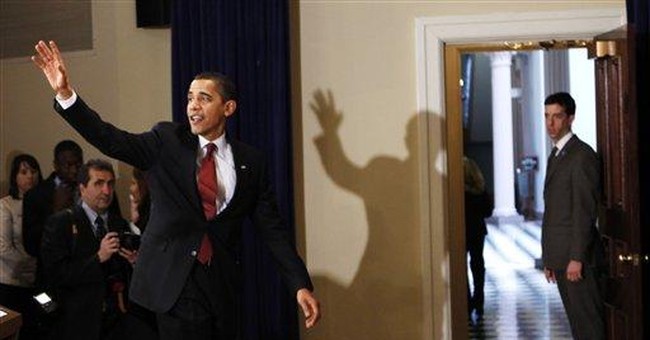 President Obama reminds me of the fellow who's off to save the world while he ignores the disaster in his own backyard. Instead of focusing on the urgent problems facing the country -- the credit crisis and the collapse of the housing market -- he's diverting scarce resources and attention to solving health care, reforming education, and stopping global climate change. Worse, his efforts to tackle these intractable issues involve fiscal policies that exacerbate the current financial crisis. He is not only driving the deficit up to unsustainable heights, his policies will amount to a huge tax on all Americans.

President Obama claims he's only going to raise taxes on the wealthiest Americans. But even if his tax-the-rich scheme didn't depress investment and slow growth -- which it will -- there are other ways government policies, in effect, tax individuals. Government also imposes tax increases indirectly on individuals through policies that encourage businesses to raise prices paid by everyone.

Most companies operate on relatively thin profit margins; the corporate average has been about 8.5 percent since 1980. Those margins stay relatively constant because capitalism works. If a company's profits get too high, a smart competitor comes in and starts a rival business that makes the same product for less, and the greedy company loses customers.

But what happens when government taxes all businesses -- or even a select group of companies? If the company's profits decline, the company might reasonably respond by laying off workers or reducing capital outlays to cut costs. That's not exactly what we'd like to see at a time of skyrocketing unemployment, declining construction, and decreasing manufacturing orders. The alternative for most businesses is simply to pass on the increased costs to the consumer.

That is exactly what will happen if President Obama's cap-and-trade policy on greenhouse emissions is enacted by Congress. The president wants to impose stricter pollution controls on carbon emissions and allow companies that can't meet those regulations to purchase the right to pollute more through a government auction, with the money flowing into the federal budget.

But how will energy companies pay for what is really a new government tax? By passing it on to their consumers, of course. And unlike other businesses, where competition can help control costs, there isn't much competition in the utilities world. Most of us have few choices when it comes to purchasing electricity or natural gas. We're pretty much captives of our geography, so we won't have a choice about choosing a more efficient, less polluting electricity company if President Obama gets his way on cap-and-trade legislation.

The Congressional Budget Office estimates that cutting carbon emissions by 15 percent would result in a huge cost to most Americans. According to CBO's analysis as reported on the Wall Street Journal editorial page March 9, the plan would cost the bottom 20 percent of households 3.3 percent of their entire after-tax incomes every year, or about $680, while those in the next three quintiles would pay between $880 and $1,500 a year in extra energy costs.

This is exactly the wrong thing to do, and the worst time to do it. The president ought to get over his messiah complex. He's not going to slow the rise of the oceans, as he promised in June when he clinched the Democratic presidential nomination. What the country needs now is not grand schemes to redistribute wealth and provide all Americans cradle-to-grave education and health care at government expense. We don't even need someone to find a way to keep all those homeowners facing foreclosure in their homes. Sadly, the housing bubble has burst and everyone is going to suffer, especially those who couldn't afford the homes they bought in the first place.

What we need now is someone who can figure out what actions the government can and should take to unfreeze credit. If President Obama fixes that, he'll be miracle worker enough.