Terror in the Skies 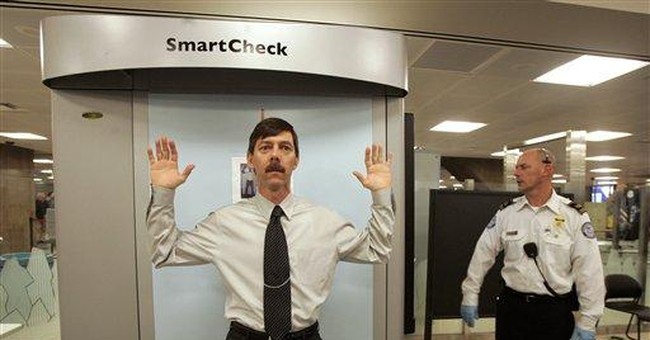 Just in time for the busiest travel week of the year, we have this news from the General Accountability Office, Congress' investigative arm: It's relatively easy to get bomb-making materials through security checkpoints and onto airplanes. A group of undercover GAO workers apparently did so recently, managing to get past baggage screeners at 19 airports, despite new rules intended to prevent precisely this kind of thing from happening. Is this just holiday hype, or are we really vulnerable to another 9/11-style plot?

According to the report, investigators found two types of devices that terrorists could use to cause an explosion in the air. One was an IED (improvised explosive device) using a liquid explosive and a low-yield detonator, which could also be used independently to explode but would cause more damage in combination with liquid explosives. The other device was a simple IID (improvised incendiary device). The materials for components to make these bombs were available at local stores and on the Internet, which also hosts myriad websites with instructions for making these and other explosive devices.

The GAO, for security reasons, did not provide detailed information on how their investigators managed to elude screeners. The government doesn't want to create a how-to manual for would-be terrorists. However, the information in the report, which was released this week, suggests our skies are far from safe. But then anyone who flies regularly could have told Congress as much.

Rules adopted in 2006 to stop travelers from bringing on board large quantities of liquids and gels are, in my own experience, inconsistently enforced. I've had lipstick and prescription eye drops confiscated in some airports when I failed to put them in the requisite quart-sized plastic bag; while at others, I've inadvertently passed security with a 16-ounce water bottle in my carry-on. In some airports, a metal rosary crucifix in my briefcase has been enough to alarm screeners, while at others, a small pocketknife and nail scissors have passed muster.

It doesn't help that screeners at many airports seem more interested in carrying on personal conversations with each other than paying close attention to their jobs. They give off the impression that they don't take what they do seriously. These are relatively low-paid, low-skilled workers, not security experts, after all, yet they are our first and last line of defense in keeping air travel safe.

And passengers are a big part of the problem. They're impatient and carry on far too much junk, including every imaginable technological device: cell phone, PDA, DVD player, MP3 player, headset, computer, digital camera and whatever else they can fit into two overstuffed bags. How can even a conscientious screener distinguish between a benign entertainment or communication gadget and one that can be used to detonate a bomb?

If we're really serious about security, we're going to have to put up with more inconvenience when we travel. Maybe there ought to be separate lines at security checkpoints for travelers who insist on bringing electronics on board, for example. We could man those lines with more skilled screeners. And of course we need better equipment that can sniff out dangerous liquids, no matter how well disguised as everyday toiletries or other innocuous materials. The GAO recommended similar measures in its report released this week.

We know the terrorists are planning future attacks on airplanes, and we have a good idea that they will improvise bombs using liquids and detonators. A plot to do just that was interrupted in Great Britain in August 2006, which led to the current restrictions on liquids and gels. We can't become complacent just because we've had no attacks in six years. Both World Trade Center plots were several years in the making.

But the bottom line is, we have to be willing to put up with inconvenience if we are to remain safe. I would hate it if I couldn't take all my gadgets on planes, but I would adjust, as would most travelers, if some devices were prohibited. Somehow we managed to fly cross-country without iPods and Bose headsets or even cell phones, PDAs and computers for many years. Surely we can learn to limit ourselves to carrying only one or two such devices on board if it meant we'd get through the lines quicker.

We can't blame the government for not keeping us safe if we're not willing to do our part as well.