Why Not Reward Excellence? 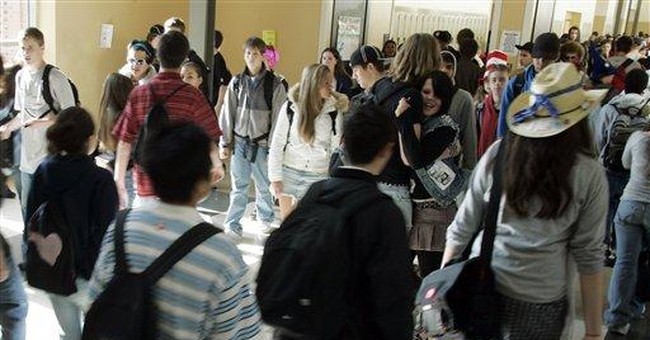 An employee who works harder than his colleagues, produces more and generally excels at his job should be paid more than one who is mediocre, or worse, a downright failure, right? Most employers reward good workers with promotions, bonuses and higher pay in order to keep them. But in the one profession you'd think that excellence should be rewarded -- namely, teaching -- it's often difficult to do so.

Teachers unions have been the main obstacle to paying teachers based on their performance, but change may be on the horizon. It's been a long time coming.

This week, New York Mayor Michael Bloomberg reached an agreement with Randi Weingarten, president of the nation's largest local teachers union, the United Federation of Teachers (UFT), which will allow the city to recognize that some teachers are worth more than others -- well, sort of.

The plan, which took months of negotiations to finalize, will provide bonuses for good performance as measured by improvement in students' test scores at the city's poorest schools. The hitch is, the money won't go directly to teachers whose students improved dramatically but to schools to be divvied up by compensation committees, which could choose to give it only to the best teachers or divide it evenly among the staff.

The idea for merit pay for teachers is an old one. President Ronald Reagan actually campaigned on the issue in his 1984 re-election bid, following the release of a dramatic report on the decline in educational performance in the U.S., "A Nation at Risk." Al Shanker, who was also the longtime president of the UFT and the American Federation of Teachers, was the first national union leader to signal a willingness to consider the idea.

In his excellent new biography -- "Tough Liberal: Albert Shanker and the Battles Over Schools, Unions, Race, and Democracy" -- Richard Kahlenberg notes that Shanker took the first steps toward union acceptance of merit pay more than two decades ago. At a union conference in 1985, Shanker told members, "Most people in this country believe hard work and better work ought to be rewarded, and opposing this makes us look like we are not interested in quality. So we ought to think about ways of handling [merit pay] while avoiding the pitfalls."

Shanker's approach was to endorse the concept of creating a new class of teachers, so-called master teachers who would receive certification from an independent board that would apply rigorous standards. As Kahlenberg points out, Shanker knew that such an idea would be resisted by his rivals at the National Education Association, so he enlisted the help of the Carnegie Forum on Education and the Economy, which created a task force on teaching and ultimately released an influential report recommending the creation of a private board to certify excellent teachers who would qualify for higher pay.

The resulting National Board for Professional Teaching Standards has certified 55,000 of the nation's 2.5 million teachers, and about one-fourth of school districts offer financial incentives to those teachers who achieve certification. And of course President Bush's "No Child Left Behind" legislation requires states to ensure that all teachers meet minimum qualification standards. However, not one state has reached the administration's goal of having 100 percent of teachers in core academic subjects meet its "highly qualified" standard, and the administration has had to back off penalizing them, opting instead to give credit toward progress in meeting the standard.

New York's plan is a first step toward rewarding excellence on a large scale. But UFT President Randi Weingarten's silly disavowal at the press conference, announcing the agreement "shuts the door on the individual merit pay plans that I abhor," suggests she's no Al Shanker.

Merit pay makes sense, most of all to the really good teachers who should be rewarded for their excellence. If top-performing schools should receive rewards, why not go the next step and reward specific individuals who show they can make a difference even if their colleagues lag behind?