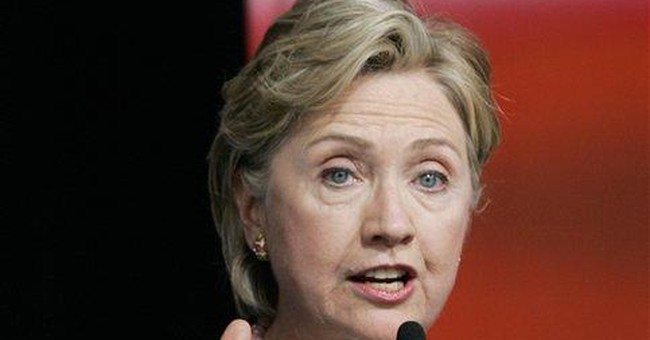 Hillary Clinton may be pulling away from the pack of Democratic contenders, but she's still playing it safe. She's quick to stake out territory that puts her in the mainstream of Democratic opinion, even if it means disavowing her own past positions -- or those of her husband.

This week, Sen. Clinton deftly danced around the trade issue during a debate sponsored by the AFL-CIO. To hear her talk about it, you'd think NAFTA (the North American Free Trade Agreement, which removed barriers and tariffs for products traded among the United States, Mexico and Canada) was a Republican plot to destroy American jobs.

In reality, NAFTA was one of President Bill Clinton's few genuine achievements during his eight-year tenure. Like all the other Democratic candidates, Sen. Clinton was eager to disavow NAFTA before the 17,000 union members gathered in Chicago's Soldier Field.

"NAFTA and the way it's been implemented has hurt a lot of American workers," Sen. Clinton said, a position she claimed she has taken "for many years."

Funny, I don't remember First Lady Clinton speaking out against NAFTA when her husband was in the Oval Office. President Clinton managed to get NAFTA through Congress with a lot of help from Republican members, but he was in office for almost half of the agreement's 13-year history. If there were problems with the agreement, you'd think he would have tried to fix them.

Just looking at the agreement's first 10 years, seven of which were on President Clinton's watch, suggests Hillary should be touting the success of free trade, not running away from it.

As the Cato Institute reported on the 10th anniversary of the implementation of NAFTA, U.S. exports to Mexico tripled after NAFTA went into effect. And there wasn't any "giant sucking sound" from jobs leaving the U.S. to Mexico, as Independent candidate Ross Perot had warned in the 1992 presidential debates. In those first 10 years, the U.S. added 18 million new jobs to the economy. Manufacturing output actually rose by 41 percent, compared with 34 percent in the previous decade.

The Institute for International Economics estimates that trade liberalization has added an additional $9,000 a year to the typical American household. Of that, the U.S. trade representative's office last year estimated that NAFTA and the Uruguay Round (modifications of the General Agreements on Tariffs and Trade in effect between 1986-1994) alone generated $1,300-$2,000 to the average family of four. International trade allows American consumers to buy lower-priced, foreign-produced goods, while providing 1-in-5 American jobs tied to exports. And those U.S. jobs in exporting industries pay more than other jobs, an estimated 13-18 percent more, according to the U.S. trade representative.

Hillary Clinton is too smart a woman not to know this. But acknowledging that lifting trade barriers is good for America is, nonetheless, bad politics in the Democratic Party. Labor unions are obsessed with "protecting" jobs -- which, of course, is a recipe for destroying jobs in the long run since it stifles competition and increased productivity. And since unions supply much of the money and "volunteers" -- often paid union staff -- for Democratic candidates, candidate Clinton is not likely to buck them on trade.

Sen. Clinton tried to cast herself as a fighter in the AFL-CIO debate, drawing hearty applause when she noted, "For 15 years, I have stood up against the right-wing machine, and I've come out stronger. So if you want a winner who knows how to take them on, I'm your girl."

But in Soldier Field, home of the Chicago Bears, Sen. Clinton looked more like a Pander Bear than a principled politician. I guess she's more worried about losing the AFL-CIO's fat contribution to her campaign next fall -- in 2004, the AFL-CIO spent $44 million to try to elect John Kerry -- than she is about doing what's right for the economy and American families.