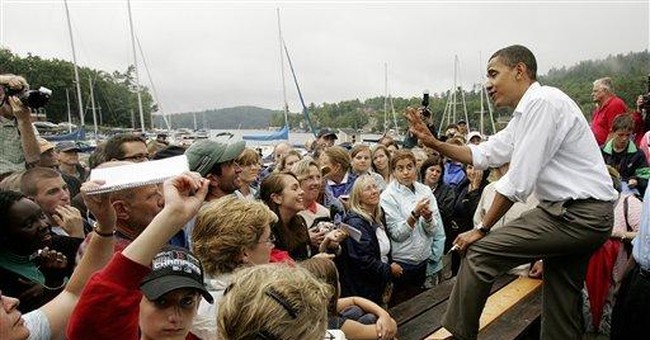 Barack Obama and John Edwards want to get us out of one war and into another. The two Democrats vying for their party's presidential nomination want to end the war in Iraq and spend at least some of the savings on a new war on poverty.

This week, Edwards finished an eight-state tour reminiscent of Bobby Kennedy's famous visit to poor Appalachian communities during his bid for the presidency in 1968, while Obama launched his crusade in Anacostia, a District of Columbia neighborhood that has historically been one of Washington's poorest.

Ending poverty is certainly a noble goal -- but from the policy proposals Obama and Edwards offered, it appears neither has a clue about how to go about it. Both men want more government spending, as if adding a few billion more to the $11 trillion that has been spent on poverty programs since President Lyndon Johnson first initiated the War on Poverty in 1964 would finally produce the desired results. Worse, some of the proposals they offered would likely harm poor families, not help them.

Obama wants to tie the minimum wage to the Consumer Price Index, which would price the lowest-skilled workers, especially young blacks, out of the job market, not to mention increase inflationary pressure on wages. Edwards would have the government create 1 million new temporary jobs for the chronically unemployed, despite abundant research that shows these programs have no lasting impact in reducing poverty or increasing long-term employment among the poor.

Poverty among families has remained amazingly constant over the last 40 years. In 2005, the percentage of all families who lived below the government-defined poverty level was 9.9 percent; in 1964, 15 percent of families lived below the poverty line, but the rate dropped to 10 percent by 1968 and has remained at roughly that level, with minor fluctuations, ever since.

In a nation as rich as ours, argue Obama and Edwards, one-in-ten American families living in poverty is simply unacceptable. I agree, but the numbers reveal a lot more complexity than either man is willing to acknowledge.

First, many of those living below poverty today are new immigrants, both legal and illegal. They are newcomers who lack the education and skills to attain a middle class life, at least initially. The poverty rate for non-citizens, 20 percent, is twice the national average, but it has declined substantially since 1993, when it was almost 30 percent; this despite the fact that there are many more immigrants here now, including substantially more illegal aliens.

A government anti-poverty program isn't the answer for this group -- and would be politically impossible given the prevailing sentiments toward immigrants today. But most of these poor families will improve their economic status the longer they are here, especially as they learn English and gain work experience. Studies show that the children of immigrants earn substantially more than their parents, frequently out-performing their co-ethnics who are native-born. And naturalized citizens have a somewhat lower poverty rate than native-born Americans.

Second, neither Obama nor Edwards addresses the issue of family breakdown and its relationship to poverty. The poor are disproportionately made up of women and their children. Poverty rates for families headed by a single white woman with children under 18 were 25.3 percent in 2005; for similarly constituted black families, the rate was a shocking 42 percent. But for married couple families, the comparable rate for whites was just 6.1 percent, and for black families it was only 8.3 percent.

So why aren't Obama and Edwards talking more about marriage as an antidote to poverty? From all accounts, both men have wonderful, even inspirational, marriages of their own. But many Democrats are worried they might not seem inclusive or might even be viewed as intolerant if they talk up marriage.

It's a lot easier to offer to increase government spending. My suspicion is, however, that most Americans understand that the War on Poverty won't be won by throwing their tax dollars behind more failed programs.