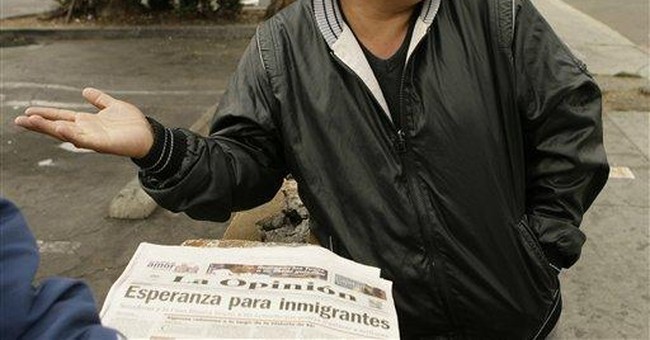 No amount of hard, empirical evidence to the contrary, and no amount of reasoned argument or appeals to decency and fairness, will convince this small group of Americans -- fewer than 10 percent of the general population, at most -- otherwise. Unfortunately, among this group is a fair number of Republican members of Congress, almost all influential conservative talk radio hosts, some cable news anchors -- most prominently, Lou Dobbs -- and a handful of public policy "experts" at organizations such as the Center for Immigration Studies, the Federation for American Immigration Reform, NumbersUSA, in addition to fringe groups like the Minuteman Project.

Stripped bare, this is what the current debate on immigration reform is all about. Fear of "the other" -- of those who look or sound different, who come from poor countries with unfamiliar customs -- has been at the heart of every immigration debate this country has ever had, from the infamous Alien and Sedition Acts of 1798 to the floor of the U.S. Senate this week.

What is said today of the Mexicans, Guatemalans, Salvadorans and others was once said of Germans, Swedes, the Irish, Italians, Poles, Jews and others. The only difference is that in the past, the xenophobes could speak freely, unconstrained by a veneer of political correctness. Today, they speak more cautiously, so they talk about the rule of law, national security, amnesty, whatever else they think might make their arguments less racially charged.

Where once the xenophobes could advocate forced sterilization and eugenics coupled with virtually shutting off legal immigration from "undesirable" countries, now they must be content with building walls, putting troops on the border, rounding up illegal aliens on the job and deporting them, passing local ordinances to signal their distaste for immigrants' multi-family living arrangements, and doing whatever else they can to drive these people back where they came from.

There is no chance this small group of xenophobes will succeed -- ultimately. The victories of their predecessors have been short-lived and so obviously wrong-headed we've always finally abandoned them, from modifying and then repealing the Asian exclusion acts to scrapping the nationalities quotas. But we need to quit pretending that the "No Amnesty" crowd is anything other than what it is: a tiny group of angry, frightened and prejudiced loudmouths backed by political opportunists who exploit them.

The status quo -- largely turning a blind eye toward the 12 million illegal aliens who work, pay taxes and keep their noses clean, while stepping up border enforcement and selective internal enforcement -- may not be the worst possible outcome in the current debate on immigration reform. It is the coward's way out of our current dilemma. But there are other problems with allowing the xenophobes to derail comprehensive immigration reform.

We've struggled long and hard as a nation to overcome our prejudices, enduring a Civil War and countless dead for the right to be judged by the content of our character not the color of our skin or where we came from. Our country is the greatest, freest, most powerful and optimistic nation in the history of the world -- and our people are good, decent, fair and the hardest working anywhere. That is why immigrants -- even those who look and sound different, from nearby and far away -- come here, often with only the clothes on their backs but a fire in their bellies to succeed. They make all of us richer, and by embracing and welcoming them, we make ourselves better.