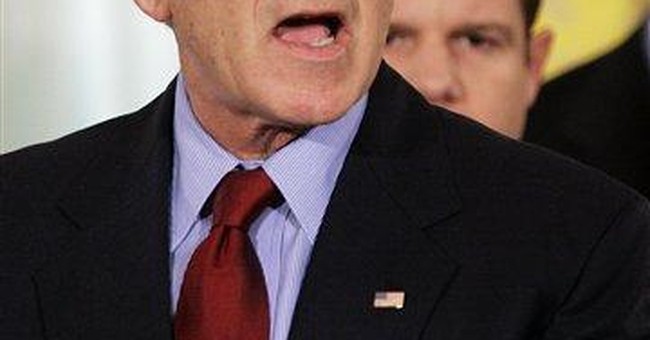 Now that they have failed to override President Bush's veto of the Iraq war funding bill, maybe Democrats can quit posturing and get down to the hard business of legislating. Democrats knew when they passed legislation setting a timetable for withdrawal of U.S. troops that it would not become law. Now they must negotiate with the White House, a process that began within hours of the president's veto.

But can Democrats resolve the dilemma they've created -- to hasten the war's end without also undermining American troops?

For all their anti-war rhetoric, Democrats are terrified of being labeled anti-troop, with good cause. One of the lessons Democrats learned after the Vietnam War was that antipathy for America's soldiers is bad politics.

Not even the most strident anti-war activists today are calling Iraq war veterans "baby killers," or spitting on them as they return home from war, as Vietnam protestors did a generation ago. A telling illustration of this reversal in tactics is the attempt by Joan Baez, a Vietnam-era anti-war activist and folk singer, to entertain injured soldiers at Walter Reed Medical Center.

Baez's "peace" activism during the 1960s included being arrested and jailed for blocking military induction centers. But this week, she was trying to sing a different tune. Army officials apparently weren't ready to forgive and forget her earlier transgressions, however, and Baez was disinvited from performing.

It is one thing to be civil to America's fighting men and women and another to support them. If Democrats insist on tying the military's hands in executing the war -- even if they drop actual pull-out timetables -- they will undermine the troops' safety. But that does not mean Congress and the Democratic majority don't have a legitimate role to play.

The problem in Iraq is not the performance or the mission of American forces. The biggest problem is that Iraq has become a battleground in an Islamic jihad against not only America and the West, but non-Islamist Muslims. Al Qaeda targets the Shiite population, while Iran and its puppets in Iraq target the Sunnis. This is not civil war as commonly understood but a proxy war between two radical extremes in the Islamic world.

But the problem is also the Iraqis -- both the government and, unfortunately, a sizeable portion of the people. Al Qaeda could not operate without the assistance, or at least acquiescence, of a significant portion of the Sunni population. Moqtada al Sadr and his ilk would not be effective if ordinary Shiites did not shield and support them. And, of course, Iraqi politicians reflect these large sectarian splits and seem incapable of doing anything to move the country forward.

If the Democrats want to be effective in changing conditions on the ground in Iraq, they should explore ways to pressure the Iraqi government to resolve its internal differences -- and punish others, including Iran, if they continue to interfere. Americans are generous, and we have given blood and money to rebuild Iraq -- but that generosity should not be limitless.

If Iraqis, for example, cannot come up with a way to share their oil wealth among different regions and sectarian groups, we shouldn't continue to pour money into rebuilding their infrastructure. If they can't rein in corruption and graft, why should we foot the bill?

The Democrats have set up the wrong benchmarks. The solution isn't to withdraw U.S. troops but to hold back U.S. dollars from re-building projects. The Bush administration has been too patient with the Iraqis, and this hasn't helped them get their act together. The Democrats could play a constructive role in stiffening the administration's backbone.

But first, the Democrats would have to recognize that we are not fighting in Iraq primarily for the Iraqis' sake but for our own interests. In order to accept that premise, Democrats would have to give up pointing fingers at the administration for "lying" us into war. Whether or not it was the right decision to go to war against Saddam Hussein in 2003, the war in Iraq is now the primary theater in the war on terror. And we have no choice but to stay until we win this battle.