Like many proponents of multiple use of public lands, I watched the SOTU address because I was intrigued by an announcement that the President would open up more natural gas development in the United States. In fact it was the only reason I watched the address. As you many of you probably know by now, my little corner of Utah is blessed with natural gas deposits. The natural gas industry comes with jobs, many of them good-paying jobs and also comes with the potential for the increase in private enterprise.

The extraction industry has accounted for the bulk of the economy in my neck of the woods and we’ve had a tough time making a go off it here since the results of the 2008 Presidential Election became reality. So I was a little let down when I discovered that the President planned to open up 75 percent of the offshore oil and gas resources. I was let down, but I understood the move. In a situation in which the country wants jobs, and the President needs votes, it makes all kinds of political sense that he announce that those states whose votes he needs will get the energy jobs. Whereas states like Utah which have the apparently bad habit of voting conservative, will have a tougher time with those energy jobs. That’ll teach us to vote our conscience!

I asked The Uintah County Commissioners about their thoughts. They deal with land and issues on a daily basis from the local, all the way up to the federal level. As people who focus on the industry as part and parcel of their workaday lives, the commissioners noted that the President’s words and his past actions did not match up. They commented that the President’s statement that production has been up in recent years is true, however that production has been up on leases on private lands, presently out of reach of the regulatory arm of the federal government. In point of fact, while the Applications for Permission to Drill or APD’s is up since 2009 the number is still much lower than before the sitting President took office, and the number of leases that have been approved for public land is miniscule compared to the amount that have been nominated. The chart below is compiled from data from the Utah State Office of the Bureau of Land Management. The blue bars represent the acres that were nominated for energy development while the yellow bars indicate the acres actually offered for development. 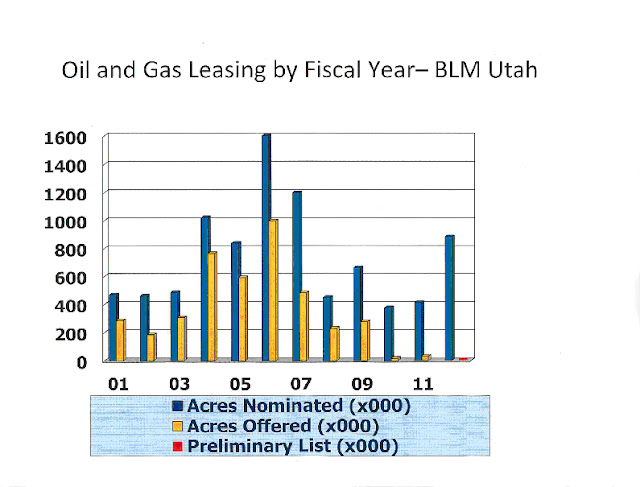 Used with the permission of the Uintah County Commission; Vernal, Utah

Under the auspices of “streamlining” the permitting process, the Department of the Interior has added new layers of  bureaucracy and review to said process, fostered a system in which energy companies must struggle through a laborious permitting process and has created The Master Leasing Program which in the case of Uintah County places 2 point 9 million acres in limbo for development as they may have wilderness characteristics and are also a part of New York Congressman Maurice Hinchey’s Red Rocks Wilderness Bill; and energy leasing ain’t just what it used to be.

One of the less known issues that hampers the development of energy in the West is that of endangered species. Despite the fact state wildlife officials in Utah, working with local government and the local offices of the BLM and Fish and Wildlife have developed a management plan for the Sage Grouse in northeast Utah and despite the fact that energy companies in the spirit of good stewardship have created and improved Sage Grouse habitat ; the BLM on the federal level has decided that it must create a Sage Grouse Management Plan for the west. Forget the duplication of activities for a moment.

A look at the map of  areas being considered for Sage Grouse habitat shows areas in which Sage Grouse have not been seen in over a decade, but is considered as “suitable”. There is also land in northeastern Utah being evaluated as to whether or not it is suitable for the Mexican Wolf. Mexican Wolf? I didn’t even know they had wolves in Mexico, let alone that they are capable of migrating almost to Wyoming. In truth they were originally found in Texas, Arizona, New Mexico and naturally Mexico, but someone has decided that they could live in eastern Utah.  Well if the habitat is suitable for the Mexican Wolf, why not the Bengal Tiger or even the Slow Loris? With 300 species about to be added to the Endangered List in the United States, and the potential for any given stretch of land to be listed as suitable for them, and thus off-limits to energy companies,  there is practically no end to the roadblocks that could be used to thwart development.

I checked with the Western Energy Alliance regarding the President’s claim that federal funding has been a necessary component of technical breakthroughs in the industry. Staff members there said that federal dollars have been a part of some research and technological advances, but also noted that in the last five years, innovations in the energy industry have come from private companies.

While multiple use advocates in the west were buoyed by the President’s words Tuesday night, his words and the actions of his administration are at the opposite ends of the spectrum, and have left many hopeful but skeptical.