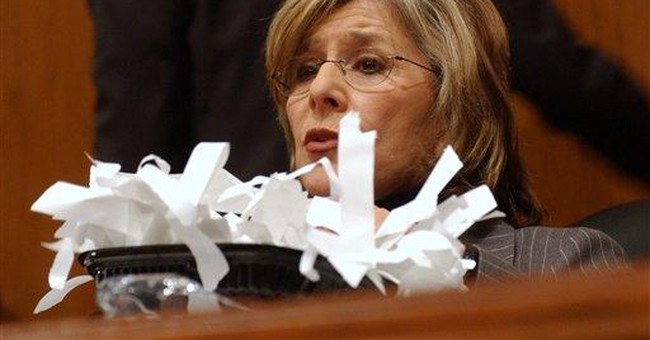 When the repugnant and self-absorbed politician Senator Barbara Boxer (D-California) belittled an Army general for respectfully addressing her as Ma’am instead of Senator, I know I was not the only person who wished the General would have responded with a stingingly clever quip. To his credit, Brigadier General Michael Walsh maintained his bearing and tact -- testaments of his self-discipline and leadership, but traits unfamiliar to most politicians.

In case you have not heard about this incident, the general was providing testimony at a hearing on the Louisiana Coastal Protection and Restoration process. Boxer scornfully interrupted Walsh after he referred to her as Ma’am.

Boxer snapped, "Y'know, Do me a favor. Could you say Senator instead of Ma'am? It's just a thing, I worked so hard to get that title, so I'd appreciate it, yes, thank you."

I could not help imagining how my father might have responded. He was a colorful Marine fighter pilot, amazingly similar to the famous "Great Santini” with the demeanor of the salty Colonel Jessep (Jack Nicholson’s character in the film “A Few Good Men”). I enjoyed musing over their possible responses to Senator Boxer. Doing so helped momentarily relieve the nausea I got thinking of this scenario.

My dad might have fired back, “No problem, Senator, and I’ll be happy to pee on your leg, too.” I can hear Nicholson’s character, saying, “Take caution in your tone, [Senator], I’m a fair guy, but this [expletive deleted] heat is making me absolutely crazy.”

Of course, these answers would have also likely gotten the good general charged with contempt of Congress and discharged from the Army. Nevertheless, I imagine most Americans would have cheered the general for firing back with one of the following zingers:

“Yes, Sir, Senator, I’ll try to remember that in the future.”

“I’ll be glad to Ma’am, if you will you explain how calling you Senator will help prevent New Orleans from flooding in the future.”

“Your state is about to go bankrupt! Could you explain exactly what you mean by having worked hard for that title?

“Ma’am, have you ever served in a fighter squadron? Ever been engaged by a Surface to Air Missile? No? Then I don’t care about your title or what you would appreciate.”

Today, only 24% of the entire Congress has ever served in the military. The selfless veterans of World War II and Korea have been replaced by men and women who grew up during Vietnam or following the end of the draft in 1973. Is there any wonder why such a waft of resentment for the military now permeates Congress? While military service does not necessarily guarantee that an individual will grasp leadership traits, I question whether politicians like Senator Boxer and her peers can accurately define words like judgment, justice, discipline, integrity, tact, bearing, unselfishness, courage, or loyalty. True leaders put what is best for those for whom they are responsible first. Boxer and her cronies obviously put themselves and re-election as their number one priority.

Furthermore, many of the veterans we have serving in Congress are unfortunately like Senator John Kerry and Congressman John Murtha, both of whom reek of anti-Americanism. What’s more disheartening is that we end up with presidential candidates like the current “Commander in Chief.” His socialist ideology and contemptuous attitude towards America only fuel speculation on the extreme Right that he may be some type of Islamic or communist mole.

Back to Senator Boxer: have you thought about what you would be called then, Ma’am?