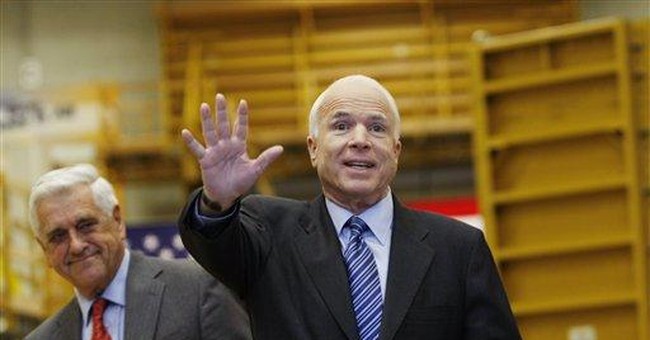 Without knowing you personally, I have judged you rather harshly during your campaign based on what I consider some lousy decisions in your past and public service. In forming those judgments, however, I did not consider the full-time job I have trying to make the right decision all the time myself. We should all probably look very closely in the mirror before condemning someone else, especially regarding decisions in his distant past. For failing to practice what I know is wise, I sincerely apologize to you.

I am an every-day guy, Senator McCain. I realize that the blessings in my life are owed to God, family, country, and fellow Americans. I am proud to have served America as a Marine. And today, I am trying to inspire young people to make the most of the opportunities America provides them. I believe I have discovered my “Greater Cause” in contributing to the lives of students and in encouraging them to rely on facts, not feelings.

During your convention, you offered many encouraging words and facts. Among them, I heard you say, “I will keep taxes low and cut them where I can… I will cut government spending… Keeping taxes low helps small businesses grow and create new jobs. Cutting the second highest business tax rate in the world will help American companies compete and keep jobs from moving overseas…Reducing government spending and getting rid of failed programs will let you keep more of your own money to save, spend and invest as you see fit.”

Senator McCain, your opponent is planning to ruin our country by increasing taxes so that he can pay for more failed government programs. He knows his government programs will not succeed, but they will win him votes from people who think America owes them something. I know you do not favor harsh interrogation methods, but it is past time for you to unveil why you are not Mr. Congeniality in Congress. Take your opponent to task for his tax plans to wreck our great country.

I am not an accountant or tax lawyer, just an average guy. I think part of the problem with our tax code is that ordinary guys with common sense did not write it. Americans do not need more cockamamie solutions from self-proclaimed liberal geniuses with Ivy League degrees. We simply need easy-to-understand, easy-to-implement solutions for common folks.

Senator McCain, you have probably heard that God himself asks for only 10% of his disciples’ prosperity. So why does the American government expect us to pay more than God does? I mean, if everyone paid 10% across the board, wouldn’t that be the fairest system you could devise? Simply smite all deductions and require everyone –including our largest corporations to pay 10% of what they make. It’s simple math. Even I can do it.

Furthermore, it’s God’s plan. You can guarantee it will work! Your advisers could probably come up with a clever slogan tying it to Governor Palin, too, as most ordinary guys like me consider her a political “10,” in addition to the perfect-vice-president candidate.

Anyway, the entire transition could be based simply enough on derivatives of 10. First, freeze the current tax law where it is –NO NEW PROGRAMS. Then --over the next 10 years-- reduce existing deductions, tax rates, etc. by 1/10 each year, until all rates are 10% --with absolutely no deductions for anyone. In 10 years, you would have eliminated all perks --that means no special interest groups-- and every taxpayer would be paying 10% regardless of what he makes. I am no expert, but I would think this would throttle every corrupt, bloodsucking politician and lobbyist in Washington.

Any person who tries to cheat the system would have to pay 10 times what he was supposed to pay. This would be an easy penalty to enforce, as well as an excellent deterrent, which would motivate all of us to do the right thing.

In fact, the new system would be so effective that during the 10-year-transition period, you could also reduce the size of the IRS by 10% each year. This would help you out a lot in reducing government spending. By the time the 10th year rolls around, you would have reduced the IRS down to 1/10th of its current size! What rational voter is not going to vote for that?

Again, as just a normal American guy, I hope you will consider simplifying our nation’s tax system so that other folks like me can understand it.

I just thought I’d throw this idea out there for you to consider because your opponent boasts of being a self made man, and he obviously worships his creator. Nevertheless, I guarantee that you, your campaign, and America would benefit from a real tax plan sent from Heaven.