More “Hateful” Propaganda from the Left 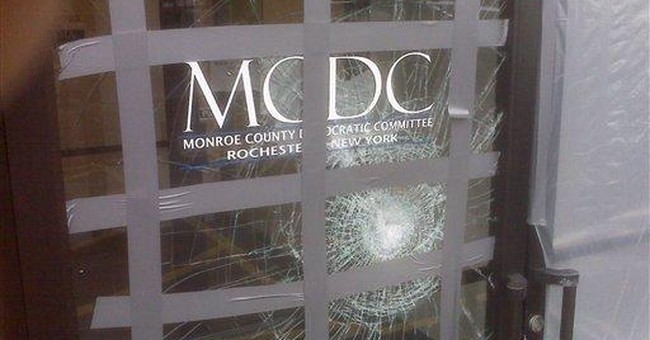 They've gotten what they wanted, and now it's time to castrate their opponents by smearing them all as terrorists. And "let us be clear," as the Obamessiah would state it; that is exactly how they intend to paint you.

How do they do it? By locating an idiot or two who gets hostile, a trumped-up account that cannot be proven, or even a story that has been disproven - no matter - and then spinning that out as the apotheosis of their political opposition. Just as was done from the Kremlin to Pravda, the word goes out that this is the meme to be disseminated, and Big Media will dutifully repeat the lies over and over again as if it is conventional wisdom or gospel truth.

Check out this nonsense:

From Mort Kondracke (who should know better):

"And [Democrat voters] may be further motivated by the ugliness demonstrated by Tea Party opponents of the measure — racist and homophobic slurs and threats of violence — and the condoning of misbehavior by some Republican leaders."

There is not a single Republican leader who has "condoned" violence. (I have no idea what Kondracke means by "misbehavior"). NOT ONE.

And Eugene Robinson. First he accuses Republicans of not quelling the angry sentiments: "One would expect responsible Republican leaders to do everything in their power to lower the temperature."

Then, after acknowledging that both Republican leaders and leaders of tea parties had in fact denounced any use of violence, he writes,

"But this strikes me, and probably will strike others, as disingenuous. The tea party movement is fueled by rhetoric that echoes the paranoid ravings of the most extreme right-wing nutcases. When tea party leaders talk about the threat of "socialism" and call for "a new revolution" and vow to "take our country back," they can say they are simply using vivid metaphors. But they cannot plausibly claim to be unaware that there are people -- perhaps on the fringe of the movement, but close enough -- who give every sign of taking these incendiary words literally. And does anyone doubt that the movement attracts the kind of people who take these words literally?"

Oh, I get it. Because some people out there don't understand metaphor, using it is inciting violence.

Newsflash, Mr. Robinson: "Socialism" isn't a "paranoid raving," it is literally what Obama is sending us hurtling towards. A lot of us don't like it. "Taking our country back" is not threatening violence. There is a way to do it, and it's called VOTING. Can voters create a "revolution" at the ballot box? Of course.

And then there's Paul Krugman, who seems to be living in an alternate universe. He has his own glee: "I admit it: I had fun watching right-wingers go wild as health reform finally became law."

But he's upset that everyone isn't as gleeful. This quote is priceless: "For if you care about America’s future, you can’t be happy as extremists take full control of one of our two great political parties."

And then there is this choice excerpt: "To be sure, it was enjoyable watching Representative Devin Nunes, a Republican of California, warn that by passing health reform, Democrats 'will finally lay the cornerstone of their socialist utopia on the backs of the American people.' Gosh, that sounds uncomfortable."

What a pompous ass. As an economist, he should be well aware that the tax and debt burden borne by the American people will be more than uncomfortable, as it crushes innovation and economic growth, and results in the very rationing of health care that Obama has promised (and lied) would never happen.

But your discomfort doesn’t matter. Because you don’t matter. Want proof? Everything you need to know about the fundamental creed of these self-appointed visionaries is contained in this pearl of Krugmanite wisdom: "A side observation: one Republican talking point has been that Democrats had no right to pass a bill facing overwhelming public disapproval. As it happens, the Constitution says nothing about opinion polls trumping the right and duty of elected officials to make decisions based on what they perceive as the merits."

Doesn't that just warm your heart? We know better that you, you bunch of drooling neanderthals. You didn't elect us to represent you; you elected us to rule over you.

Finally, there is this staggering combination of complete denial and rhetorical sleight-of-hand: "All of this goes far beyond politics as usual. Democrats had a lot of harsh things to say about former President George W. Bush — but you’ll search in vain for anything comparably menacing, anything that even hinted at an appeal to violence, from members of Congress, let alone senior party officials."

Note what Krugman has done here. When complaining about conservatives' conduct, he points to the behavior of the odd loony and subsequently smears Republican political leadership with that dung. But then he tries to redeem Democrats by referring only to "members of Congress" or "senior party officials."

This is breathtaking deception. First, NO Republican member of Congress has used "menacing" language or "appealed to violence."

Second, Krugman had better check his history. (But then, Leftists are notorious for ignoring or rewriting history when it suits their purposes.) Democrat members of Congress used language that was more than "harsh," accusing Bush of lying, and calling for his impeachment. Does Krugman not think that Senator Byrd's comparison of Bush to Hermann Goering is not "menacing"? That characterizing Bush as Hitler, analogizing the Bush administration to the Third Reich, and comparing Americans who listen to Rush Limbaugh as "unthinking brownshirts that terrorized millions,” by groups as closely aligned with the Democrats as democrat.com and MoveOn.org is not inflammatory?

And if “silence” is the new “menacing,” where was the Democrats’ outrage at the film, “Death of a President,” which depicted the assassination of President Bush?

What about the media’s vulgar sexual slurs of Americans protesting at tea parties? And this was done not by some obscure Lefty blogger posting in his pjs, but by the so-called “mainstream” press!

Hypocrisy, thy name is “progressive.” Victor Davis Hanson at National Review got it right yesterday when he wrote, “Like it or not, between 2001 and 2008, the ‘progressive’ community redefined what is acceptable and not acceptable in political and public discourse about their elected officials. Slurs like ‘Nazi’ and ‘fascist’ and ‘I hate’ were no longer the old street-theater derangement of the 1960s, but were elevated to high-society novels, films, political journalism, and vein-bulging outbursts of our elites.”

So I don't have any sympathy for Democrats whose feelings are hurt by strong language, when they rammed through a health care bill that 54% of the population didn't want, using procedures intended to correct typos, manipulating the legislative process with threats and bribes because they couldn't even get the votes of their own party members! (Bart Stupak said his life was “a living hell”? This was before he voted for the health care bill. Who threatened an ethics investigation of Mr. Stupak? The tea partiers?)

But it must be said that at least in one respect, what Mr. Krugman said is absolutely true. Nothing in the Constitution requires the representatives elected by the people to do the will of the people. But we kind of expect them to, nevertheless. That's why we called their offices, and showed up at their townhalls by the thousands and protested in D.C. And when our elected representatives don’t do what we want, we vote them out.

Throughout history, there have been strong differences of opinion in the political arena. But this group is different. They show not merely disregard for Americans, but condescension and disdain. It is they who are a blot on the face of representative democracy, not those of us who are upset with them. Come November, they will be gone. And if Democrats choose to ignore that advance notice, or characterize it as “hate speech,” then so be it.

Conservatives and Republicans need to brush off this latest psy-ops salvo from the Left and call it out for what it is: a manipulative campaign of mass disinformation and political propaganda.