Newsflash: They don’t want a “stimulus” 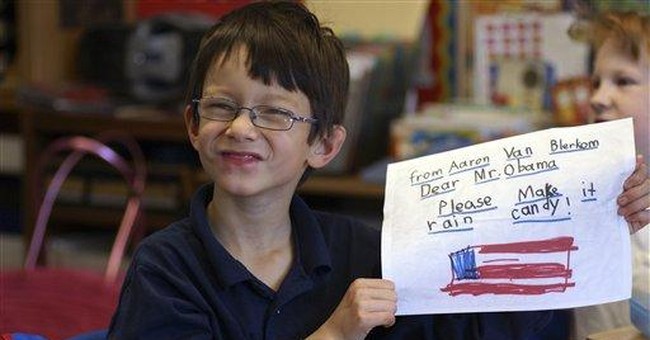 There is a principle called “Occam’s Razor,” which has been interpreted to mean that the simplest of two competing theories is usually the right one.  This comes to mind as President Obama and the flying monkey minions in Congress scramble frantically to ram a trillion dollar “stimulus” bill down American’s throats with no debate, no discussion, and almost no understanding of what is in it.

And what is in it makes it abundantly clear that this is no “stimulus.”  It is riddled with hundreds of billions of dollars in pork, payoffs to special interest groups, massive increases in welfare spending, new and more bloated federal bureaucracies.  What’s worse, we don’t actually have the money for any of it.  It will have to be taxed, printed, and borrowed, all of which will make our economic situation worse, not better.

But … but … the President and the Democrats don’t know this?

Of course they do.  For weeks, seasoned and well-respected economic and financial writers from the Wall Street Journal, National Review, the Weekly Standard, the Heritage Foundation, the Cato Institute, Americans for Tax Reform, the American Enterprise Institute, the Hoover Institution, and God-only-knows how many others have been explaining why this bill will not jump-start the economy.  Even the Congressional Budget Office has admitted it will make things worse.

Obama ignores them all, and continues to preach what he knows is a lie: that this bill is something that we “must” do to “save” the economy.

This seems inscrutable to most of the commentators I have heard, who protest even more loudly that Obama’s “Keynesian” economic policies have failed everywhere they’ve been tried.  And many Americans who voted for Obama – but not, they thought, for this - seem just as baffled: Does Obama not understand?  Does he know no history?  Has he not heard what the experts are saying?  Maybe he is listening to other economists.  Perhaps he’s misinformed. Maybe he’s being misled by his advisers.

This is where Occam’s Razor comes in.  None of those explanations makes any sense.  Obama is not stupid.  He has read history.  He isn’t misinformed.  And he is not being misled.  The policies Obama is espousing have been thoroughly discredited for decades, and he knows it.  So there is only one logical explanation: he doesn’t want a real stimulus.

How better, then, to obtain the dictatorial power you crave, than to ensure that an economic crisis becomes a catastrophe?  Why else would the Pollyanna of Hope and Change have suddenly become the Jeremiah of Doom and Gloom?

While I hear much discussion about how nothing in the steal-from-us bill makes sense from the standpoint of economic recovery, I hear very little to the effect that the bill’s content and enactment process makes perfect sense when one admits that Obama’s views are essentially Marxist.

Despite the expected denials (and we heard these before the election as well, which tells you plenty), there is ample evidence of Obama’s inclinations:

1.        The African father that abandoned Obama and his mother was a Communist;
2.       Obama’s childhood mentor was rabid America-hater, and Communist pervert Frank Marshall Davis;
3.       Obama himself has admitted that in college he sought out the most left-wing comrades he could find to associate with;
4.       For 20 years, he attended a church whose pastor preached a philosophy that was not only racist, but also steeped in Marxism;
5.       Obama brags about his “community organizer” experience in the mode of Saul Alinsky, whose book , “Rules for Radicals” is just another Marxist text for a “people’s revolution” from within the system.
6.       His election was – and continues to be celebrated by Communists around the globe.  (Hey, if they think he’s one of them, who are we to argue?)
7.       In addition to the federalization of financial institutions, Obama has already set CEO salaries by fiat, and is pushing for control over the census, and the media (that is, that part of the media that doesn’t lick his feet like a lapdog).

More to the point, Obama’s collusion with the most left-wing democrats in Congress to ram through policies by burying them in monstrous unreadable bills (over 1100 pages at last count) filled with pork is straight out of the socialist playbook about how to use the democratic system to permanently take over a democratic government.  F.A. Hayek in The Road to Serfdom explains it thus:

“Parliaments come to be regarded as ineffective ‘talking shops,’ unable or incompetent to carry out the tasks for which they have been chosen. The conviction grows that if efficient planning is to be done, the direction must be ‘taken out of politics’ and placed in the hands of experts – permanent officials, or independent autonomous bodies.  This difficulty is well known to socialists…”

Hayak further explains the socialists’ view that their ideal “government must not allow itself to be too much fettered by democratic procedure,” and quotes early 20th century socialist legal theorist Professor Harold Laski, who warns that a Socialist government “can[not] risk the overthrow of its measures as a result of the next general election.”

In that vein, consider the following quote:

“The next President should act immediately … If that means attaching a health-care plan to the federal budget, so be it. This issue is too important to be stalled by Senate protocol.”

Who is speaking there? Tom Daschle, the now-disgraced tax cheat who was Obama’s original pick for head of Health and Human Services, in his book, “Critical: What We Can Do About the Health Care Crisis.”   Despite Daschle’s withdrawal, his recommendations were taken.  Thus we have in this alleged “stimulus” bill the creation of the National Coordinator of Health Information Technology, and the Federal Coordinating Council for Comparative Effectiveness Research – a group of bureaucrats who will have the power to decide what medical treatment you get, if you get it.  This politburo, of course, will not be elected, will be answerable only to the President, and once established, nearly impossible to remove.  So, now Obama’s federal government will gradually take over all of the health care industry, via a bill that no one read, and in ways that will not be able to be undone.

Alinsky would be proud.  As would Laski.  And Marx.

Some in Obama’s inner circle have been more honest about it than others.  The President’s chief of staff, Rahm Emanuel, for example, said "You never want a serious crisis to go to waste … This crisis provides the opportunity for us to do things that you could not do before."

We need to stop kidding ourselves, stop playing along with this trainwreck, and tell the truth: neither President Obama nor the Democrats in Congress want to stimulate the economy.  What they really want is to bring America to its knees, setting the stage for their takeover.  This is no stimulus package.  It is a Trojan horse.

All of the blogosphere, on talk radio, and in other alternative media, the sense of outrage is growing.  And the people are asking, “But what do we do about it?”  The question of what is to be done is for the next column.  Stay tuned.