Reasons Not to Vote for Barack Obama, In His Own Words 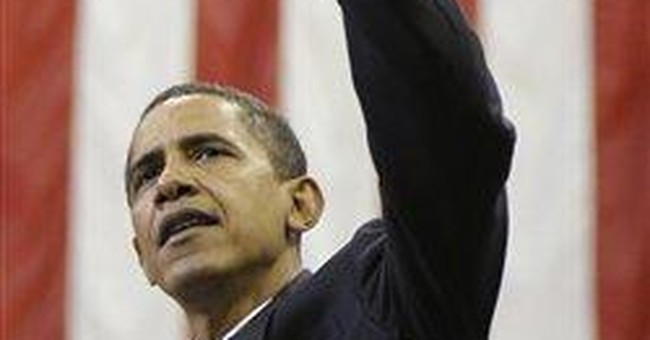 It’s down to the wire.  Is there anything left to be said?  Any argument that will persuade those still waffling, or change the minds of those still inclined to vote for Obama?  I think so.  So I’ll offer one last observation of my own.  And here it is: Obama supporters point with dewy-eyed admiration to his years as a “community organizer” as proof of his readiness to lead.  What they overlook is the fact that a commitment to ideological stealth (read “deception”), a philosophy of class and race envy, a deeply-held resentment of those who have been successful, a disdain for the foundational documents of the nation, a messianic sense of personal superiority, and a willingness to attack those who disagree with you through use of the political machine -- may seem like valiance when done by a struggling underdog.  But those same attitudes, inclinations and tactics take on a very different aspect when the person with them is the most powerful human being on the planet.

Now I’m going to let Obama speak for himself in this rest of this article.  Despite the monolithic efforts of our Pravda press to bury, suppress, deny and cover up for Barack Obama and his anti-business, anti-life, anti-white, and anti-American sentiments, laudable efforts of the few principled journalists we have left in this country have unearthed speeches and interviews with the Anointed One that make the case against the possibility of his presidency far better than any pundit or columnist could.

So why take our word for it, when you can listen to what Barack Obama himself has said?  In these last few hours before you vote, as you contemplate what you are looking for in the leader of the free world, here are just a few of Obama’s Greatest Hits for you to ponder:

The President takes an oath to “preserve, protect, and defend the Constitution. “

But Obama says:  “The Constitution is a flawed document.”

The President appoints U.S. Supreme Court justices, who serve for life once confirmed by the U.S. Senate.

But Obama’s view of the Supreme Court:  “[It] never ventured into the issues of redistribution of wealth … It didn’t break free from the essential constraints that were placed by the founding fathers in the Constitution.”

The reason Justice is represented in American with scales and a blindfold is because judges are supposed to dispense justice without regard to who is before them.

The President’s energy policy should benefit users and providers of energy.

So let’s listen to Obama’s views of energy policy: “[U]nder my plan of a cap and trade system, electricity rates would necessarily skyrocket.”  And “If somebody wants to build a coal power plant they can, it's just that it will bankrupt them because they are going to be charged a huge sum for all that greenhouse gas that's being emitted.”

The President should extol the American promises of protection of life, liberty and the pursuit of happiness.  Here’s Obama’s view of the value of human life:  “That’s above my pay grade.”

The American economic system rewarding individual initiative has created more prosperity for more people than any other system in human history.  We now know that higher taxes crush new business and business growth, and reduce jobs.

And perhaps less well-known, in an interview with ABC News, anchor Charlie Gibson asked, “[I]n each instance, when the rate dropped, revenues from the tax increased; the government took in more money. And in the 1980s, when the tax was increased to 28 percent, the revenues went down.  So why raise it at all, especially given the fact that 100 million people in this country own stock and would be affected? “

Here’s what  Obama says:  “Well, Charlie, what I've said is that I would look at raising the capital gains tax for purposes of fairness.”

And what about Obama’s view of the First Amendment?  Threats of criminal libel prosecutions, Justice Department intimidation, and no promise to veto the “Fairness Doctrine” if his compatriots in Congress pass it.

The President’s most significant responsibility is the safety of the American people.

Last, but not least, my personal favorite.  A quote not from Barack Obama, but his wife, Michelle, when asked about her husband running for President.

Michelle Obama’s views about her husband running for President?  “It’s way too soon.  He hasn’t done anything yet.”

I couldn’t have said it better myself.  Now if we could just keep it that way.