Harry Potter and the Inevitable End 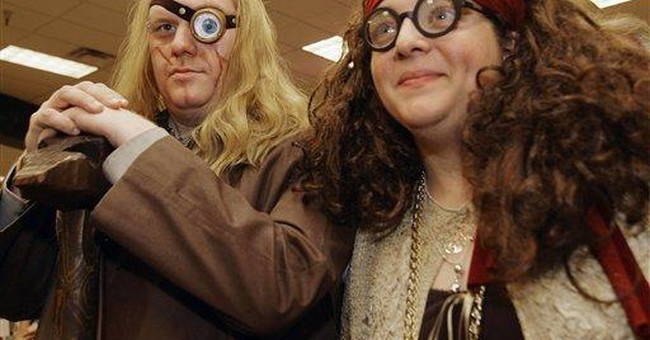 Warning: This review contains MAJOR spoilers. Do NOT read if you don't want to know how the Harry Potter series will end, who will die, and who will survive.

J.K. Rowling’s epic tale about an orphan boy who discovers he’s a wizard at age 11 comes to an end in Harry Potter and the Deathly Hallows.

The seventh and final book in the series sold a reported 11 million copies in the first 24 hours on sale, which broke the record for fastest-selling book. Rowling’s Harry Potter and the Half-Blood Prince held the previous record at nine million.

The seven-book series has sold more than 325 million copies worldwide. The first five books have been made into top-grossing movies, and Rowling has been named one of the richest people in the world.

Not bad for a former divorced welfare mother who nursed cold cups of coffee in a café while writing the first book.

Love it or hate it, Harry Potter is a cultural phenomenon. The series has produced a collection of books, research papers, blogs, podcasts, fan fiction, and fan conferences devoted to analyzing the text, positing theories, dissecting clues, and pouring over minutiae. The long tail of Harry Potter is so vibrant, even fans have fans.

Over seven books, Rowling has done a stellar job capturing our imaginations and immersing us in a wondrous world of magic, where the universal struggle between good and evil unfolds. Choice, loyalty, forgiveness, love, and sacrifice are major themes in the books. At the ripe middle age of 40, I’m not the least bit abashed to confess my affection for these “children’s” tales and for the way Rowling presents these themes in an engaging context.

The first 500 pages of Deathly Hallows are a hardcore Potter fan’s dream. Rowling superbly sets the novel’s tone in the first chapter, bringing on stage Severus Snape, arguably the most intriguing character in the entire series, though we don’t see nearly enough of him in the 759-page book.

After a heart-pounding airborne battle at the start, where two characters meet their demise, Rowling takes her time acquainting the reader with a setting that lacks the structure of a typical school year at Hogwarts School of Witchcraft and Wizardry. The Ministry of Magic has fallen to Lord Voldemort, the minister is dead, the Death Eaters are on the move, and 17-year-old Harry, Ron, and Hermione are on the run. No more Quidditch matches or treacle tart.

In the ensuing Horcrux hunt, the trio stumbles upon the legend of the “Deathly Hallows,” mysterious objects referenced in a book of wizard children’s fairy stories. But the objects are not legend. They are real and powerful, and Harry must decide if finding them is more important than finding Voldemort’s Horcruxes, the keys to vanquishing him.

The last third of the book races to the inevitable showdown between Harry and Voldemort at Hogwarts, with more deaths along the way. Wizards and magical creatures alike take part in the Armageddon-like war.

Overall, Rowling delivered what she promised in this well-plotted book, though it seems rushed toward the end. For instance, Snape’s true loyalties are revealed in one, too-short chapter, and the duel between Harry and Voldemort left me longing for more blood, tension, and terror. And Rowling didn’t have the heart to kill off main characters other than two we expected to die.

In a previous Townhall column, Harry Potter and the Charmed Christians, I wrote about Christian-themed elements in the series (and touched on the occult controversy surrounding the books). Influenced by the work of John Granger, an Orthodox Christian, homeschooling father, college professor, blogger, and author of Looking for God in Harry Potter, I began to see these themes more clearly.

Rowling’s use of Christian themes and symbols across the series has been subtle, compared to how she uses them in the final book. Referring to earlier books, Granger writes, “Harry always dies a figurative death and is saved by love in the presence of a Christological symbol. The resurrection at story’s end each year is the culmination of that year’s cycle and transformation.” Rowling’s use of this imagery “marks her as a writer in the English traditions of writing faith edifying literature, what is often called ‘baptizing the imagination’ or ‘smuggling the gospel.’”

In Deathly Hallows, Harry’s death and resurrection are more than figurative. A strong theme in the series is substitutionary sacrifice, laying down one’s life to save others. In the final book, Harry believes he must die, so he willingly goes to his “death.” His willingness to die for others saves him, and he’s resurrected, in a sense. Harry’s sacrificial death defeated death.

And Christian readers can’t miss the symbolism of the Deathly Hallows themselves, three objects that conquer death.

Across the series, wizards celebrate and observe Christmas and Easter and sing carols, but in Deathly Hallows, we learn that wizards are buried in a churchyard in Godric’s Hollow. On Harry’s parents’ headstone is the Bible verse, “The last enemy that shall be destroyed is death” (1 Corinthians 15:26). The headstone of late headmaster Albus Dumbledore’s mother and sister reads, “Where your treasure is, there will your heart be also.” (Matthew 6:21)

I suspect the series will become a classic, and future generations will discover its treasures. As John Granger explains, the series is so popular because it contains “themes, imagery, and engaging stories that echo the Great Story we are wired to receive and respond to.”

Rowling may not have had such elevated intentions, but something in her stories resonates with millions all over the world. And it’s not Quidditch.

The Thread That Shreds CNN's Fake News idiocy...And This Is Just the Tip of the Iceberg
Matt Vespa
Want to Guess How Long It Took Tucker Carlson to Shred Democrats' Illegal Alien Figure?
Matt Vespa
Is This Why Jim Acosta Went to CPAC?
Matt Vespa
Here's What Ted Cruz Is Doing to Keep Democrats from Packing the Supreme Court
Bronson Stocking

The Thread That Shreds CNN's Fake News idiocy...And This Is Just the Tip of the Iceberg
Townhall
Blue-check journos RAGE at the White House over new plan to start charging for daily Covid-19 tests
Twitchy
Teacher Asked Students to List Their Political Party and Why, Then Publicized Their Responses, It Didn't End Well
Redstate
Vatican Betrays Virgin Mary for Prophet Muhammad
PJ Media