States Fighting Back on Illegal Immigration 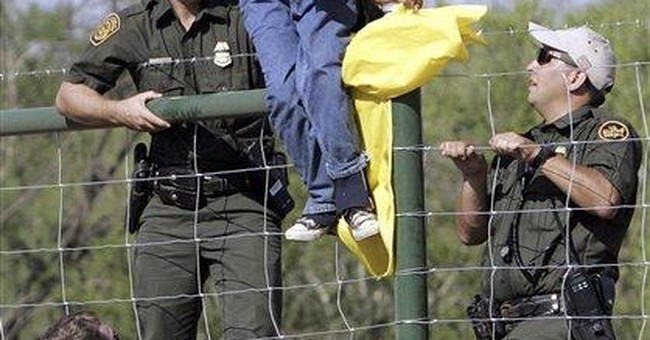 It’s time for state and local governments across the country to focus on individuals and businesses that hire illegal aliens. Our southern border will remain porous until the feds decide to do their job, but there would be far fewer border crossings if illegals had no jobs for which to cross the border.

The federal government refuses to enforce current laws, and Congress recently tried to pass new laws to legalize millions of illegal aliens. State and local governments have little choice but to act and protect taxpaying citizens.

Several states already have made bold moves. In 2004, 56 percent of Arizona voters approved Proposition 200, which requires individuals to produce proof of citizenship before registering to vote or applying for welfare. Public officials who fail to report individuals who can’t produce the necessary documents face misdemeanor charges, fines and citizen lawsuits.

But that doesn’t go far enough. Illegal aliens are such a strain on Arizona taxpayers (an estimated $1.3 billion annually) that last week, Governor Janet Napolitano, a Democrat, signed into law what’s being dubbed the toughest sanction against employers who hire illegal immigrants, the Arizona Republic reported. Scheduled to take effect on Jan. 1, 2008, the law will require Arizona employers to verify the status of employees through the Basic Pilot Program. First offenders who “knowingly” hire illegal immigrants will lose their license for up to 10 days. Second offenders (on probation) face permanent license revocation.

Two months ago, Oklahoma’s Democratic governor Brad Henry reluctantly signed into law a similar bill. And Georgia just enacted a law Governing magazine called “the most stringent statute of its kind anywhere in the country.” Between 2000 and 2005, Georgia’s illegal alien population doubled. A mass of non-English speaking illegal aliens burdened the courts and the schools, and Georgia residents said, “Enough!” Law enforcement agencies now will have more authority to enforce immigration laws, and state and local agencies and employers will have to verify applicants’ residency.

Additionally, state and local governments can apply for 287(g) training, part of The Illegal Immigration Reform and Immigrant Responsibility Act. This section authorizes the secretary of the Department of Homeland Security to “enter into agreements with state and local law enforcement agencies, permitting designated officers to perform immigration law enforcement functions.” The town of Herndon, Virginia, applied for and was accepted into the 287(g) training program.

Real immigration reform would strengthen immigration law enforcement, streamline the process for becoming a permanent resident or citizen, and clear the immigration backlog. Phony immigration reform — proposed by open-borders politicians — is all about making sure unscrupulous businesses and elites have plenty of low-pay Central American workers around to keep wages down.

The next battle also should center on correcting the misapplication of “birthright citizenship,” which was never intended to grant automatic citizenship to babies of illegal aliens.

We can’t stop illegal border crossings. People will continue risking life and limb to enter what truly is a land of milk and honey. But America will cease to be a great nation if we forget that the rule of law — and not just employment opportunities — is why America is great.