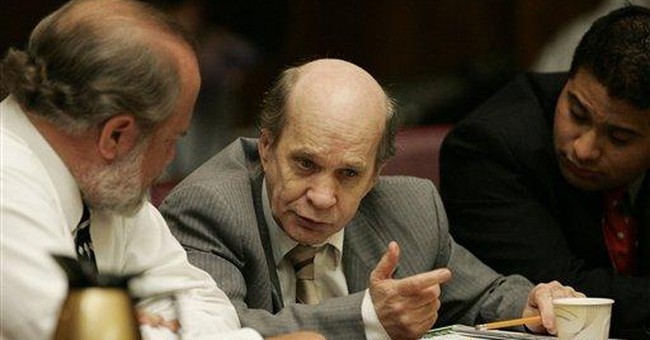 On the morning of March 2, 1998, a loser named Patrick Kennedy brutally raped his wife’s eight-year-old daughter.

Afterward, Kennedy called 911 and told the dispatcher that two black boys had raped the girl in the yard. Likely under threat by the rapist, she confirmed Kennedy’s story.

The child’s injuries were extensive. According to the opinion, the victim’s “predominate injury was vaginal with profuse bleeding. Her entire perineum was torn and her rectum protruded into her vagina.” Dr. Scott Benton, who testified at the trial, said the girl’s injuries “were the most serious he had seen, within his four years of practice, that resulted from a sexual assault.”

Police suspected Kennedy was lying from the beginning. Their suspicions were confirmed after learning that he’d called his employer before calling 911, said he wouldn’t be able to come to work, and asked how to get blood out of white carpet. His wife’s daughter had “just become a young lady,” he reportedly said.

Kennedy was found guilty of aggravated rape and sentenced to death. He asked for a new trial on the grounds that a death sentence for rape in which the victim survives was unconstitutional, but the motion was denied. Kennedy appealed to the Louisiana Supreme Court.

Before 1977, aggravated rape was punishable by death in Louisiana. The U.S. Supreme Court ruled in 1977 that capital punishment for raping an adult woman was cruel and unusual. In 1995, Louisiana brought back the death penalty for rape but limited it to the rape of a child under 12.

Allowing prosecutors to seek the death penalty for child rapists seems to be gaining ground. At least four other states – Georgia, Montana, Oklahoma, and South Carolina – have added the death option to their versions of “Jessica’s Law,” named for Jessica Lunsford, a nine-year-old child raped and buried alive in Florida by a man with prior sex crime convictions.

Under the Florida law, a defendant faces a mandatory minimum sentence of 25 years in prison and lifetime electronic monitoring for “lewd or lascivious acts” committed against a child under 12. Committing sexual battery or raping a child under 12 is a capital offense in that state. If convicted, a pedophile faces only two possibilities: death or life in prison with no chance of parole. The governor of Texas has promised to sign a similar bill with a death penalty option into law.

Will sentencing child rapists to death deter future child rapes? Of course not, but deterrence isn’t the only reason to mete out the death penalty.

The concept of retributive justice underpins our nation’s criminal laws. In our pampered, politically correct, psycho-babbling society, we’ve forgotten that criminals must be punished – not merely removed from society or rehabilitated – and punishing criminals is just, whether or not punishment deters future crimes.

Our government is charged with protecting citizens and punishing lawbreakers, and perverts who hurt the most vulnerable citizens should receive harsh punishment. Man’s idea of harsh punishment, however, pales in comparison to God’s. One day each of us will face the ultimate Judge. I hope Kennedy and other child rapists suffer for all eternity in the deepest bowels of hell.

But then again, I harbor a politically incorrect bias against child rapists.