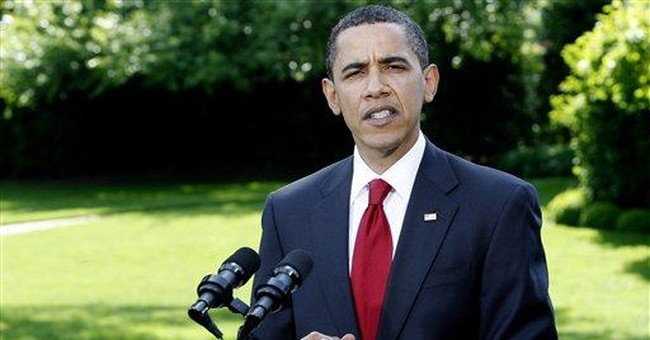 Does anybody really believe that adding 50 million people to the public health-care rolls will not cost the government more money? About $1.5 trillion to $2 trillion more? At least.

So let’s be serious when evaluating President Obama’s goal of universal health care, and the idea that it’s a cost-cutter. Can’t happen. Won’t happen. Costs are going to explode.

Think of it: Can anyone name a federal program that ever cut costs for anything? Let’s not forget that the existing Medicare system is roughly $80 trillion in the hole.

And does anybody believe Obama’s new “public” health-insurance plan isn’t really a bridge to single-payer government-run health care? And does anyone think this plan won’t produce a government gatekeeper that will allocate health services and control prices and therefore crowd-out the private-insurance doctor/hospital system?

The president, in his New York Times Magazine interview with David Leonhardt, said his elderly mother should not (in theory) have had a hip-replacement operation. Yes, Obama would have fought for that operation for his mother’s sake. But a federal board of so-called experts would have told the rest of us, “No way.”

And then there’s the charade of all those private health providers visiting the White House and promising $2 trillion in savings. Utter nonsense.

And even if you put aside the demerits of a government-run health system, Obama’s health-care “funding” plans are completely falling apart. Not only will Obama’s health program cost at least twice as much as his $650 billion estimate, but his original plan to fund the program by auctioning off carbon-emissions warrants (through the misbegotten cap-and-trade system) has fallen through. In an attempt to buy off hundreds of energy, industrial, and other companies, the White House is now going to give away those carbon-cap-emissions trading warrants. So all those revenues are out the window. Fictitious.

Anyway, the cap-and-tax system won’t pass Congress. The science is wrong. The economics are root-canal austerity -- Malthusian limits to growth. And there are too many oil and coal senators who will vote against it.

All of this is why the national-health-care debate is so outrageous. At some point we have to get serious about solving Medicare by limiting middle-class benefits and funding the program properly. There is no other way out. We can grow our way out of the Social Security deficit if we pursue pro-growth policies that maintain low tax and inflation rates. Prospects for that don’t look any too good right now, though it could be done. But government health care is nothing but a massive, unfunded, middle-class entitlement problem. (The poor are already in Medicaid.)

Sen. Max Baucus (D., Mont.) proposes to solve health care by limiting employer tax breaks. He’s on to something, but he’s only got half the story. All the tax breaks for health care should go to individuals and small businesses. Let them shop around for the best health deal wherever they can find it with essentially pre-tax dollars.

Additionally, insurance companies should be permitted to sell their products across state lines. And popular health savings accounts -- which combine investor retirements with proper insurance by removing the smothering red tape -- should be promoted. This approach of consumer choice and market competition will strengthen our private health-care system.

So private enterprise can coexist with public health care and not be crowded out by the heavy-handed overreach of government. But the Obama Democrats are determined to force through a state-run system that will bankrupt the country.

I’m not somebody who obsesses about the national debt or deficit. But I have to admit: Today’s spending-and-borrowing is blowing my mind. As a share of GDP, we’re looking at double-digit deficits as far as the eye can see. Over the next ten years, the CBO predicts federal debt in the hands of the public will absorb 80 percent of GDP. And that doesn’t include the real cost of state-run health care. Other than the temporary financial conditions surrounding WWII, we’ve never seen anything like this.

The president’s grandiose government-takeover-and-control strategies are going to make things worse and worse -- that is, unless members of that tiny band known as the Republican party can stand on their hind legs and just say no. The Republicans must come up with some pro-competition, private-enterprise alternatives for health, energy, education, taxes, and trade that will meet the yearning of voter-taxpayers for a return to private-enterprise American prosperity and opportunity.

Free-market competition will lower costs in health care just as it has every place else. It also will grow the economy. The GOP must return to this basic conservative principle and reject Obama’s massive government assault.