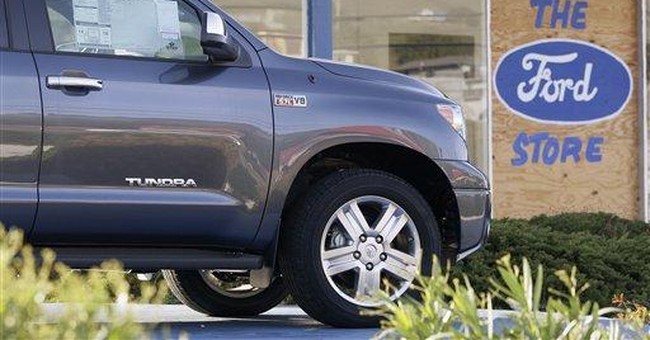 The bailout-nation saga continued this week as the little-three carmakers from Detroit drove to Washington to plead for a $34 billion federal package to save themselves from bankruptcy and insolvency. Hot on their heels was a devastating report of 533,000 lost jobs in November. Actually, it’s a loss of 732,000 jobs, including downward revisions from the prior two months. Unemployment moved up to 6.7 percent from 6.5 percent, a number that’s going to get worse as the volume of discouraged workers continues to rise.

So here’s the painful choice for both Republicans and Democrats in Congress: Will the political class risk a Detroit-carmaker bankruptcy that might lead to catastrophic liquidation -- including, realistically, a couple million car-related jobs -- all while the recession deepens and job losses mount (1.2 million in just the past three months)?

It’s a tough choice -- especially for Republicans, most of whom want to vote against bailout nation and stop big-government encroachment on our free-market economy. That’s the right theory. But are the economic risks simply too great to employ it?

Various polling surveys say bailout nation, and a federal rescue for autos in particular, is very unpopular. At least 60 percent are polling against a bailout. The TARP bailout of banks is increasingly unpopular.

Meanwhile, the pressure for more bailouts grows daily. The Avis rental-car company wants a bailout from TARP. A company called BlueFire Ethanol wants a bailout. The trade association for equipment-leasing companies wants a bailout. There’s no end to it. And if we keep going down this path we’ll make a mockery of free-market capitalism.

Where to draw the line? That’s the huge political question.

Coming back to Detroit, there may be a pragmatic solution, one that takes some of the apocalypse-now threat of major economic decline out of play. Senator Bob Corker and others have proposed a federal oversight board that would in effect become a bankruptcy court. Strict conditions would be imposed on the carmakers, especially regarding compensation -- the single-biggest reason for Detroit’s decades-long decline.

Corker wants Detroit to have the exact same compensation levels as the Japanese transplants in the non-union Southern states. That means moving hourly labor costs down from roughly $70 to $48. It means reopening the UAW contracts that have created the huge pay-gap between Toyota and GM. It means putting an end to excessive pension and healthcare benefits.

According to Professor Mark Perry of the University of Michigan, GM healthcare benefits add $1,500 to the price of every vehicle, while pension costs add another $700 per car. That will have to end. The lucrative jobs bank that pays laid-off workers 95 percent of their compensation also will have to stop. And bondholders will have to be satisfied with a complete renegotiation of GM’s $62 billion in debt, including the union retiree healthcare fund that is under-funded by $30 billion.

There still will be considerable job losses for downsized Detroit carmakers. They’ll have to cut a huge chunk of their dealer networks. Domestic brands will have to be sharply reduced. But essentially, as would be the case under Chapter 11 bankruptcy, the federal government will provide short-term financing while Detroit goes through its radical restructuring. It looks like bankruptcy lite, and it will completely change the direction of the former Big Three.

It’s probably too much to ask, but tough federal action under the aegis of oversight-board enforcement also should relieve the CAFE fuel standards that have plagued U.S. automakers. At the very least, worldwide standards should be substituted for domestic ones. Making expensive small green cars is an unprofitable business.

Ironically, with oil and retail gasoline prices plunging, it’s not unreasonable to expect something of an auto-sales recovery. Gas prices have dropped all the way to $1.75 from over $4. This tax cut will help revive the whole economy, along with auto sales.

But if Washington can put this car-bailout business behind it, perhaps Congress can move on to the ultimate solution: restoring economic growth.

President-elect Obama has been cagey about the details of his massive $700 billion infrastructure spending plan and whether he’ll raise taxes on successful earners. But this new New Deal, including Obama’s middle-class tax credits, will not create permanent economic growth incentives.

What will? A genuine supply-side growth agenda to reduce tax rates across-the-board.

If the Republican party wants to put bailout nation to rest it should campaign for lower corporate, individual, and investment tax rates. It should make clear that the Democrats are the government-spending party while the Republicans are the tax-cutting party.