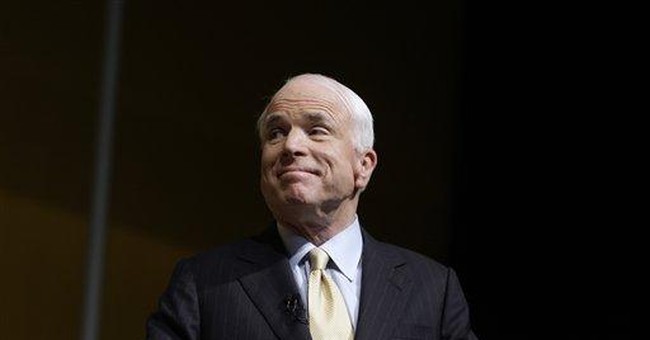 There will be no more business as usual for housing lenders Fannie Mae and Freddie Mac if John McCain is elected president. That’s McCain’s clear message in a recent hard-hitting op-ed in the St. Petersburg Times and in various straight-talk media interviews.

Politically powerful Fannie and Freddie may be popping champagne corks in Washington, where a congressional bailout package provides full government backing for their outsized management pay packages, massive political-contribution and lobbying practices, and private portfolio hedge-fund activities. These government-sponsored enterprises (GSEs) got just what they wanted, and they now have the power to pay more dividends to their shareholders without any caps on compensation.

But Big Mac is gonna put an end to this if he’s elected come November.

“Americans should be outraged at the latest sweetheart deal in Washington,” writes McCain. “Congress will put U.S. taxpayers on the hook for potentially hundreds of billions of dollars to bail out Fannie Mae and Freddie Mac. It’s a tribute to what these two institutions -- which most Americans have never heard of -- have bought with more than $170-million worth of lobbyists in the past decade.”

Fannie and Freddie represent the worst of Washington’s bailout fever. Using government power for private profit is how Wall Street Journal editor Paul Gigot puts it. Privatizing gains while socializing losses is the complaint registered by former House majority leader Dick Armey. Government semi-socialism is how I see it.

The GSEs spread political vigorish in turn for more power and more privilege. Just this year alone their portfolio caps were raised twice while their capital reserve requirements were lowered. And now, with an explicit government guarantee, unlimited credit lines, and the possibility of federal stock purchases, they’ll be GSEs on steroids. All this in the name of helping housing, the most favored political sector in the American economy.

Budget assistance for homebuyers is already staggering. The Housing and Urban Development department spends $52 billion a year. The home mortgage interest deduction is worth about $80 billion yearly. A capital-gains exclusion is estimated at $29 billion. And the local property-tax deduction comes to roughly $14 billion. That’s a total of $175 billion in annual assistance to the housing sector. And that’s before we get to the Fannie-Freddie bailout.

Some people talk about a so-called Marshall Plan to spur American energy independence. But for years we’ve had a Marshall Plan for housing. It’s enough already. There are other economic sectors worthy of investment.

John McCain has taken a strong reform position here, and he’s totally right. This is McCain at his very best. He argues that Fannie and Freddie employees manipulated financial reports to line the pockets of senior executives. He calls the GSEs a danger to financial markets. And he says if one dime of taxpayer money ends up in those institutions “the management and the board should immediately be replaced, multimillion dollar salaries should be cut, and bonuses and other compensation should be eliminated. They should cease all lobbying activities and drop all payments to outside lobbyists.”

He also argues for strong regulation of Fan and Fred “that limits their ability to borrow, shrinks their size until they are no longer a threat to our economy, and privatizes and eliminates their links to the government.”

McCain economic advisor Steve Forbes wants to breakup Fannie and Freddie into 10 or 12 companies, completely severing their ties to the government. With these private companies competing in the mortgage market, Forbes says the entire housing sector will be revived, with taxpayers off the hook for a change.

On the other hand, Treasury Secretary Henry Paulson is putting his reform hopes on new Fannie-Freddie regulator James Lockhart, who runs the Office of Federal Housing Enterprise Oversight. Lockhart is a reformist skeptic of Fannie and Freddie. But his term would only last until year-end. After that, his successor will be subject to Senate confirmation and a public grilling from the two banking committees, all while Fan and Fred pour money into the campaign coffers of the Democrats and Republicans serving on those committees.

Does this sound like true reform? Highly doubtful. In fact, the bailout bill should be completely rewritten to stipulate the kind of privatization program outlined by Sen. McCain.

Former Reagan Treasury official Peter Wallison has warned for years that Fannie and Freddie would blow up financial markets. Well, we just witnessed the blow-up. But now we should also blow up the Fannie-Freddie bailout. It’s not real reform.

Obama won’t do it. He says there must be an essential role for Fan and Fred. And Obama advisor Franklin Raines -- the former Fannie Mae CEO who was forced to resign over accounting scandals -- argues for the status quo. But McCain is talking real reform. Bravo for the Arizonan. He’s the real candidate of change.