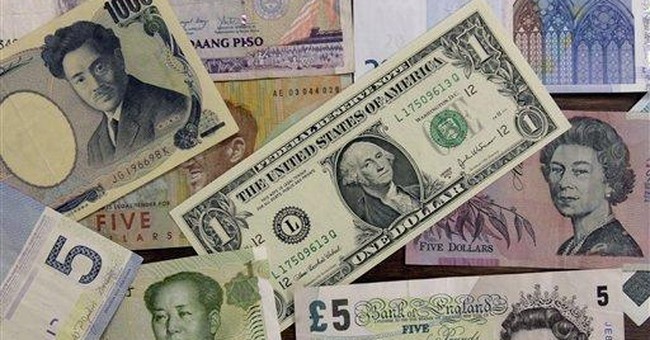 If Sen. John McCain wants to run as a candidate of change, and if he’s interested in distancing himself from President Bush on some issues, he should reverse the declining fortunes of the Bush wartime dollar. America’s prestige is on the line.

With inflation spurting in the U.S., the sinking dollar is being ridiculed both at home and overseas. The falling dollar is perceived as a sign of American decline -- which is a very bad sign.

Main Street voters hate soaring food and gasoline prices. Suburban voters who take vacations are very angry. Gold at $1,000 an ounce?! Oil at $100 a barrel?! What’s going on here? Is this America?

The people in charge of the dollar at the Treasury and the Federal Reserve are guilty of dollar neglect. They’re also Republican appointees, and the GOP will take the blame in November. The Treasury says a strong dollar is in the nation’s interest? Huh? The Fed says it’s targeting price stability? Huh?

Right now the greenback is in virtual freefall. It’s a disorderly drop that’s picking up speed. In the last month the dollar has fallen 5 percent. Over the past two years it has declined 30 percent against the euro. In the past six months it has dropped nearly 20 percent versus the yen. Measured in terms of a basket of industrial currencies, the dollar is now below its 1970’s level.

Consequently, for the first time in a decade I’ve become genuinely worried about inflation. Over the last year and a half, consumer prices have climbed from 1.5 percent to nearly 4.5 percent. Prices are rising today faster than average hourly earnings for the non-management workforce. As real incomes go down, so goes the consumer.

The worldwide commodity boom in oil, metals, and food is largely a function of the global spread of free-market capitalism and unprecedented international economic growth -- especially among emerging-market economies in China, India, Brazil, Russia, and Eastern Europe. Yet because the U.S. has neglected its currency, allowing it to drop lower and lower, good news on global growth is translating into bad news on U.S. inflation.

Inflation is the single biggest cause of recession, and it may well be tipping the U.S. economy into negative territory. It’s also the cruelest tax of all. Inflation robs consumer and wage-earner purchasing power. It erodes business profits. It reduces the real worth of investor portfolios.

Think of this: The capital gains tax is not indexed for inflation. So the effective tax rate on real capital gains has jumped from 22 percent to 37 percent since September. This inflation-tax penalty has emerged despite the fact that no new tax legislation has been passed in Washington. It also has occurred exactly while the stock market has fallen about 15 percent. Coincidence? I think not.

Something must be done to reverse this, and John McCain is the man to do it. Remember, McCain was a foot soldier in the Reagan revolution. Borrowing a page from the Gipper -- who always said a great nation has a strong currency -- he should argue on the campaign trail for a dollar surge. He should insist that a President McCain will order the Treasury Department to initiate open-market actions to boost the greenback. He should say his Treasury will conduct dollar-strengthening diplomacy with Europe, Britain, Canada, and Japan. He should state that a President McCain will appoint a Federal Reserve chief who will stop ignoring the dollar and inflation, as Fed Head Ben Bernanke did last week before Congress.

Strengthening the dollar isn’t only good financial policy, it’s an act of patriotism. A patriotic dollar will show our jihadist enemies and the rest of the world that there will be no declinist America.

Indeed, the dollar is still the world’s reserve currency, with the vast majority of financial transactions running through the dollar. By reminding voters of this fact -- by placing the U.S. dollar front-and-center in his campaign and emphasizing that there will be no falloff in dollar responsibility if he’s elected -- McCain can more than bolster his agent-of-change credentials and his standing as an economic reformer.