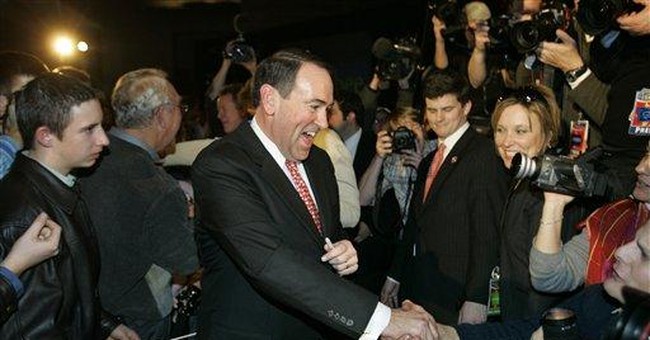 Yes, corporate profits are slowing and jobs are softening. Despite 52 months of ongoing jobs gains and 1.3 million new payrolls in the past year, December jobs registered only 18,000 and the unemployment rate ticked back up to (a still historically low) 5 percent. Despite years of gains from a booming business sector, corporate profits are in fact falling at about a 6 percent clip.

But the last thing we need now is root-canal economic populism from the campaign trail and the mainstream media telling us that Americans are unhappy. Unhappy? According to a Gallup Poll released last week, “Most Americans say they are generally happy, with a slim majority saying they are ‘very happy.’” They’re also prosperous. According to Investor’s Business Daily, household wealth in the U.S. soared 51 percent to $58.6 trillion in last year’s third quarter from $38.8 trillion in 2002.

Meanwhile, the Goldilocks economy remains alive and well. It’s still the greatest story never told. And while Goldilocks may have softened somewhat, getting her back on track is not rocket science.

The key thing to remember is that businesses drive the economy. Businesses create jobs and incomes for consumers to spend. Today’s John Edwards/Mike Huckabee anti-business populism sounds more like William Jennings Bryan than Adam Smith. It’s absolutely crazy. They attack Wall Street and investors, which is another way of attacking capital. Without capital investment, there will be no new business, no new jobs, and no middle class.

And the reality is that today’s economic weakness is coming from the business side, not the sub-prime/housing/consumer side. We’re witnessing high energy and raw-material prices cause unit costs for businesses to rise faster than prices. That spells weakening profits.

As for this notion that consumers are tapped out, take a look at disposable income. After inflation, it’s rising better than 2 percent. Strong income gains of 3.7 percent for hourly earnings are running 1 percentage point ahead of inflation measures based on personal consumption. As it happens, car sales were strong this week. They’re running 3.6 percent at an annual rate, ahead of the third quarter. Even holiday sales have surprised on the upside.

All of this is why the Fed needs to deliver a 50 basis point rate cut at its January 30 meeting. A big-bang rate cut would help businesses, consumers, and mortgage owners. It would make the cost of money cheaper and expand the overall liquidity base of the economy.

Some folks argue that rising inflationary pressures would offset these benefits. But that’s nonsense. Inflation is the most overrated issue out there. Even when you factor in energy, headline inflation for 2007 is going to come in below the prior year while inflation for 2008 should be even lower than that.

Back in 2000-01, when the economy was slowing markedly, the Fed obsessed about inflation. They were wrong, and then took a radical u-turn. It can’t be the same story again. The money supply hasn’t grown in a few years while inflation is poised to go way down. The Fed must act, and act big. After that, elected Washington can do the rest.

Right now the single best thing President Bush and Congress can do is slash the corporate tax rate for large and small businesses. Bush must reach out to Charlie Rangel and move the corporate tax to 25 percent from 35 percent. Then, instead of taxing successful capitalists as an offset, Congress can entirely abolish corporate-tax subsidy loopholes, special provisions, and other corruption-inducing K-Street earmarks.

A middle-class tax cut to help families and small businesses would also work wonders. This can be done by collapsing the three middle-income tax brackets of 15 percent ($15,650), 25 percent ($63,700), and 28 percent ($128,500) into one 15 percent bracket. These brackets apply to small-business owners who may be suffering the high costs of energy and raw materials. The biggest weakness in the jobs report is the household survey which is comprised of these owner-operated small businesses. Household job increases have slumped to only 262,000 over the last year.

A major cut in the corporate tax and a simplification of the middle-income tax brackets makes good economic sense. It would help the current softening of the economy and increase America’s long-run potential to grow. This is a good plan for President Bush as well as the GOP candidates on the campaign trail. It sure as hell beats talking the economy down.

America is an optimistic country, and for the life of me I don’t know why the Republican presidential candidates can’t understand this. If a few things go wrong we can fix them. That’s what the Fed is there for and that’s what tax policy is there for.

Just because Goldilocks is alive and well, it doesn’t mean she can’t use a bit of help.