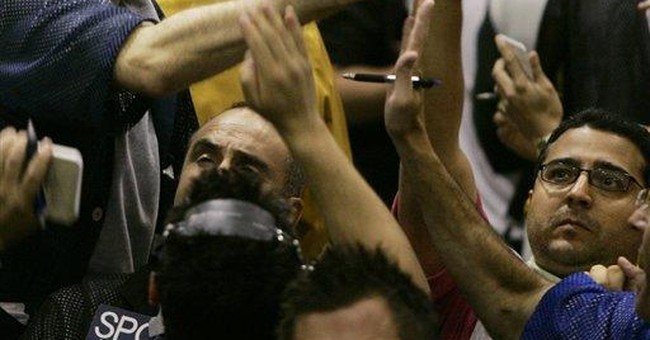 Stock market bulls like myself were on the losing side of this week's trading, as the Dow gave back roughly 4 percent from its 14,000 peak. The big story was a wave of high-anxiety credit fears over the value of corporate and housing loans. Credit circuits blew a fuse, lending markets temporarily froze, and a number of buyout deals were postponed as analysts and traders worked through their problems.

But this is no time to lose faith. The economy has found its legs with a 3.4 percent GDP growth report for the second quarter, a much-needed surge from only 0.6 percent in Q1. Moreover, core inflation came in at a rock bottom 1.4 percent.

Most importantly, second quarter corporate profits are flowing in two to three times better than expected. Much of this reflects the huge global economic boom that Treasury Secretary Henry Paulson describes as the greatest worldwide surge in his professional lifetime. These rising profits inject new value into the stock market.

Be it loan worries or the stock correction, the key point in all this is the steady stream of rising profits. Profits matter. They are the best guarantee for the credit worthiness of corporate loans and the value of stocks.

As classical economist Benjamin Anderson wrote in the 1920s when he was the top economist at the old Chase National Bank, "Profits are the heart of the business situation." Down through the years, I've paraphrased that as profits are the mother's milk of stocks and the economy. It's time to add creditworthiness to that list.

What we're witnessing is not a true credit crunch, but a temporary credit freezing-up. Banks have a lot of loans from financing buyout deals, and right now the credit freeze has stopped them from selling these loans to institutional customers. Loan markets have been over-leveraged by private equity funds that during the past year or so have completed deals with too little cash equity and too much loan leverage.

Bond vigilantes are disciplining the buyout mavens and forcing a credit risk re-pricing that will incentivize cash equity and discourage debt over leveraging. It's a healthy market-driven correction. The key point is that robust business profitability makes these over-leveraged bank loans good paper, not bad. In due course, the dust will clear and credit markets will resume functioning. Bankers will divide up these loans and resell them in tranches at handsome interest rates to pension funds, insurance companies and money managers around the world.

Congressional Democrats could enhance this healing process if they would quit threatening to raise taxes on buyout firms and hedge funds whose ears are being pinned back by the bond market. This is no time to raise capital costs by repealing Bush's tax cuts or by raising new taxes. Case in point: Former Sen. John Edwards's bad idea to raise the capital gains tax rate to 28 percent from 15 percent, and to drive up the top personal tax rate to at least 40 percent from its current 35 percent.

Treasury man Paulson was right when he told me in a recent CNBC "Kudlow & Company" interview that if you tax something more, you get less of it. That's why he opposes the hedge and buyout fund tax hike. Millions of pensioners, including firefighters, police and teachers, will suffer lower retirement returns if Democrats have their way. Taxing capital more will throw a wet blanket over American families' income and spending power by weakening the jobs picture, which remains one of the brightest spots in our economy.

Paulson has a better idea. He recognizes that our corporate tax system is broken. Business tax reduction is occurring all over the globe. Hence, the United States is becoming less competitive in the global race for capital. Paulson believes the best solution to this is full-fledged, pro-growth corporate tax reform.

His Treasury staff is apparently preparing a plan to reduce the current 35 percent federal tax on business down to 27 percent. It's a very good idea. Paulson also favors Loews CEO James Tisch's idea to reduce the corporate capital gains tax rate. Measures like this would improve business profitability, make the United States more hospitable to global investment, spur new businesses and job creation, and enhance the creditworthiness of all that loan paper gathering dust on bankers' shelves.

The loan credit freeze-up currently plaguing corporate stock and bond markets would improve rapidly if Washington would befriend the markets, instead of waging war against them.