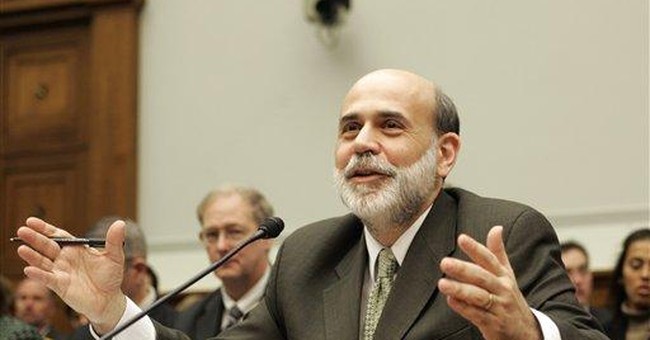 The stock market loved it, up 100 points. Stocks soared in all sectors and around the world.

Strong business, rising exports to the rest of the world, healthy consumers, low unemployment, wages on their best run in years -- these were Bernanke's key bullet points.

Senate Democrats like Christopher Dodd and Chuck Schumer kept harping about income inequality and wage stagnation, trying to change the subject from the excellent economic news and pave the way for a tax hike on the top, most successful American earners. But wages are booming. And the rest of the inequality story is so much statistical illusion and faux arithmetic. (Just ask Washington economics scholar Alan Reynolds).

None of the senators succeeded in ruffling Bernanke's feathers. He waved them off. Besides, Ben believes that better education, not higher taxes, is the key to unleashing worker competitiveness and success in the globalized economy.

Interesting guy, this Ben Bernanke -- one of only a couple of non-socialist members of Princeton's economic faculty. He's a seasoned government policymaker, serving as a former top White House economic advisor following his three-year stint on the Federal Reserve Board. He is an academic, with the air of a Talmudic scholar. With his slightly hunched-over posture and closely clipped, well-kept beard, he even looks like a Talmudic scholar.

Since taking the chief Fed job last February, Bernanke has stopped the inflationary fevers and laid the groundwork for what is virtually a runaway bull market in stocks.

Averages across-the-board are now moving toward all-time highs: Dow, transports, utilities, the small cap Russell 2000, the NYSE index and D-J Wilshire 5000. Inside the indexes, the story is the same: commodities, cyclicals, defense, machinery and construction all hitting all-time highs. The depth, breadth and resiliency of this rally is remarkable.

America's bull market economy stands at the epicenter of the newly capitalist world market economy. Therefore, it is no surprise that America's stock rise is being emulated around the world. This is called economic leadership.

The reality is that non-inflationary growth and rising living standards are occurring all around the globe. For this, thank the spread of American-style, free-market capitalism. Some call it cowboy capitalism, but I prefer to think of it as prosperity capitalism.

Record wealth is now being created among a hundred million-plus investors in the United States, including union and public employee pension fund holders who are 60 percent invested in the Bernanke bull market. This, even though they rail against stock market wealth and business in general, and still don't get it that their retirement wealth bread is being buttered by the fabulous expansion of the portfolio value of the ownership society.

Stocks are the best barometer of future business and economic health. They are signaling that the wealth of the nation currently and prospectively looks excellent.

Democrats rule the roost on Capitol Hill, but Bernanke stuck to his free market principles. He is targeting inflation and employment, and so far doing a good job with both.

Does anybody remember that President George W. Bush appointed Bernanke? And that Bush's record-low tax rates on capital have promoted strong economic growth? And that this tax-driven growth and investment surge brings inflation down by absorbing the excess money created by Alan Greenspan between 2003 and 2005? The availability of more goods and services makes the existing money supply less inflationary.

In his brief tenure, Bernanke has mopped up this excess liquidity and reduced inflation expectations. Meanwhile, low tax rates are counter-inflationary. So, a combination of strong economic growth and newfound monetary control are working together for the betterment of investors, workers, businesses and federal finances. The supply-side model is very much in place right now.

Demand-side Wall Street bears fail to understand this, but Bush and his Fed appointee, Ben Bernanke, have pulled a fast one. They have restored the Ronald Reagan approach to non-inflationary growth economics: tight money and low tax rates.

We are witnessing the Bush/Bernanke boom. It is still the greatest story never told.