Why Stop at Reassessing Confederate Monuments? What About the Kennedy Brothers?

Larry Elder
|
Posted: Aug 24, 2017 12:01 AM
Share   Tweet
The opinions expressed by columnists are their own and do not necessarily represent the views of Townhall.com. 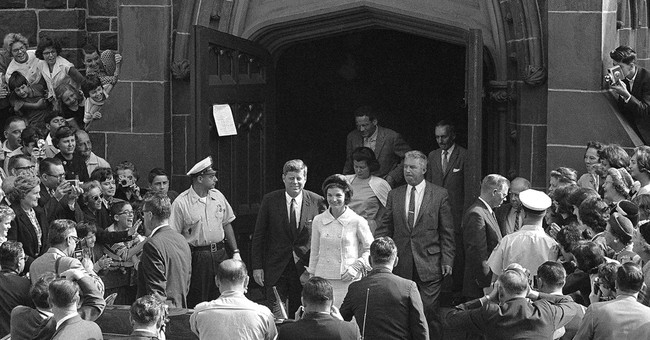 As we rewrite history and remove Confederate monuments deemed "offensive" when viewed through the prism of contemporary standards of morality, reasonable people ask: Where does one draw the line? The left, for example, reveres the Kennedy brothers, John, Robert and Edward. But if evaluated by today's standards of social justice, would these left-wing icons hold up?

In Sen. Ted Kennedy's case, how does the monument-removing left feel about the kiss Kennedy blew Gov. George Wallace a mere 10 years after Wallace delivered what became perhaps that era's most infamous defense of segregation? At Wallace's request, Kennedy spoke in Alabama at a 1973 Fourth of July "Spirit of America" rally honoring Wallace in 1973.

Just 10 years earlier, Wallace defended "Jim Crow," or legal segregation, by shouting, "Segregation now, segregation tomorrow, segregation forever," and attempted to prevent blacks from attending the University of Alabama by blocking a campus doorway. Yet at this July 1973 rally, where Wallace received a "Patriotism Award," guest speaker Kennedy praised Wallace as a believer in the "true spirit of America," who supported the right of everyone to "speak his mind and be heard." Kennedy also talked about the things the two men had in common, including that they "don't corrupt," "don't malign" and "don't abuse" the people's trust.

John F. Kennedy won a razor-thin race in 1960. The black vote was crucial. Just four years earlier, nearly 40 percent of blacks voted Republican. Kennedy got 68 percent of the black vote, thanks in part to the tireless efforts of entertainer Sammy Davis Jr. The brilliant singer/actor/dancer/musician/comedian Davis campaigned hard for Kennedy, and even postponed his wedding to a white actress until after the election to avoid costing votes from those who disapproved of interracial marriages. But after Kennedy got elected, and Davis then got married, the President-elect disinvited him from performing at Kennedy's inaugural gala. It got worse. Twentieth Century Fox, to which Sammy's new wife was under contract, invoked the morals clause and let her go, effectively ending her career.

The NAACP criticized Ted Kennedy's appearance at the Wallace rally, and during Jack Kennedy's presidency civil rights groups grew frustrated over Kennedy's failure to offer a civil rights bill. But JFK, afraid of alienating the South, wanted to delay any legislation until after the 1964 re-election.

Some historians argue that Kennedy agreed to the wiretap because he feared Hoover possessed scandalous files on the Kennedy brothers. But other historians say Robert Kennedy sincerely believed, as Hoover did, that communists infiltrated King's civil rights team.

"I asked the FBI to make an intensive investigation of Martin Luther King," Robert Kennedy later told journalist Anthony Lewis. "We never wanted to get close to him just because of these contacts and connections that he had, which we felt were damaging to the civil rights movement and because we were so intimately involved in the struggle for civil rights, it also damaged us."

Never mind that FBI documents later released do, indeed, show that a close King adviser also served as a high-level operative and financier of the Communist Party USA. Tell this to today's social justice warriors in Philadelphia where, for example, locals debate whether to move a statue of a mayor whom some black Philadelphians call racist. Whatever Mayor Frank Rizzo was and did, he didn't own slaves.

Is removing Confederate statues a priority issue among blacks, the group presumably most offended by the monuments? Not really. A new NPR/PBS NewsHour/Marist poll shows that more blacks want the monuments to stay than want them removed -- 44 percent to 40 percent, respectively. Add in the 16 percent who are "unsure" and a majority of blacks either want the statues to stay or don't seem to care much one way or the other. Also, if Confederate statues inflict such misery on the psyche of blacks, why do tests repeatedly show that blacks have higher self-esteem than whites?

Charles Barkley, the ex-basketball star turned television analyst, said he's "always ignored" Confederate statues. He said: "I'm 54 years old. I've never thought about those statues a day in my life. I think if you ask most black people, to be honest, they ain't thought a day in their life about those stupid statues. ... What we as black people need to do ... we need to worry about getting our education. We need to stop killing each other. We need to try to find a way to have more economic opportunity. Those things are important and significant."

Barkley makes more sense than many of our so-called leaders. Why don't we first tackle issues like the breakdown of the nuclear family, noncompetitive urban public schools and gang-related violence before we move on to Confederate monuments?