Pelosi: I Never Met 'Anybody Who Liked His or Her Plan' 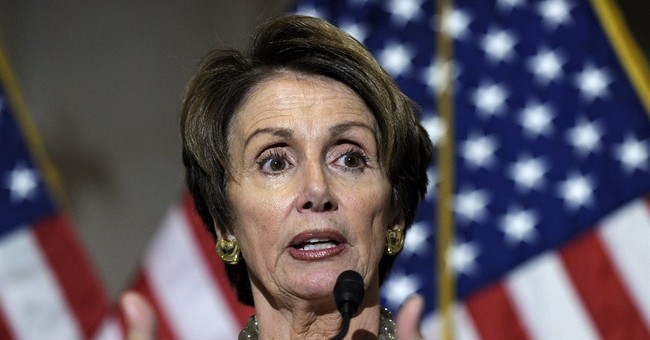 Asked whether she needed to apologize to the formerly insured who have lost their health insurance plans, former House Speaker Rep. Nancy Pelosi, D-Calif., said, "Did I ever tell my constituents that if they liked their plan they could keep it? I would have if I'd ever met anybody who liked his or her plan. But that was not my experience."

Pelosi, whose net worth -- combined with her husband's -- is estimated between $35 and $180 million, never "met anybody who liked his or her plan"? Her out-of-touch comment reminds one of then-New Yorker film critic, liberal Pauline Kael. In 1972, after Republican Richard Nixon crushed Democrat George McGovern, 49 states to one, a shell-shocked Kael said, "Nobody I know voted for Nixon."

Pelosi's world is that of rich people and government workers whose health care plans are better than those of their counterparts in the private sector. How would she know that, according to a pre-Obamacare ABC News-Kaiser Family Foundation-USA Today survey, "88 percent of the insured rate their coverage as excellent or good" and "89 percent are satisfied with the quality of care they receive"?

Ms. Pelosi, meet Kristen Powers, Fox News analyst and a Democratic strategist. After her policy was canceled and her premiums doubled, Powers said: "My blood pressure goes up every time they say that they're protecting us from substandard health insurance plans, because there is nothing to support what they're saying. ... I am losing my health insurance. ... If I want to keep the same health insurance, it's going to cost twice as much. There's nothing substandard about my plan.

Are health insurance companies any greedier than any other for-profit sector of the economy? In 2009, before Obamacare, profit margins for the network and communications equipment industry averaged 20.4 percent; Internet services and retailing was 19.4 percent; pharmaceuticals averaged 19.3 percent; railroads 12.6 percent; gas and electric utilities 8.7 percent; and food consumer products 6.7 percent. Health insurance and managed care companies? They averaged 2.2 percent.

Of the political contributions by the, say, communications/electronic industry in 2012, $94.6 million went to Democrats, and $55.7 million to Republicans. But from 1990 to the current 2014 cycle, according to OpenSecrets.org, insurance companies gave 63 percent of their political donations to Republicans versus 37 percent to Democrats.

Obamacare is now more unpopular than ever, in large part because of broken promises. At the televised health care summit in February 2010, just before passage of Obamacare, then-Minority Whip Eric Cantor predicted millions would lose their coverage. He had the following exchange with the President:

Obama: "The 8 to 9 million people that you refer to, that might have to change their coverage ... would find the deal in the exchange better." Yet Obama still publicly assured people that "no one" would take away their policy, if they liked it.

Finally, Obama still gets a pass on a tale he repeatedly told to sell Obamacare. How many times did we hear that Obama's mom, dying of cancer, had to fight with her carriers to pay her medical and hospital bills? The story, crucial to humanizing the fight, turns out to be bogus. According to a book by an ex-New York Times reporter, the sole dispute was between Obama's mother and an insurance company over a disability policy his mother had taken out. The insurance company said she'd had a pre-existing condition when she applied for that policy. But her medical bills -- and this is what Obama insisted they fought over -- were in fact paid by her health care insurer, directly and without dispute.

Yes, our health care system "suffers." But it suffers from a lack of free markets. The antidote is more competition -- reducing barriers to entry, health savings accounts, giving individuals the same health care tax breaks as given to business, competition across state lines, and for tough cases, charity.