Where Do Public School Teachers Send Own Kids? 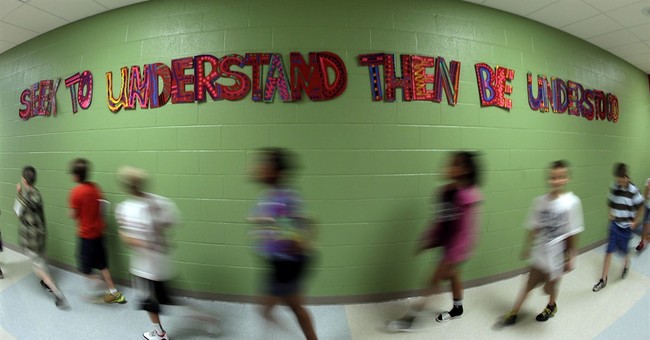 Guy walks into a restaurant. Says to the waitress, "I'd like some scrambled eggs and some kind words." She brings the eggs. The guy smiles, "Now how about the kind words?" Waitress whispers, "Don't eat the eggs."

The study, conducted in 2004 by the Fordham Institute, said: "These findings ... are apt to be embarrassing for teacher unions, considering those organizations' political animus toward assisting families to select among schools. But these results do not surprise most practicing teachers to whom we speak. ... The data have shown the same basic pattern since we first happened upon them two decades ago: Urban public school teachers are more apt to send their own children to private schools than is the general public. One might say this shows how conservative teachers are. They continue doing what they've always done. Or it might indicate that they have long been discerning connoisseurs of education. ...

"The middle class will tolerate a lot -- disorder, decay, and dismay, an unwholesome environment, petty crime, potholes, chicanery and rudeness. One thing, however, that middle class parents will not tolerate is bad schools for their children. To escape them, they will pay out-of-pocket or vote with their feet. That is what discerning teachers do."

What about members of Congress? Where do they send their own children?

The ex-mayor of Los Angeles, Antonio Villaraigosa, was asked why he did not have his own kids in public school despite his strong advocacy of public education. Villaraigosa, whose wife was a public school teacher, said, "I'm doing like every parent does. I'm going to put my kids in the best school I can. My kids were in a neighborhood public school until just this year. We've decided to put them in a Catholic school. We've done that because we want our kids to have the best education they can. If I can get that education in a public school, I'll do it, but I won't (SET ITAL)sacrifice(END ITAL) (emphasis added) my children any more than I could ask you to do the same."

When he got elected president, Barack Obama and his wife made a big display of looking into D.C. public schools for his two daughters to attend. But the Obamas chose Sidwell Friends, the elite private school whose alums include Chelsea Clinton. Obama's own mother sent the then-10-year-old to live with her parents -- so he could attend Punahou Academy, the most exclusive prep school on the island. In fact, from Punahou to Occidental (a private college in Los Angeles) to Columbia (where he completed college) to Harvard Law, Obama is a product of private education.

So how does this square with Obama's opposition to the D.C. Opportunity Scholarship Program that offered a voucher for the children of participating parents? It doesn't.

Here's what Obama's Office of Management and Budget said about the program: "Rigorous evaluation over several years demonstrates that the D.C. program has not yielded improved student achievement by its scholarship recipients compared to other students in D.C."

Tell that to the educator/consultant the Department of Education hired to evaluate the program. Testifying before the Senate Committee on Homeland Security, Patrick Wolf, a University of Arkansas education policy professor who spent more than 10 years evaluating school choice programs in D.C., Milwaukee, New York and Dayton, Ohio, said, "In my opinion, by ... boosting high school graduation rates and generating a wealth of evidence suggesting that students also benefited in reading achievement, the D.C. OSP has accomplished what few educational interventions can claim: It markedly improved important education outcomes for low-income inner-city students."

President Barack Obama calls education "the civil rights issue of our time." Yet, his opposition to K-12 education vouchers guarantees that many of America's kids will sit in back of the bus.