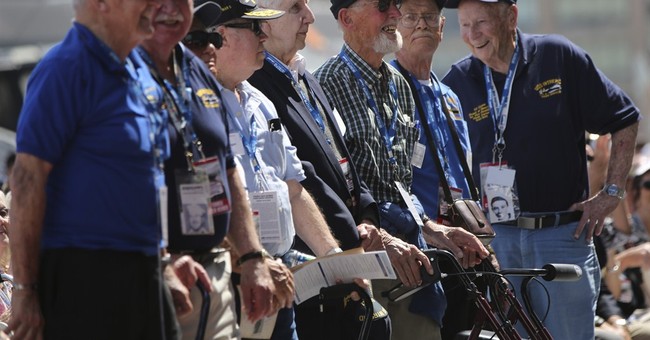 Trending
Given the choice between having a Marine Corps of 5,000 whites and 500,000 blacks, then-Marine Corps Commandant Lt. Gen. Thomas Holcomb said he would much rather have the whites.

That was over 70 years ago. America has travelled quite some distance from the time of that racist statement to the election and re-election of a black President.

Friday, Aug. 16, 2013, was not just another picture-perfect sunny California day. It was the proudest day of my life and in the life of my family. My father, Randolph Elder, posthumously received the highest civilian award Congress can grant, the Congressional Gold Medal.

My dad, after the attack at Pearl Harbor, like millions of Americans, joined the military. He chose the Marines. Why the Marines? "I liked the uniforms," Dad said. "And they go where the action is."

In 1941 President Roosevelt signed an executive order demanding fair employment in the Armed Services. In the then-all-white Marine Corps, many officers resisted. Holcomb said, "There would be a definite loss of efficiency in the Marine Corps if we have to take Negroes."

But black enlistment began a year later, and two black battalions were formed. These first black Marines trained at a segregated base in Montford Point, N.C. From 1942 to 1949, 20,000 blacks went through that boot camp.

My dad, during his three years from 1943 to 1946, served as a cook in Guam. Promoted four times and an excellent marksman, Dad achieved the rank of staff sergeant. Montford Pointers also served in Saipan, Tinian, Peleliu, Iwo Jima, Okinawa, Japan and China.

Montford Pointers faced even more discrimination off base than on base. When off base, they had difficulty getting back on time. Buses were segregated, and a black Marine never knew whether there would be space in the rear. Many uniformed Montford Pointers were arrested for impersonation. No one had ever heard of, let alone seen, a black Marine.

The Montford Pointers served with great distinction, sometimes facing fire while working manual jobs like cooks, transporters, ammunition carriers, stewards, stevedores and in other support capacities. Lt. Gen. Alexander A. Vandegrift, who succeeded Holcomb as the Corps' commandant, said: "The Negro Marines are no longer on trial. They are Marines, period."

On this day at Camp Pendleton, nearly 200 Marines in dress blues stood during the entire one-hour ceremony. In the dedication for Staff Sgt. Randolph Elder, Col. Bohm spoke about the prejudice and abuse the Marines endured. Noting that my dad was a cook, he said, "There are two things a Marine will never let you mess with -- his pay and his chow."

After the ceremony, young Marines came up to my brother and me, thanking Dad for being a Montford Point "pioneer." As a standard part of orientation, the Marine Corps now includes the history of the Montford Point Marines.

Rep. Dana Rohrabacher, R-Calif., spoke movingly at the ceremony about his Marine dad, who also served in World War II. He presented my family with a flag he had arranged to be flown at the top of the Capitol Building in my dad's name. I also want to thank Kathleen Staunton, the congressman's district director, who worked tirelessly for nearly a year to put this ceremony together.

The Congressional Gold Medal came with a proclamation issued by the Montford Point Marine Association. It reads, in part:

"In a unanimous and bipartisan vote by the members of the One Hundred and Twelfth Congress of the United States, the Congressional Gold Medal has been awarded for his pioneering spirit as one of the very first African American Marine recruits to enlist and attend boot camp training at Camp Montford Point, North Carolina, during World War II. His dedicated contribution has paved the way for outstanding perseverance and courage on and off the battlefield that inspired social change in the United States Marine Corps. ... His devotion to duty reflected great credit upon himself and was in keeping with the highest traditions of the Marine Corps and the United States Naval Service."

My latest book, "Dear Father, Dear Son," is about my dad. He was a gruff, tough, humble man. He would have been awed by this ceremony. He would have wondered about "all this fuss over my little life," an expression he used whenever he was complimented on his service to our country. He would have asked me why the ceremony required me to take the whole day off from work -- something he never did as the operator of Elder's Snack Bar, a small restaurant Dad started after years working as a janitor.