When Will They See That This Is One Bad Recovery? 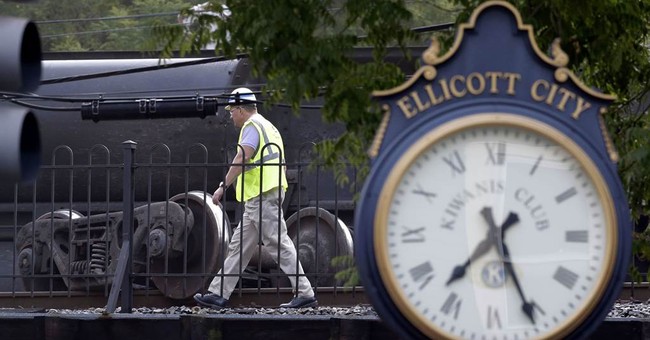 First-quarter gross domestic product numbers for 2013 were recently revised -- downward from 1.8 percent to 1.1 percent. For perspective, four years into the recovery from the last deep recession in '81-'82, the economy grew at 4.1 percent.

What about the declining "labor force participation rate"?

This counts the percentage of civilians 16 years and older working or actively looking for work. When President Barack Obama took office, the labor force participation rate was 65.7. Today it is 63.4, up 0.1 from April's 34-year low. Frustrated, many able-bodied and able-minded would-be workers have simply given up looking for jobs.

The number of people receiving federally subsidized food assistance today exceeds the number of full-time, private-sector working Americans. The number of Americans receiving foods stamps (now called SNAP) has reached 47.5 million, increasing an average of 13 percent a year from 2008 to 2012. Almost 9 million disabled American workers currently collect federal Social Security benefits -- double the number of disabled in the late '90s -- many admitting that they could work, but choose not to look.

Even left-wing media outlets like ABC and The Washington Post cannot pretend that this is normal. About the advance estimate of the most recent quarter's dismal 1.7 percent growth, a Post business writer said: "It isn't even mediocre. It's terrible. It's a sign of the diminished economic expectations ... that it's anything to crow about at all. ABC called this latest report "disappointing." Of course, neither ABC nor The Washington Post attributed the disappointing results to anything President Obama has done.

But President Ronald Reagan took an entirely different course than has Obama. Reagan dramatically lowered taxes, reduced the speed of domestic spending and continued deregulation policies of Jimmy Carter. The economy took off, and three years into recovery, had produced an 8.9 percent increase in civilian employment -- almost 9 million jobs, with a post-recovery GDP that averaged over 5 percent.

The Reagan recovery was no aberration. Spending and tax cuts between 1922 and 1929 gave us the so-called "roaring '20s," when unemployment fell from 6.7 percent to 3.2 percent, and real gross national product grew at an annual average rate of 4.7 percent. Similarly, when President George W. Bush lowered taxes, the economy took off, and the unemployment rate went down to a low of 4.4 in 2006.

Democrats brag about the robust Clinton economy. But President Bill Clinton inherited an economy in its 22nd month of recovery. And Democrat historians ignore the economy-damaging measures that Clinton attempted -- most notably HillaryCare -- but could not pull off because Republicans stopped him.

Seventy-four percent of small-business owners say they plan to reduce hours, put off hiring or fire people to minimize the impact of ObamaCare. ObamaCare kicks in at 50 employees and applies to full-time workers. So employers keep the number of workers under 50 and-or reduce hours to less than full-time (30 hours or more), and they get around ObamaCare. What this does to the economy and job creation is another story.

In 2009, Obama's economic team outlined the path of the economy "if we do nothing" versus the path of the economy with Obama's plans for stimulus and ObamaCare. Team Obama predicted an unemployment rate, at this point in the recovery, of 5 percent -- with his "stimulus." If Obama did nothing, they predicted, unemployment would reach 5 percent by the beginning of 2014. Today unemployment is at 7.4 percent, artificially low considering the number of people who have given up.

What will it take for them to say they were wrong? How many more Americans must remain unemployed or underemployed before the left stops blaming G.W. Bush, the GOP-led House or global warming?

Historically, the deeper the recession, the higher the bounce back. Since World War II, this recovery has been by far the weakest. The question is why.

Our history shows that burdening the productive through higher taxes, especially during sluggishness, hurts the economy. Imposing billions of dollars in new federal regulations, as this administration has done, hurts the economy. Placing nearly one-seventh of the nation's economy -- via ObamaCare -- under the control of the federal government hurts the economy.

This is an arrogant administration led by a man distrustful of the private sector and devoid of experience in it. Obama is cheered and emboldened by a compliant media that would "report" relentlessly on the "jobless recovery of President X" were these the economic numbers of a Republican president. Stacked with power-assuming administrative "czars," the Obama administration fancies itself enlightened and noble, in complete possession of the wisdom needed to know from whom to take and to whom to give.

Therefore, to paraphrase former Secretary of State Hillary Clinton, "What difference do these bad numbers make?"