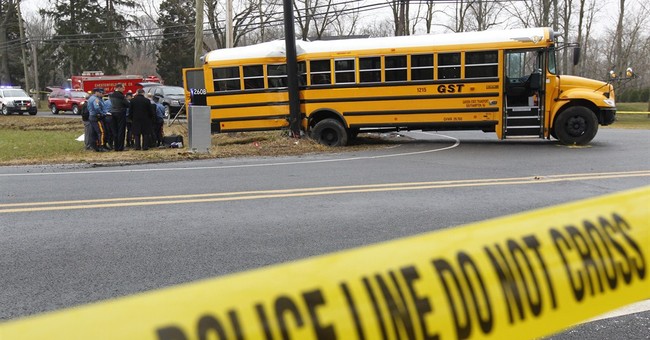 "I think you should check out the APEX program," my high school counselor Mrs. Workman suggested.

In my case, I had exhausted all of the Spanish courses at Crenshaw High, the predominately black inner-city school I attended. But Fairfax, predominately Jewish, had higher-level courses and would accept me.

"It'll be a way for you to continue your Spanish -- where, I see from your transcript, you excel. I'd suggest you do this," she said.

"How does the program work?"

Each morning, she explained, a school bus would pick up the APEX students -- by definition a group of supposedly "high-level, college-bound kids" -- and bus them to their chosen school. We would attend two classes each morning at the APEX school, after which we would be bused back to Crenshaw.

Mrs. Workman laughed, "I expect you to do well."

About that I had little doubt. After all, I made mostly A's, and did particularly well in Spanish. I ranked sixth or seventh in a class of 250. Of course I would do well.

I knew I was in for a ride when I walked into class that first day at Fairfax. The teacher greeted me in Spanish. But I noticed that everyone in the class spoke in Spanish. I don't mean the halting way I spoke, with iffy grammar and conjugation. These kids were fluent! I was shocked.

Despite the stack of Spanish course A's I had piled up since middle school, I never really thought achieving fluency in a class setting was possible -- unless you lived in Mexico or Spain or had Spanish-speaking parents.

When I came home from that first day at Fairfax, I cried.

"These A's I'd been getting," I told my mom, "were crap. Probably C's at Fairfax. It's as if I'd been playing Little League baseball -- and now I'm playing against the Dodgers."

I got an F on my first test. This was followed by more F's and D's. There was a lot of oral class participation, and the teacher and students were patient as I butchered the language. They felt sorry for me.

The final exam, which accounted for most of the grade, was a written book report on Don Quixote -- also to be given orally, without notes, while standing in front of the class. Holy bleep!

I busted my butt, worked my way through the book, and wrote and memorized my presentation. I checked and rechecked my report. Then I practiced it in front of the bathroom mirror. Never had I worked as hard on anything in school. I vowed not to be embarrassed.

I spoke third. After each student spoke, the no-nonsense teacher immediately critiqued the speech, corrected grammar and syntax, and offered ways to improve.

My turn. The walk to the front of the class took forever. "I'll show them," I said over and over. I cleared my throat and let it rip. I knew I had rocked when, after I finished, no one said anything, not even the teacher. Who was that fluent guy in Larry's body?

I told my mom what happened. She didn't use the word "voucher," but she wondered why parents couldn't choose the school to which they send their kids, rather than the one -- good or bad -- that happens to be the closest.

"Doesn't seem right," said Mom. My Fairfax experience, she said, "shows what happens when kids are pushed. I can't do anything about this. But maybe someday you can."

Hopefully, I just did.