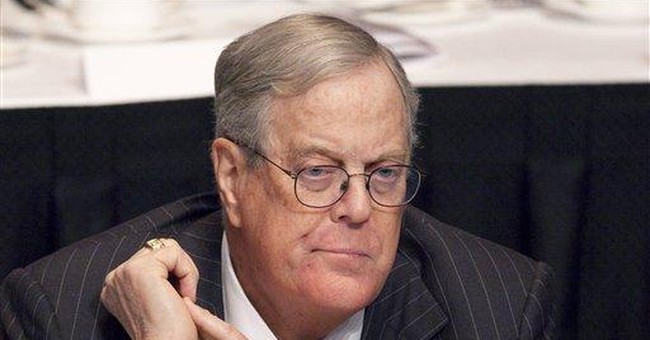 Trending
Hearing rumors that the billionaire, libertarian Koch brothers might buy the Los Angeles Times, the L.A. City Council sprung into action. Three members proposed a motion to oppose the sale of the Times to any owner seeking to turn "L.A.'s metropolitan daily into an ideological mouthpiece." Cue the laugh track.

UCLA professor Tim Groseclose wrote "Left Turns: How Liberal Media Bias Distorts the American Mind." Of 20 major news outlets, he found 18 were left-wing. Only two tilted to the right -- The Washington Times and "Fox News Special Report." Groseclose argues that media bias gives Democrats an 8- to 10-point electoral advantage. Take away the leftist bias, he says, and states would vote like Texas. A powerful pulpit like the Times in non-liberal hands could chip into that advantage.

How left-wing is the L.A. Times?

Consider this December 1993 editorial in which the paper effectively urged the repeal of the Second Amendment:

"You will not feel safe, your children will not be safe, until there are almost no guns on the streets and in the homes. No guns, period, except for those held by law enforcement officers and a few others, including qualified hunters and collectors. ... We must, as a nation, move toward a very different model, one that presumptively bars private citizens from owning a firearm unless they can demonstrate a special need and ability to do so. ... We think the time has come for Americans to tell the truth about guns. They are not for us; we cannot handle them. They kill people, our children included. It's time to get rid of them. Period."

The Los Angeles Times does not have a single local, regular non-leftist columnist who writes about politics. Not one.

Before the Supreme Court decision upholding ObamaCare, Times' columnist David Lazarus questioned the motives of ObamaCare opponents: "That's an act of pure selfishness (even though we'd all benefit from having fewer people relying on emergency services for treatment). It's also a display of heartlessness unbefitting a country that claims to define itself by love-thy-neighbor Judeo-Christian values."

Another columnist, Patt Morrison, thinks that the legal basis for ObamaCare rests in the preamble to the Constitution. "You know," she said to me, "the part that says 'provide for the domestic tranquility.'"

Another longtime business columnist, Michael Hiltzik, pushes the left-wing analysis that greed and lack of oversight caused the financial crisis. Forget about the minority reports filed by the Republican members of Obama-appointed Financial Crisis Inquiry Commission. One wrote: "Although there were many contributing factors, the housing bubble of 1997-2007 would not have reached its dizzying heights or lasted as long, nor would the financial crisis of 2008 have ensued, but for the role played by the housing policies of the U.S. government over the course of two administrations."

Another Times columnist, anti-gun Steve Lopez, appeared on my radio show, where I asked him, "How often do Americans use guns every year for self- defense?" No clue. When I told him that Florida criminologist Gary Kleck estimates that each year 2.5 million Americans use guns to defend themselves, Lopez was surprised and skeptical. OK, if that sounds wrong, what was Lopez's number? He didn't have one. Like most gun control advocates, he simply never even gave that side of the equation any attention. Incredible.

A reader of the paper wrote to another Times columnist, Sandy Banks, and suggested she review one of my books. After all, did it not make the Los Angeles Times Bestseller List? Unbeknownst to Banks, the reader sent me copies of their correspondence. Banks wrote that she would "never" review a Larry Elder book because he serves as "a lackey for white America."

Here's how L.A. Times movie critic Mary McNamara reviewed "The World According to Dick Cheney," a surprisingly balanced documentary: "'I don't spend a lot of time thinking about my faults,' Cheney says early on, as if this were a good thing. So here he is, a man with no regrets, as queasily fascinating as a two-headed calf or a 'real unicorn.'"

After yet another one-sided front-page story on abortion, then-Los Angeles Times Editor John Carroll wrote in an internal memo: "I'm concerned about the perception -- and the occasional reality -- that the Times is a liberal, 'politically correct' newspaper. Generally speaking, this is an inaccurate view, but occasionally we prove our critics right. We did so today with the front-page story on the bill in Texas that would require abortion doctors to counsel patients that they may be risking breast cancer." Occasionally we prove our critics right?

On May 21, Angelenos go to the polls to vote for mayor, city attorney, controller and several city council races. The Times did not endorse a single Republican candidate.

Whether the purchase of the Los Angeles Times makes business sense remains an open question. But the reporting, editorial positions and parade of left-wing columnists already serve as an ideological mouthpiece -- only a left-wing one.