Shirley Sherrod, Quit While You're Ahead 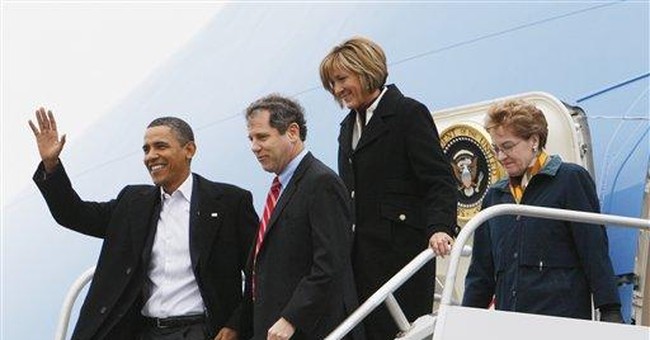 Who knows what lies ahead for Shirley Sherrod -- a book, the lecture circuit, a wrongful discharge lawsuit that could bring millions? But if she keeps talking, the woman "wrongfully portrayed" as a racist may out herself as exactly that.

Andrew Breitbart, a "right-wing" critic of the traditional liberal media, operates websites designed to expose the liberal bias of politicians, Hollywood types and the news media. He rejects the tax-and-spend, grow-the-government, race-based/identity policies of the left -- and believes these policies are aided and abetted by the left-wing media.

This makes him a marked man -- with no margin for error.

Angered by the NAACP's resolution condemning alleged "racist elements" in the Tea Party movement, Breitbart posted an excerpt of a speech that Sherrod, then a black employee of the Department of Agriculture, gave at a March NAACP function. In the excerpt, Sherrod appeared to boast about refusing, on racial grounds, to give full assistance to a white farmer seeking her help to save his farm from foreclosure.

This made the NAACP, in Breitbart's opinion, guilty of hypocrisy. The NAACP condemns racism within the Tea Party. But when a government official acknowledges anti-white racism at an NAACP-sponsored speech, the organization, by its silence, tacitly approves of her objectionable behavior.

Conservative commentators and websites quickly picked up on and reacted to the video. In short order, Sherrod, under pressure, "resigned" from her job.

But the excerpt -- sent by an unnamed source -- was taken out of context. And Breitbart apparently never asked for and never saw the entire speech before posting the excerpt. In fact, in the nearly 45-minute NAACP speech, Sherrod said she overcame her reluctance to assist the white farmer and worked aggressively to help him save his farm. Thus, Sherrod actually shared her story of personal redemption, that life's struggle is not that of black vs. white but, in her opinion, about overcoming economic disadvantage.

Embarrassed, Secretary of Agriculture Tom Vilsack apologized to Sherrod for pressuring her into resigning and urged her to return with a promotion. Sherrod even spoke to President Barack Obama, who expressed regret over her mistreatment.

Sherrod is now heralded as a symbol of a black woman unfairly victimized by the wretched, vicious, racist tactics of Breitbart in particular and the "right wing" in general. CNN aired an hourlong story on her life. Outlets printed stories about her upbringing in segregated Georgia, where she worked as a civil rights activist. We learned that when Sherrod was 17, a white man shot her father in the back and an all-white grand jury declined to indict. She married a minister named Charles Sherrod, a respected longtime civil rights activist and founding member of the Student Nonviolent Coordinating Committee.

But what about the rest of Shirley Sherrod's NAACP speech?

She made this observation about those who opposed ObamaCare: "I haven't seen such mean-spirited people as I've seen lately over this issue of health care. Some of the racism we thought was buried. Didn't it surface? (Audience responds approvingly.) Now, we endured eight years of the Bushes, and we didn't do the stuff these Republicans are doing because you have a black president."

So the self-proclaimed colorblind woman attributes legitimate opposition to the government takeover of health care ... to racism.

And what motivated Breitbart to post the out-of-context excerpt? Was Breitbart erroneously, but in good faith, using it to hold the NAACP to the same standard the organization asks of the Tea Party? Not according to Sherrod. She told CNN: "I know I've gotten past black vs. white. He's probably the person who's never gotten past it and never attempted to get past it. ... I think he would like to get us stuck back in the times of slavery. That's where I think he'd like to see all black people end up again. ... I think that's why he's so vicious against a black president, you know. He would go after me. I don't think it was even the NAACP he was totally after. I think he was after a black president."

This from someone who's "gotten past black vs. white"?

Her husband, the Rev. Sherrod, spoke this year at the University of Virginia School of Law. In the half-hour excerpt posted on YouTube, he talks about the evolution of the black struggle for freedom and equality and about his personal experiences with prejudice and brutality. He said he found inspiration from the Rev. Martin Luther King's vision of a society that judges people by the content of their character. But the Rev. Sherrod later said: "Finally, we must stop the white man and his Uncle Toms from stealing our elections. We must not be afraid to vote black, and we must not be afraid to turn a black out who votes against our interests." He provided no example, explanation or elaboration.

Breitbart erred in not viewing the entire NAACP speech. But neither this nor the past racist experiences of Shirley and Charles Sherrod justify giving them a pass for their own racist comments.