ObamaCare: Does It Cover 'Stupidity'? 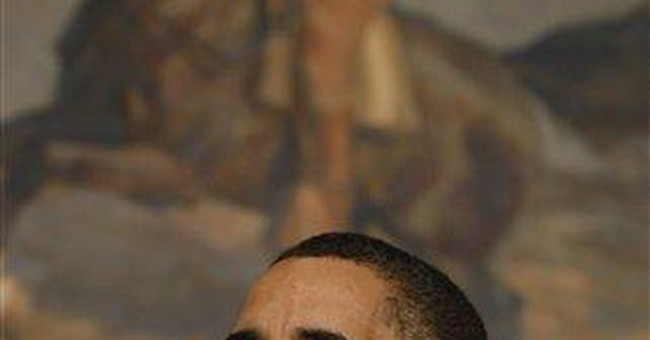 Americans overwhelmingly like their health care and their health insurance. While Americans reject ObamaCare, the President and Congress insist on driving it through.

To address this, the President and the Democrats are this close to a complete government takeover of health care. And a takeover it is. Assuming some kind of plan reaches the President's desk, it will -- at minimum -- force all Americans to purchase health insurance or pay fines or worse. It will force nearly all employers to provide health insurance or pay fines. It will tell health insurers that they must accept applicants with pre-existing illnesses and restrict their ability to "discriminate" based on factors like sex and age.

Incredibly, the President and Congress tell us that our economic recovery hinges on "health care reform" and that they can achieve it -- providing millions of people with health insurance estimated to cost a trillion dollars in the first decade -- while simultaneously reducing the deficit. The plan anticipates cutting hundreds of billions from the popular Medicare programs, whose beneficiaries vote in numbers greater than any other age group. Doctors and hospitals already complain that Medicare reimbursements fall short of costs, let alone profits. Good luck with that.

"Health care reform" achieves its deficit-reducing magic by collecting taxes in the early years -- building up money -- while paying out very little. Only after the first four years does money go out. It also forces states to pick up part of the tab. So, voila, it actually reduces the deficit -- at least in the first decade.

Then what? The Congressional Budget Office -- in cost estimates full of caveats, conditions and on-the-one-hands -- says that it could/might/may reduce the deficit in the second and third decades, too. Again, this assumes continued cuts in doctor and hospital reimbursements.

Despite the White House photo op of docs in their white frocks, most physicians oppose ObamaCare. They resent further government supervision and control over their practice. A poll commissioned by Investor's Business Daily found that 65 percent "oppose" ObamaCare and that 45 percent would consider taking early retirement or leaving their practice if the bill went through.

Given the broad opposition -- most Americans, most doctors and seniors in fear of cuts in Medicare -- why do it?

First, the Democrats -- now in control of all three branches of government -- have convinced themselves that they face a political price if they fail. ObamaCare supporters, based on bogus assumptions and inflated numbers, argue that many, if not most, bankruptcy filings are due to health care bills. If, as President Obama asserts, "reforming" health care and economic prosperity go hand in hand, how can they abandon it?

Second, while a large majority of Republicans and most independents oppose these "reforms," Democrats overwhelming support them. They consider health care and health insurance a right -- never mind the Constitution or the price tag -- and think "the rich" should bear the costs. Congresspersons fear an electorate upset at a failure "to deliver" a victory over the evil, money-grubbing insurance companies.

Third, many believe in good faith that this is the "right thing to do." This breathtakingly ignores the mountain of evidence that government command-and-control health care reduces quality, reduces innovation and inevitably leads to rationing. The president of the Canadian Medical Association says Canada's system -- a single-payer kind, favored by President Obama -- is "imploding." She calls for more competition.

Critics of America's health care system say that citizens in other countries enjoy longer life expectancies. But after adjusting for homicides, increased infant mortality due to teen pregnancies and low birth weights, obesity and other behavioral factors, the discrepancy disappears. Compare American medical outcomes against those of other countries. Our system produces the world's best results for cancer patients who go into medical care at the same time similarly situated patients enter their countries' care. Our pharmaceutical companies lead the world in coming up with new life-extending and -enhancing drugs, a record at risk given new controls and taxes under the guise of "reform."

When the ObamaCare bill comes due -- when the deficit explodes and the costs are "controlled" through government-directed rationing -- supporters, including President Obama, will long have departed Washington, leaving others to deal with the mess. In the meantime, bend over and cough. Or else.