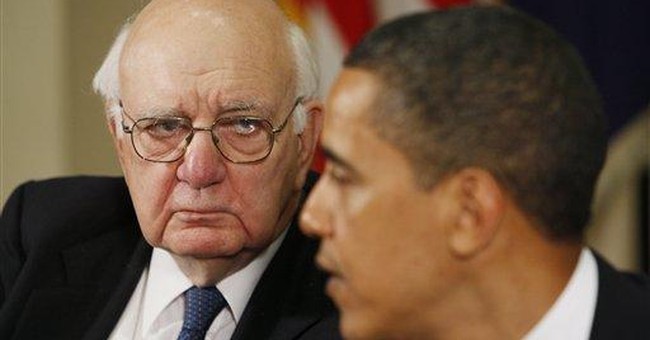 The topic: "The Future of Capitalism."

Time magazine, to discuss this, assembled a "stellar cast." One such "honoree" works as a Public Broadcasting Service/National Public Radio host. The tax dollars produced by the capitalism he criticizes help pay his salary. (The irony was apparently lost.) At least other "business roundtable" panelists -- commentator/publisher/author Arianna Huffington and singer John Legend -- make their money the old-fashioned way, by enticing consumers to buy what they sell.

"I don't think that left to its own devices," the taxpayer-supported broadcaster/pundit said, "capitalism moves along smoothly and everyone gets treated fairly in the process. Capitalism is like a child: If you want the child to grow up free and productive, somebody's got to look over the shoulder of that child." Good grief.

Every dollar spent by government is one less dollar spent by taxpayers. Money comes from somewhere -- taxes, borrowing (taxes on layaway) or printing, which, if not offset by productivity, causes inflation, a stealth tax on everyone. Who can spend, save or invest more efficiently and humanely, you or some tenured bureaucrat in D.C. who's never run so much as a hot dog stand or lent himself out as a United Way volunteer?

Private enterprise is the most proficient job- and wealth-creating "system" ever designed. But many, if not most, Americans think only government can and should build and run "infrastructure" and that government "investment" creates jobs of which the private sector is incapable of creating. Really?

People point to President Dwight D. Eisenhower's construction of the interstate highway system. It is, they say, an example of both an appropriate and productive federal government expenditure and an obviously legal role of the federal government necessary to spark economic growth.

In the early 1900s, a businessman, Carl Fisher, owned the Prest-O-Lite headlight company. He organized an association to finance coast-to-coast paved roads so that motorists could drive both day and night, ideally using his headlights. The association soon disbanded, when Congress passed the Federal Road Aid Act of 1916. What would have happened had government not built an interstate highway system? A consortium of truckers/gas stations/hotels/motels/roadside restaurants would likely have built one with their own money in order to make more money. They would have charged tolls for maintenance. Motorists actually using the roads would bear their costs.

Private business built the first leg of the New York subway system. And it made money -- at least before local government used taxpayer money to build competing systems and undercut the fare charged by the private operator. Tax dollars hid the true cost, allowing the city-owned service to charge less. Ultimately, the private operators sold out to the city.

Did Eisenhower have the constitutional authority to build the interstate highway system? Yes, but not to improve economic development -- and he knew it. In fact, the official name of the interstate highways is the Dwight D. Eisenhower National System of Interstate and Defense Highways. Ike argued that the country needed paved highways to move missiles around to protect the country. From a military standpoint, the argument was dubious. Missiles could be launched from fixed positions, as technology continually increased range, speed, accuracy and power.

The Founding Fathers identified a handful of allowable federal duties, not least of which is national security. But what about economic development? President James Monroe cast his only veto when Congress appropriated money to expand the Cumberland Road -- even though the road went through and would have helped his home state of Virginia. The Constitution, said Monroe, prohibits spending money for this purpose.

Rather than expanding "entitlements," they must be dealt with -- and eventually ended. What about selling land (the fed is by far the largest landholder) and using the proceeds to pay for current and near-term obligations to Social Security and Medicare -- with a view toward complete eventual privatization? What about private charity instead of Medicaid? What about a free market approach to making health care more accessible and affordable? This means IRA-type accounts; cutting health care insurance regulation; allowing nonlicensed practitioners to perform tasks now done only by government-licensed doctors and other medical practitioners -- which shuts out competition and keeps prices high; allowing health care plans to be purchased out of state; allowing individuals to deduct their health care premiums as businesses do now; and adopting an English-style "loser-pays" legal system, which would likely minimize the incentive for doctors to practice expensive "defensive" medicine.

Even if all of this makes sense, the toothpaste is out of the tube, right? So let's just try to stop things from getting worse. Unraveling the welfare state can be done. Indiana, for example, just leased one of its highways to a private consortium that charges tolls for maintenance and profit.

Obama is a neo-Marxist.