Rediscovering the 10th Amendment - Too Little, Too Late 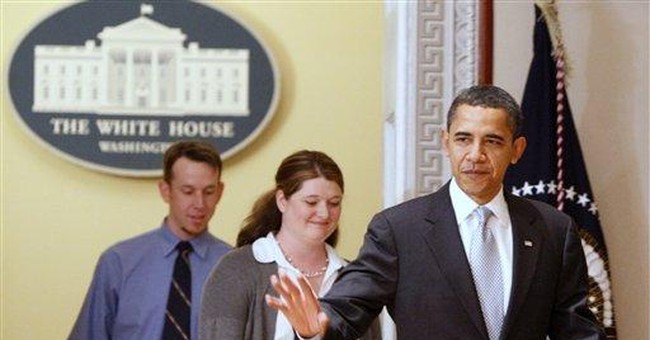 The New Deal, launched almost 80 years ago, represented a giant leap toward collectivism. But only in the last few weeks, as a result of President Barack Obama's New Deal Reloaded, have some 20 states rediscovered the Constitution and the 10th Amendment.

Article I, Section 8 of the United States Constitution sets forth the limited duties and obligations of the federal government. The Founding Fathers designed a federal government that focuses primarily on national security, the rules of naturalization and a handful of other matters. And the Ninth and 10th amendments to the Constitution leave all other rights and powers to the people and to the states, respectively.

Texas Gov. Rick Perry, standing with members of his state Legislature, said: "The 10th Amendment was enacted by folks who remembered what it was like to have a very oppressive government -- to be under the thumb of tyrants in an all-powerful government. Unfortunately, the protections it guarantees have melted away over the course of the years."

During the early days of President Franklin Delano Roosevelt's New Deal, the Supreme Court actually ruled that the Constitution meant what it said and said what it meant. The court, for example, unanimously struck down the National Industrial Recovery Act as the result of a lawsuit by a chicken slaughterhouse, which resented federal control of its business because it operated exclusively within New York state. So the Supreme Court pointed to Article I, Section 8, which reads, "Congress shall have Power … (t)o regulate Commerce … among the several States," and said the Constitution limited Congress to legislation involving interstate commerce, not intrastate commerce. The court was also concerned about the delegated, enumerated balance of power among the three branches of government -- legislative, executive and judicial -- especially the president's use of legislative power, because FDR issued the executive order authorizing the code imposed on intrastate commerce. Chief Justice Charles Evans Hughes wrote: "The President, in approving a code, may impose his own conditions, adding to or taking from what is proposed. … (T)he discretion of the President in approving or prescribing codes, and thus enacting laws for the government of trade and industry throughout the country, is virtually unfettered."

Gov. Perry likened the intrusion of the federal government to boiling a frog: Heat the water slowly and gradually so the frog doesn't react until it's too late and it perishes. Thus, Perry opposes constitutional-law-professor-turned-President Obama's massive federal intrusion into the states via the "bailout" plans.

But the resistance represents too little, too late.

In describing the constant blatant assault on the Constitution, one hardly knows where to start. The federal government runs Social Security, a 50-state Ponzi scheme that makes Bernie Madoff look like an underachiever. What about Medicaid? It is a federal/state program of health care for the poor. What about the Department of Education? It unconstitutionally involves the federal government in state-run education and comes with rules and mandates attached to the money.

Gov. Perry, mind you, intends to accept some federal bailout money because, as he puts it, Texans sent Washington the money in the first place. He refuses, however, to accept federal money, such as unemployment compensation dollars, because of the strings attached. But the very unconstitutionality of the federal government engaging in activities beyond those specified under Article I, Section 8, and sticking its nose -- conditions or no -- into the lives of the states doesn't seem to bother him. In other words, it's OK for the federal government to play nanny and violate the Constitution -- provided it does so without strings.

Ever since the ratification of the Constitution, federal lawmakers have attempted to circumvent it. President Franklin Pierce vetoed an 1854 bill to help the mentally ill, saying, "I cannot find any authority in the Constitution for public charity" and that such spending "would be contrary to the letter and the spirit of the Constitution and subversive to the whole theory upon which the Union of these States is founded." And President Grover Cleveland, when vetoing an 1887 appropriation to help drought-stricken counties in Texas, said: "I feel obliged to withhold my approval of the plan to indulge in benevolent and charitable sentiment through the appropriation of public funds. … I find no warrant for such an appropriation in the Constitution."

Today large numbers of Americans, to the extent that they even know about Article I, Section 8, couldn't care less about it.

FDR personified this view at the swearing-in ceremony for his second term. He later said that when it came to the words "support the Constitution of the United States," he thought, "Yes, but it's the Constitution as I understand it, flexible enough to meet any new problem of democracy -- not the kind of Constitution your court has raised up as a barrier to progress and democracy."