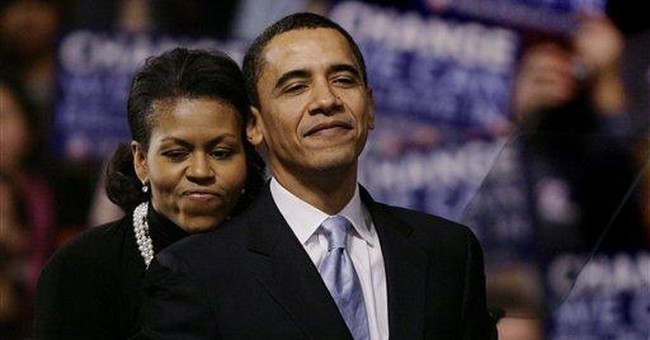 Black South Carolina state Sen. Robert Ford (a Democrat), back in February 2007, warned against a 2008 Democratic ticket headed by Sen. Barack Obama. Ford said, "It's a slim possibility for (Obama) to get the nomination, but then everybody else is doomed. Every Democrat running on that ticket next year would lose because he's black and he's top of the ticket. We'd lose the House and the Senate and the governors and everything. I'm a gambling man. I love Obama. But I'm not going to kill myself."

Al Sharpton, Jesse Jackson's soul mate, also sounded alarms against Obama, saying, "Just because you're our color doesn't make you our kind." Sharpton also asked, "Why shouldn't the black community ask questions? Are we now being told, 'You all just shut up'?" after a published report that he was jealous of Obama's campaign -- an accusation which, according to Sharpton, came from the Obama camp. Some thought Sharpton jealous of Obama, but Sharpton called such an assertion a ruse, an effort to get an early endorsement from him. "I'm not going to be cajoled or intimidated by any candidate," Sharpton said, "not for my support." A New York Observer editorial said, "The petulant Mr. Sharpton is telling people that Mr. Obama is 'a candidate driven by white leadership.'" Sharpton threw his support to Sen. Hillary Clinton, D-N.Y.

For the race-hustling firm of Sharpton & Jackson, Obama creates a dilemma. Why?

In a "60 Minutes" appearance back in February 2007, correspondent Steve Kroft asked Obama whether one could blame race in the event Obama fails to succeed. Obama said, "I think if I don't win this race, it will be because of other factors. It's gonna be because I have not shown to the American people a vision for where the country needs to go that they can embrace." In other words, he's saying if I fail, don't blame race -- a huge rejection of late defense attorney Johnnie Cochran's claim that "race plays a part of everything in America."

Assuming a presidential candidate agrees with you on most issues, a recent Los Angeles Times/Bloomberg poll asked, which of the following types of candidate would you not vote for? Respondents were given several choices, including: "Woman," "African-American," "Mormon" and "72 years old." The result? Only 4 percent of registered voters ruled out voting for a woman, while 3 percent of voters said they would not vote for an "African-American" candidate. Almost five times as many registered voters -- 14 percent -- said they could not vote for a Mormon or a 72-year-old.

We live in an age where mega-golfer Tiger Woods stands as the world's most recognizable athlete. Hollywood's current box-office leader is black actor Will Smith. Oprah Winfrey, a black woman -- and television's most powerful personality -- earns an estimated $260 million a year, with a $2.5 billion net worth as that medium's most powerful force.

Winfrey, publicly endorsing a presidential candidate for the first time, traveled to Iowa to stump for Obama. There on the stage sat Winfrey, Obama's Harvard Law-educated wife and Obama, himself, who became the first black to head the Harvard Law Review. Surrounded by a sea of mostly white Iowans, Winfrey and Obama spoke to an affectionate crowd that hung on every word.

Did state Sen. Ford reconsider his position after Obama won the Iowa caucus? Ford remains unmoved. "Of course you're going to have white liberals in a Democratic primary vote for Obama," said Ford. "That's why I'm concerned. You've got people in this country who wouldn't even vote for a black for dogcatcher, and now you want to ask them to vote for one for president of the United States?"

After Obama's Iowa victory, a smiling Jesse Jackson appeared on television. This is reminiscent of boxing promoter Don King, who enters the ring with his arm around "his guy." Then "his guy" loses, and Don King exits the ring with his arm around "his guy's" vanquisher. But Jackson came late to the party. Obama reflects a refreshing departure from the politics of black anger/white guilt that Jackson and Sharpton revel in. It's not 1954 anymore -- and most Americans consider this good news. But the firm of Jackson & Sharpton fights battles long since won, committed to viewing the world through race-tinted glasses.

Time for a new pair of specs.