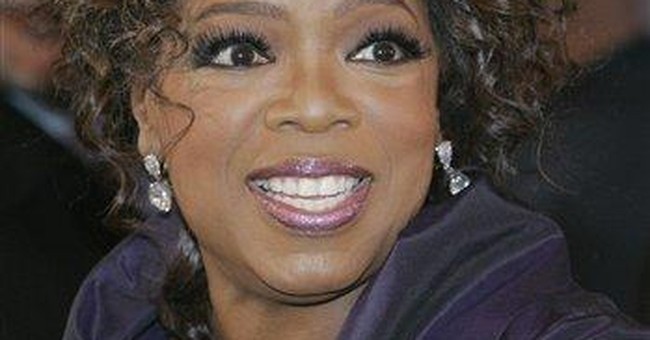 Oprah Winfrey, talk show host/media powerhouse, wants Sen. Barack Obama, D-Ill., to become president. According to Winfrey, she bases her support not on politics, but because Obama's candidacy sends a message of "hope."

But Winfrey's own success belies the notion of a "hope" deficit in America.

Oprah, a black woman raised in poverty, now boasts an estimated television audience of 48 million every week. Oprah's monthly magazine, O, has a circulation of 2.3 million. Oprah earns an estimated $260 million a year, and tops Forbes' annual "Celebrity 100 Power List." Forbes magazine also ranks Oprah Winfrey as the 21st most powerful woman in the world. (The magazine places black Secretary of State Condoleezza Rice at No. 4.)

Obama, raised in middle-class circumstances, was born to a white mother from Kansas who met and married his Kenyan father while attending the University of Hawaii. Barack Sr. left his wife and toddler son to pursue a graduate degree at Harvard. True, Obama's father abandoned his family, but a few years after Obama's mother remarried an Indonesian man and moved to Jakarta, 10-year-old Obama was sent to live with his white, middle-class grandparents in Hawaii. He attended the prestigious Punahou Academy, matriculated to the elite Occidental College in California and transferred to Columbia University. He then went to Harvard Law School, where he became the first black to serve as president of the Harvard Law Review.

Obama himself acknowledged his privileged background in his book, "Dreams from My Father." He chastised a black prep school friend who Barack thought was unreasonably angry, and urged his friend Ray to drop the angry black man act:

"Our rage at the white world needed no object, he seemed to be telling me, no independent confirmation; it could be switched on and off at our pleasure. Sometimes . . . I would question his judgment, if not his sincerity. We weren't living in the Jim Crow South, I would remind him. We weren't consigned to some heatless housing project in Harlem or the Bronx. We were in goddamned Hawaii. We said what we pleased, ate where we pleased; we sat at the front of the proverbial bus. None of our white friends treated us any differently than they treated each other. They loved us, and we loved them back. Shit, seemed like half of 'em wanted to be black themselves -- or at least Dr. J."

"Maybe we could afford to give the bad-assed n----- pose a rest. Save it for when we really needed it."

Now compare Obama's background to that of Oprah Winfrey. Winfrey, by contrast, was born to unwed teenage parents in Mississippi. She was raised by her grandmother until the age of 6, when she was sent to live with her mother in Milwaukee. She was raped by a cousin when she was 9, and later molested by a friend of her mother's and by an uncle. She never told anybody about the abuse, but repeatedly ran away and got into trouble. At 14, she gave birth to a boy, who died shortly after birth. An apparently out-of-control Oprah was sent to live with her father in Nashville. Her father, who had been serving in the armed forces at the time of her birth, enforced strict rules and discipline, including curfews and high grades in school. He required his daughter to read a book every week and write a book report on it.

Hope for minorities in America?

If black America were a separate country, its earned income was $679 billion in 2004. How many blacks know that blacks serve as CEOs for Time Warner, American Express and Merrill Lynch? Only 3 percent of registered voters said they could never vote for a black, and 4 percent said they could never vote for a woman. Care to name the most powerful star in America? Black actor Will Smith. The total worldwide box office of Smith's films exceeds $4 billion!

About Obama, Winfrey said, "I'm reading his book right now called 'The Audacity of Hope,' and I think his sense of hope and optimism for this country and what is possible for the United States is the kind of thing that I would like to get behind."

Yes, some day American voters will elect a black president. "60 Minutes" interviewed Winfrey just as her talk show went national. Asked about her future, she said that she considered her future so bright that it "blinds my eyes." Indeed. Her astonishing success shows that the "hope" express left the station a long time ago.