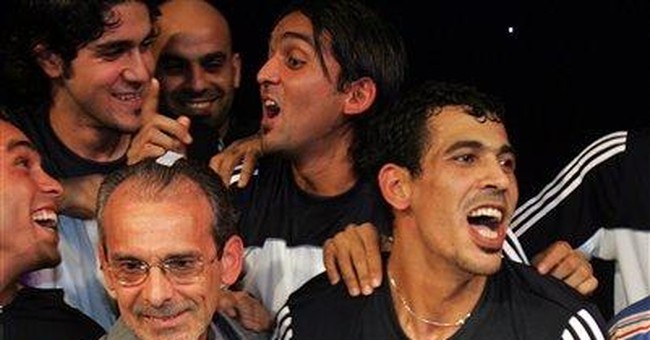 I did it again -- opened my mouth.

I drove behind a car carrying two guys. Their bumper sticker read, "War Is Not the Answer." I knew better, but I pulled up next to them at a red light, rolled down my window, and said, "OK. If war is not the answer, what is?"

"Just curious," I said, "do you think people in Tehran drive around with bumper stickers like that?"

"So you support the war?!" his passenger shouted.

Gee, I thought, what a sudden change of topics. All I wanted to know, if war is not the answer, then what is?

"Which war?" I said. "Iraq? Afghanistan? World War II? The Civil War? Can you be a little more specific?"

The passenger turned purple. "The war in Iraq! And where are the weapons of mass destruction?"

"Look," I said, "I've got some bumper stickers in my trunk that say, 'Beheading Is Not the Answer.' Would you guys like a couple?"

Ah, yet another example of the "return to civility" after the Democrats' recapture of Congress. But my "antagonist's" question about the weapons of mass destruction raises an interesting point. Suppose we actually located stockpiles of WMD, whether in Iraq or discovering Saddam shipped them out -- possibly to Syria -- before, during and after the invasion. Would the Bush anti-war critics support the Iraq war? Who knows? But a friend told me something that provides a clue.

Recall that for a brief period of time, our military did, in fact, locate WMD. The story almost immediately became discounted, as the "WMD" turned out to be old and worn, unlikely to pose any threat. My friend, an actor, told me that he and several other actors were on a set working together. One said, "F---, they found the WMD!" Not, "Hey, I might have to reconsider my opposition to the war because our military found WMD." Or, "I feel relieved about the war, the president was right." Or, "The discovery of the WMD shows that we did, indeed, face the possibility of Saddam handing off the WMD to a terrorist or even using the stuff himself on America or American interests." But, no. The near-unanimous reaction -- my friend kept his mouth shut -- was, "That bleeping Bush was right."

This brings us to more unpleasant recent news -- at least, if you consider the Iraq war a "quagmire."

How about some love for Bush, who, after all, now seems, at least a bit, like a uniter, not a divider?

"Support for Initial Invasion Has Risen, Poll Shows," ran the headline in a major American newspaper. Support for the war, at 35 percent in May, now registers at 42 percent, a gain of 20 percent. The next day, the newspaper explained on its website, "The war in Iraq is the single most important ongoing news story right now. Public opinion about the war is a critical part of that story. That's why when we had a poll finding about the war that we could not explain, we went back and did another poll on the very same subject. We wanted to make sure we had gotten it right."

But stunned by the poll results, the paper ran a second poll to confirm the results. Its explanation: "The July numbers represented a change. It was counterintuitive." Apparently, so counterintuitive that, after calling the Iraq war "the single most important ongoing news story," the paper reported the uptick in support for the war on page A-9.

Now for the Iraqi "surge."

In an article headlined "Al-Qaeda Faces Rebellion From the Ranks," the London Times writes, "[D]ozens of low-level members of al-Qaeda in Iraq are daring to become informants for the US military in a hostile Baghdad neighborhood. The ground-breaking move in Doura is part of a wider trend that has started in other al-Qaeda hotspots across the country and in which Sunni insurgent groups and tribal sheikhs have stood together with the coalition against the extremist movement."