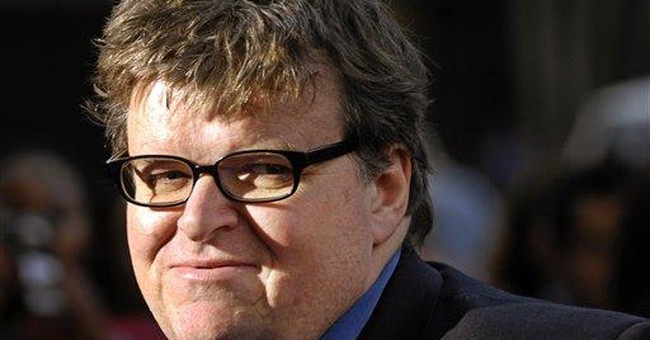 Nearly 50 million Americans without health-care insurance? For what it's worth, the Centers for Disease Control puts the number of uninsured at 43.6 million, and the Census Bureau at 44.8 million.

First, understand that lack of health-care "insurance" does not mean a lack of health care. Many emergency rooms, by law, provide medical care to anyone who walks in, whether an illegal or legal resident of this country.

Over 14 million of the uninsured, according to the Census Bureau, live in households earning $50,000 or more annually. Over 7 million are in households earning more than $75,000 a year. These people could afford health-care insurance, either out-of-pocket or by making minor adjustments to their lifestyles. A small number of the uninsured include criminals. Should taxpayers provide health care for them, as well?

"Sicko" followed the travails of Americans with health-care insurance -- their squabbles with their providers, denials of treatment by insurance companies, their dissatisfaction with the unwillingness of insurance companies to cover certain procedures. But according to an ABC News-Kaiser Family Foundation-USA Today survey, 89 percent of Americans with health-care insurance say they are, in fact, satisfied with the quality of care they receive.

To "solve" health care, Moore wants America to adopt a European or Canadian style of universal health-care, or single-payer system. Does Moore really expect Americans to tolerate long lines for services, months-long delays for important, critically necessary operations and procedures, and the rationing that inevitably occurs with a government-takeover of health care?

Canada? A recent government study said that only half of ER patients received health care in a timely fashion. Lindsay McCreith of Ontario was supposed to wait four months for an MRI, and then wait several months more to see a neurologist for his malignant brain tumor. But instead, McCreith -- like many other ill Canadians -- came to the United States for life-saving surgery.

France? Nearly 13,000 people died in the summer of 2003. Why? The number suffering from the heat so overwhelmed the French health-care system that hospitals simply stopped answering their phones and ambulance attendants told people to take care of themselves. The majority of the 13,000 died from simple dehydration.

To address the "crisis" of the medically uninsured, Moore follows down the same dreary path of those who wish to improve America's education -- ignoring the benefits of competition. Why, for example, do elective medical procedures -- those not covered by health-care insurance -- become increasingly affordable? Cosmetic surgery procedures, nose jobs, breast implants, hair grafts, facelifts and vision-corrective eye surgery steadily decline in price.

Stifling regulations, price controls and outright attacks on free market medicine make things worse. A decade ago, an entrepreneur who operates a for-profit medical school in the Caribbean island of Dominica attempted to build one in America. He scouted the country and figured that Wyoming's doctor shortage created ideal conditions for a for-profit medical school. Compared to the national average of one doctor for every 441 people, Wyoming had only one doctor for every 642 people.

But local doctors pounded the table, warning that the medical school would produce unqualified doctors. Never mind that 92 percent of students graduating from his off-shore medical school passed their U.S. basic level tests on their first try, a slightly higher rate than the U.S. and Canadian average. Wyoming doctors and the national accrediting agency for medical schools successfully fought the proposed school.