The Iraq War's Other Front -- My Doctor's Office 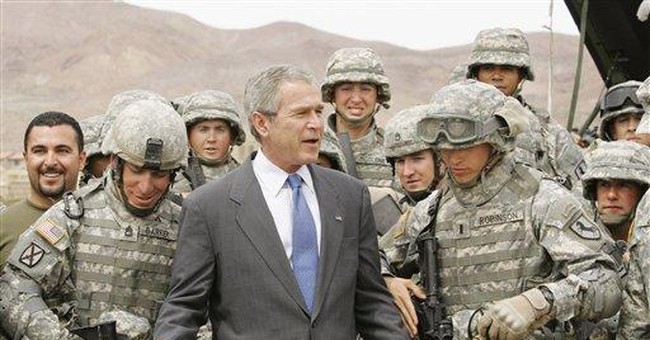 Standing at the check-in window of my doctor's office, awaiting my annual prostate exam, I heard a staff member yell out with a smile, "Hi, Mr. Elder. How does it feel to be one of the last guys who supports the war?"

The 20-something-year-old receptionist, who was signing me in, then narrowed her eyes, and the volcano erupted. She tore into an emotional, convoluted, fact-challenged barrage against the president. He lied us into the war, and too many of our soldiers are dying. He's incompetent. He sent young men and women to die for oil and for Halliburton. While he plays commander in chief, the middle class shrinks. He cares only about the rich. His racism showed in his handling of Katrina. Yadda, blah, etc.

I tried to remain calm while considering the source. In general, depending upon the setting, I try to conserve my mood and my energy. But, then there are other times -- and this was one of them.

"You talked about the number of our military personnel who have died in Iraq," I said, "3,500 and counting." "Do you happen to know how many died in World War I?"

"What about Korea and Vietnam?"

"What about World War II?"

Soon the other staff members behind the receptionist began to listen, as did the patients sitting in the waiting room.

"By the end of World War II," I continued, "400,000 Americans died. Again, adjusting for today's population, that means nearly 800,000 people -- or less than one half of one percent of those killed so far in Iraq. Of course, every life is precious, but I suggest that before you talk about the 'huge' amount of deaths, you gain some perspective."

"But, what about the lies?" she said.

"Why bother," I said, "maybe my prostate could wait another year. I'll just go down and grab a hamburger."

But I said, "Are you familiar with the Robb-Silberman Commission that concluded the president did not lie about the intelligence on Iraq?"

"What about the Senate bipartisan panel that concluded the same thing -- that Bush didn't lie?"

"What about David Kaye?" I said.

"He's the guy Bush sent to Iraq to find stockpiles of WMD. While he didn't find stockpiles of WMD, he spoke of the possibility that Saddam transferred WMD out of the country during the run up of the war. Perhaps more important, he said that no intelligence analyst -- all of whom, by the way, thought Saddam had stockpiles of WMD -- felt pressured to lie simply to provide a motive for Bush to go to war."

"But, we have been in Iraq longer than we fought the whole World War II. This is crazy," the receptionist replied.

"Crazy?" I said, "I know of no stopwatch for war. During the Civil War, both sides expected it to last just a few weeks, no more than a few months. During the Revolutionary War, Gen. George Washington lost battle after battle such that some wanted him replaced by a more competent general. The early years of World War II seemed particularly gloomy, but President Franklin Delano Roosevelt didn't say, Well, we've been at this for a bit. Let's call it a day and go home.'"

That was too much for a guy sitting in the waiting room, who chimed in, "But the war has made things worse."

So now, I am getting it from all sides.

Turning to the gentleman, I said, "I guess you assume that everything was going swimmingly until Bush stuck a stick into the hornet's nest. Do you remember the 1979 seizure of American hostages, who were held for over 400 days? Do you remember the bombing of the Khobar Towers in Saudi Arabia? Do you remember the attack on the Marine barracks during the Reagan Administration, or the attacks on our embassies in Tanzania and Kenya? What about the first attack on the World Trade Center in 1993? Not to mention the attack on 9-11 that killed over 3,000 on U.S. soil. Yeah, if only Bush hadn't ticked off so many people, the Disney Company, by now, would've built a theme park in Pakistan."

And so it went. To paraphrase Osama bin Laden, if we lose the war in Iraq, it will not be lost on the battlefield, but in places like my doctor's office.

"Mr. Elder," said the nurse's assistant, "the doctor will see you now." And not a moment too soon -- for them.