If They're Wrong About Gore-bal Warming, So What? 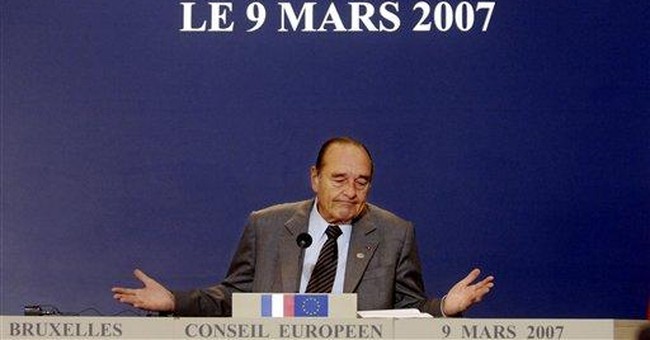 I'm a Democrat, and I enjoy your work. And I get very frustrated by those on the left who whine and are thin on the facts.

This brings me to my reason for this letter: Global warming.

The global warming debate is unique to humanity. If those who advocate "wait and convince more scientists" are wrong, following their advice may affect hundreds of millions of people, with possibly many killed by famine and flooding. On the other hand, if the people who advocate doing something now are wrong, the worst is mostly economic. That's a price I'm more than willing to pay to hedge my bets to protect the millions of lives at risk, as well as the ecosystems and animal species facing extinction.

Following the advice of the vast majority of the world's atmospheric scientists sounds like a bet all humans should take. -- Mr. Ph.D.

Progress! At least you do not say, as does Al Gore, that the debate about global warming in the scientific community "is over." Nor do you assert, as does CBS's Katie Couric, that "all the experts agree." The debate is not over, nor do all experts agree.

You suggest that if the scientists are wrong, the worst case comes down to a few lost bucks. No, the worst case results in lots of lost bucks, retarded economic growth, lost jobs and weakened worker pensions, all while making nations, especially Third World countries, less prosperous and thus less capable of adapting to whatever damage might occur as a result of global warming.

The Kyoto Accords cost hundreds of billions of dollars, and figure to increase the gap between the rich and the poor. More will starve, with countries becoming less financially capable of dealing with diseases like malaria, HIV/AIDS, etc. Funds directed toward combating global warming mean less money for immediate crises like those mentioned. This can result in greater political instability and tyranny, with more failed states receptive to the Islamofascist lie that rich nations become so "at the expense of poor ones."

Furthermore, many scientists and economists see a small-benefit to high-cost ratio, again therefore diverting money otherwise spent on improved technologies that could wean us away from environmentally polluting energy sources, some of which come from hostile, politically unstable nations. This means less money for R&D on wind, solar, nuclear and other non-fossil fuel alternatives.

Life involves trade-offs. You underestimate the cost side while overestimating the benefit side. "Environmentalists" like Rachel Carson, author of "Silent Spring," helped to create the hysteria that eliminated DDT. The result? The return of malaria and needless deaths.

Kyoto already fails to meet its objectives in European countries that ratified the accords. Non-signatories like India and China, on the other hand, will soon become the biggest CO2 emission polluters. Neither nation has or will likely sign on to Kyoto. Thus any benefits -- and again many scientists expect only negligible, if any, post-Kyoto benefits -- will be offset by polluting nations like India and China.

Why does government need to mandate our way "out of this"? The Toyota Prius caught the public's fancy less because of government inducements and government R&D, and more because the company provided a product that consumers wanted. Understand this: the more prosperous a nation, the more its citizens can afford to demand "clean" means of production. Poor nations face bigger concerns -- like feeding their population, and providing housing and other basic services. Right now, neither India nor China can afford the luxury of "green" policies before things like food, housing and clothing.

The environment, like people, adapts. Entrepreneurs, right now, pour billions into "alternative" technologies as the costs of fossil fuels -- both financial and political -- go up, while the price of "clean" fuels go down. These things take time.

Even some United Nations Intergovernmental Panel on Climate Change scientists say it's too late to reverse global warming. If so, oh well. Still others expect the "damage" to materialize centuries down the road, giving us plenty of time to change or adapt.

Why does speculating about things like global warming replace direct and immediate threats? Iran, for example, seeks a bomb. If they use it -- and they threaten to -- imagine the environmental damage to the planet, to say nothing about the genocide-like loss of human life. But where is the urgency?

Soon baby boomers will join the ranks of those on Social Security and Medicare, thus requiring younger workers to substantially increase their payroll taxes in order to allow boomers the same benefits enjoyed by their parents and grandparents. Where's the urgency?

Policy-makers face immediate, predictable and foreseeable -- and especially in the case of Iran -- serious around-the-corner issues. Yet we divert time, money and energy fretting about hypothetical "calamities" of global warming rather than dealing with real world/real time threats.