Democrat Versus Republican -- What's the Diff? 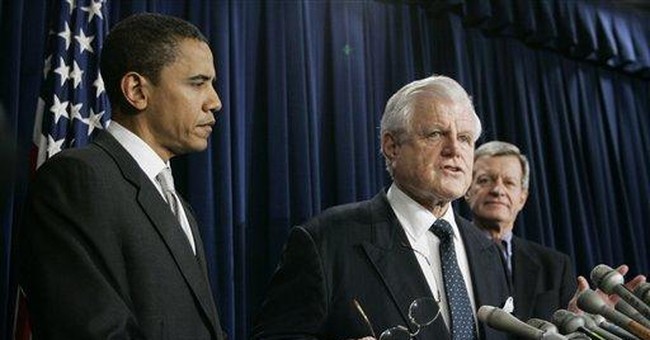 I am a vote everyone wants, because I am on the fence. I would not ever declare myself as Democrat, Republican, conservative or liberal. I am an American looking for leadership. I want someone who is honest to be my president, who cares more about my family's well-being than his or her own.

Bush, Cheney and Rumsfeld make me want to puke! No, they did not lie about the Iraq war, but did they twist words, spin stories and make poor decisions? Yes, I think they did.

From being overtaxed to feeling less than protected, I feel our government has failed us and continues to fail us.

We must protect our borders, eliminate the need for foreign oil and stop trying to police the whole darn world.

I work every day and cannot keep a pulse on what happens in our world. Help me make a decision.

I understand your confusion and disillusionment.

But I cannot accept your assertion that while Bush "didn't lie," he "spun." If he spun, then everybody did. Bush retained the same CIA director who served under Clinton. That Saddam possessed stockpiles of WMD reflected a virtually unanimous, worldwide opinion of the intelligence community. Going to war is not fun, and Bush did so for the national security of this country. That stockpiles were not found does not sweep away the other reasons for the war -- that Saddam had violated numerous resolutions, that he was shooting at the British and American planes in the "no-fly zones," that he had invaded his neighbors and therefore posed a threat to do so again and use resources to blackmail neighbors or fund continued terrorism, that he could handoff a WMD to another party. Pre-9/11, "regime change" became the official policy of the United States. Congress voted for this, and President Clinton signed on to it.

September 11 changed everything, and we went from passivity to offense. Saddam could have avoided war by fully declaring what happened to his WMD as was required by UN Resolution 1441. He didn't.

North Korea confirms the Bush strategy. Once a country goes nuclear, it stays nuclear (South Africa is an exception), and must be dealt with in a different manner. This explains why Iran races to acquire a nuclear bomb, an outcome the Democrats seem perfectly willing to accept. Never mind that Iran says Israel should be wiped off the face of the earth and that "God willing . . . we shall soon experience a world without the United States . . . ."

Weapons hunter David Kay's report shows that Saddam retained the capacity and intent to make WMD, and that WMD or components might have been transferred out of the country "pre-" and "post-conflict" with the U.S.

Democrats believe in strength through peace rather than peace through strength: Negotiating no-nuke deals with North Korea under Clinton; trying to appease Iran when that country took American hostages in '79 under Carter; the failed Oslo Accords under Clinton; and continually stating that the "road to peace" in the Middle East rests on "solving" the dispute between the Palestinians and the Israelis rather than recognizing the true enemy -- militant Islam.

This foreign policy worldview is not just naive and wrongheaded, it is dangerous.

I often say the GOP talks the talk -- about limited government -- but fails to walk the walk: prescription benefits for seniors, No Child Left Behind, pork-filled energy and highway bills, etc. But Democrats are worse. Their unbridled support for the welfare state guarantees that soon more than half the federal budget will go to entitlement programs, with a growing number of younger workers facing higher taxes to support the "benefits" received by older Americans. This statism explains Europe's double-digit unemployment percentage, which results from higher taxes, stringent business regulation and so-called "fair trade" policies -- a fancy term for protectionism against foreign competition in order to "save jobs." All of this causes less productivity, lowers living standards and deepens poverty.

Democrats seek to "fix" life's inherent unfairness by taking money from one group and giving it to another.

George W. Bush's approach to illegal immigration makes practical and political sense: comprehensive immigration reform. Secure the borders and prosecute employers who knowingly hire illegals. A temporary-worker program recognizes the reality of jobs that Americans refuse to do for the wages offered, especially given our welfare state that allows able-bodied and able-minded Americans to avoid work. What's the Democrats' plan?

All presidents disappoint. Life is imperfect. But ideal is not realistic. The question is, which party is more likely to keep us safe and growing? Yesterday's Democrats were people like Harry Truman and John Kennedy. Today, the face of the party is Nancy Pelosi and Ted Kennedy.

To me, the choice is clear. Larry