A Christmas story -- In the mall parking lot 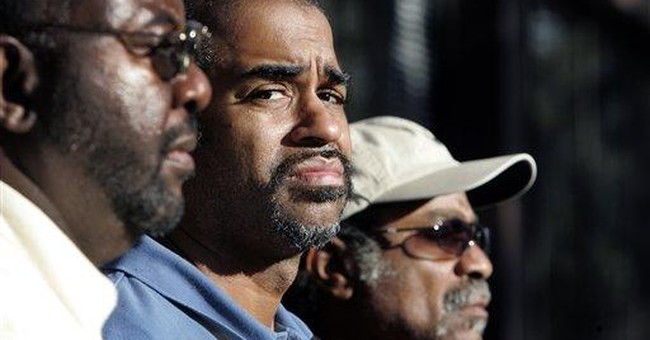 "Black Man Walking," read the headline of an article I just read in a local weekly newspaper.

The author lives in an affluent, predominately white area, and in the article he complained that when he goes for a walk, he notices whites crossing the street, presumably to avoid him. It happens so many times that the black guy, in order to "strike first," walks across the street when he sees whites approaching. This way, he beats 'em to the punch, let's them know how it feels.

The writer made no mention of the disproportionate amount of crime committed by black men, a fact that undoubtedly plays into the minds of the "racist" whites who cross the street when they see him. Even Rev. Jesse Jackson once said, "I hate to admit it, but I have reached a stage in my life that if I am walking down a dark street late at night and I see that the person behind me is white, I subconsciously feel relieved."

Nor did the writer seem to appreciate that now blacks can, in fact, move into exclusive, upscale, non-black areas. Take just one example. Singer Nat King Cole encountered racist resistance from neighbors when he became, in 1948, the first black to attempt to move into the elite, very affluent Hancock Park area in Los Angeles.

I told the author's story to my brother, Kirk, while he and I were walking through a parking lot next to a suburban bookstore two days before Christmas. I scoffed at the writer's "pain" by telling Kirk a recent story I experienced.

When driving to work a couple weeks ago, the convertible in front of me, with three young black men and a young black female driver, stopped for the red light at an intersection. But when the light changed to green, the convertible just sat there with the passengers yakking away. Not one of those who honks right away, I sat for a bit -- from seven to 10 seconds -- waiting for the driver to get going. Then I gently tapped my horn.

While I told this story to my brother, our pace slowed as we approached the bookstore. Soon, my brother and I stood still in an empty parking space as I finished my tale. "Was I a victim," I asked Kirk, "of being a black-man-driving-behind-a-convertible-full-of-black-people-who-flipped-me-off?" As I said this, I thrust my hand in the air, middle finger prominently stuck out, to re-enact and punctuate the story.

Just as I did this, a car that apparently had been waiting patiently for my brother and me to move from the empty space revved its engine and took off.

"Hey, Larry," Kirk said, "the guy in the car thought you were flipping him off, saying 'F-you, go park somewhere else.'" Having gotten so involved in my story, I didn't realize that we had come to a standstill, nor did I see the driver patiently waiting for us to get out of his way so he could park in the space where we stood.

The driver ended up parking many spaces farther away from the store, apparently frustrated that he got "flipped off" by a guy who stood in a closer parking spot. I suggested we go to the driver and explain that the hostile gesture was not meant toward him.

So Kirk and I turned and walked briskly toward the man -- a white guy in his mid-thirties -- as he got out of his car and walked toward the store. As we approached him, he looked terrified, probably thinking that the guy who flipped him off, and his companion, wanted some sort of confrontation.

"I was just telling my brother," as Kirk and I followed him, "about how some guys flipped me off after I honked at them. And just as I was telling the story, I shot my hand in the air to show how I got flipped off. I hope you don't think that I was flipping you off."

The guy slowed down, and turned and smiled. "Well, I did think you were saying something to me."

We laughed, the three of us, and chatted as we walked in the store. We talked about how we all hated Christmas shopping, especially at the last minute. And we all complained about this damn crowded parking lot.