Kurt Schlichter
|
Posted: Oct 25, 2021 12:01 AM
Share   Tweet
The opinions expressed by columnists are their own and do not necessarily represent the views of Townhall.com. 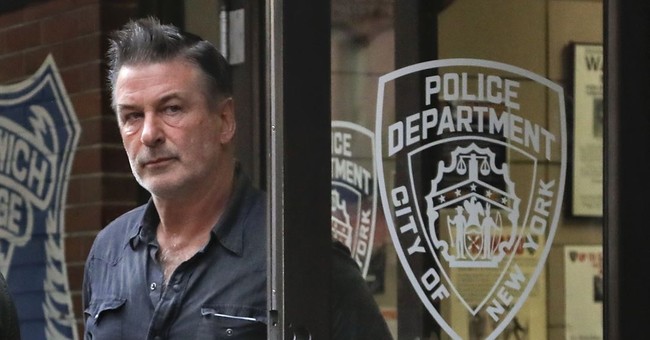 Alec Baldwin got to play his dream role last week, and unfortunately for an innocent woman, it was a method-acting version of Ted Kennedy. Now, you note that I am mocking a guy whose probable gross negligence killed a lady and maimed a man, and this raises an important question – do we really want to live in a world where our reaction to a tragedy caused by an enemy is not sorrow and compassion but mockery?

It doesn’t matter what we want. We do live in such a world, in large part due to the likes of Alec Baldwin. Besides his scuzzy abuse of the people – notably women – in his orbit, he is a particularly loathsome social media presence, and as a result, conservatives are gleefully resurrecting his old tweets about guns and his wish for them to be used on his many, many enemies in the wake of his horrible act. There are many, many such tweets. I am not a believer in karma and do not fear it, but I do try to keep a respectful distance from irony.

Note that arguments that this somehow hurts the families of the victims are weak – “My beloved relative has died – I shall seek solace on Twitter” seems far-fetched. Moreover, the families might be mortified to see people taking apart the architect of their pain? Doubtful. If anything, the practical effect of slamming Six Gun Alec is making people think, “Gosh, better not play with firearms lest people on Twitter roast me.”

But there is a legit question of how we should respond to this. There have been two different reactions among those on our general side of the fight to the reactions to Alec Baldwin’s fall from, well, not exactly grace. One is to recoil with horror at the accident and assert that this is a time when we should offer our thoughts and prayers for the victims and for Baldwin, who one would hope is devastated by what he has done. Nice people tend to have this reaction, those who want to live in a more genteel world than we do. I sympathize, in that I would like to live in such a world. I would also like a unicorn pony.

Then there was the opposite reaction, in which our folks ran up the score, skewering the gun control zealot’s failure to zealously control his gun. This is playing by the new rules of gladiatorial combat in the cultural coliseum. Those burned out on the lies and calumny we are bombarded with daily tend to go this way; they are angry, and they are more than willing to give Alec a good, hard dose of his own medicine. That’s certainly my inclination. A tweet for a tweet, so to speak.

So, I sympathize with both options, and I cannot get upset at people for choosing one over the other. If you want to go gentle, cool, and if you want to go hard, okay. After all, the rules are the rules, and there can only be one set of them. In the world I would want to live in, we would all be at Option A, whispering a silent prayer for the hurting – and I did. But this is not the world we live in, and none of us are under any moral obligation to pretend we do. This is a world where the rule is that you take an opening in the enemy’s line and you drive a couple divisions hard right through it.

Alec Baldwin is a bad person, but more than that, he is a bad person who hates us with a mortality rate thanks to his hypocrisy. And now he is vulnerable, and the rules say he is fair game – his rules. Is it significant that this amoral, leftist, Trumpophobic gun grabber has personally executed more mass shootings than any Christian conservative Trump-loving NRA member? Not in any kind of intellectual sense – it’s just a thing that happened – but it makes a helluva meme.

The argument for being nice is that 1) we should live the way we wish to live, that is, model the way we want the world regardless of how the world actually is and set the example; 2) we are better than that; and 3) Jesus tells us to. Of these, No. 3 is the most compelling – the hardest part of Christianity is loving your enemies. Perhaps you can do that even as you tweet that the fifth rule of gun safety is never give Alec Baldwin a gun. Jesus wasn’t a pinko hippie; he confronted and told hard truths. And despite the injunction to turn the other cheek, Christians are not pacifists. After all, many soldiers are Christian and they kill their enemies, so you must be able to be a Christian and point out through biting sarcasm that Alec Baldwin is awful too.

As for us modeling to the world, does that ever work? Has us not matching punch for punch with the cultural left ever made them hold up and think, “Gosh, the conservatives’ refusal to stoop to my level has made me rethink this whole pursuit of power thing – I will forgo it and return to the norms of yesteryear”? Of course not. George W. Bush famously remained above the fray and they only stopped vivisecting him when he joined them in vivisecting us.

As for us being “better than that,” I’ll take being just as bad as that and not being a cultural serf over the David French position, which is the converse.

The argument for Option B is that you can’t go back to the past paradigm where you didn’t hit ‘em when they were down without punishing them for hitting us when we were down. Pain is the teacher. Of course, this assumes a paradigm not in evidence; we were never quite that pristine. I remember that within days of the Challenger accident, cruel jokes circulated across campus. Gallows humor has always existed, and there’s no reason it shouldn’t – maybe we’d just prefer a scenario where we acknowledge it’s appalling even as we laugh in spite of ourselves.

To not engage on the terms that reality has set before you is to accept defeat. You might not like the rules, but there they are. In a society that has made the rule that you pummel your opponent when he is down, to not play by the rule is to unilaterally disarm.

Those nice folks on our side don’t see it that way – they see it as embracing decency. But lately, “decency” has translated as submission and, not being Bulwark staffers, we’re not into that scene.

The bad guys want us to be “decent” too – but not because of decency but because it makes their lives easier when we are hamstrung in response to their cultural aggression. We’re not supposed to make jokes about Alec Baldwin’s idiocy for the same reason we’re not supposed to make jokes about men pretending to be women pretending to be admirals. Humor, especially mean humor, is subversive. The leftist joke stasi wants the potential for subversion off the table.

So do as you wish about Alec Baldwin. If you want to remain in the light and offer your condolences, do so. Like I said, I’ve muttered a prayer for him and his victims because my faith tells me to do so and loving only your friends is kind of a meaningless exercise. I don’t like Alec Baldwin (though I really enjoy his acting). He’s awful. So I’m also going to talk bad about him and his hypocrisy and negligence.

Those are the rules we’re playing by today. I didn’t make the rules. I don’t like them. I’m even willing to return to the old ones, once enough pain has been inflicted to teach the necessary lesson about changing the rules. But I am not willing to play by a different set of rules that limits me at the expense of my opponents.

That’s the conundrum. I want a nice world, but I can’t get it just by being nice. So leftists, let me know when you want to change the new rules back. Until then, they are in effect.

Conservatives Must Stand Together and Fight. Join Townhall VIP. And Check Out Last Week's Stream of Kurtiousness, I'm Sick of the Lies. And my podcast, Unredacted.

Kelly Turnbull plays by his own rules. The sixth of these conservative action thrillers, The Split, shows what happens when America splits into red and blue countries. Get all six bestsellers, including People's Republic, Indian Country, Wildfire, Collapse, and Crisis!