Kurt Schlichter
|
Posted: Aug 09, 2021 12:01 AM
Share   Tweet
The opinions expressed by columnists are their own and do not necessarily represent the views of Townhall.com. 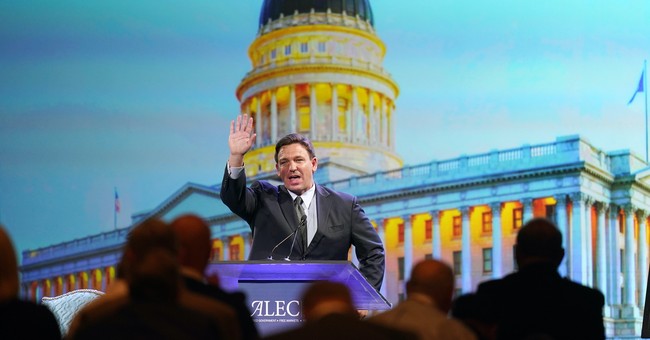 You can feel the cold terror of the Dems as Ron DoomSantis strides across the American political stage laying waste to the puny mortals nipping at his ankles, President Asterisk among them. The doddering old pervert might have thought he was cunning when asked by a reporter about the Lord Humungous of Florida by asking back “Governor Who?” Of course, the question became whether or not that mush-junkie Matlock superfan was trying to high-hat the competition or whether he really had no idea who the reporter was talking about when DeSantis riposted, “I’m not surprised that Biden doesn’t remember me . . . The question is what else has he forgotten?” Way to turn your diss gambit into a massive self-own, Crusty.

The media is pulling out all the stops to knee-cap DeSantis before he becomes unstoppable through his combination of competence and not caring. So suddenly, according to the regime-licensed media, Florida is a smoldering wasteland of hacking, dying victims of Governor Grim Reaper. Except DeSantis has been out there pushing the vaccine – for people who want it – and the whole “DeSantis is anti-vaxx” kind of contradicts the prior narrative about how DeSantis was colluding with big donors to monopolize the vaxx to line their pockets. Pro-Tip, Lil’ Goebbels Gang – you should try to at least keep your lies consistent. After all, everyone’s not as dumb as your Democratic constituents.

Why is DeSantis invulnerable to their slings and arrows? The not caring is a big part. At some level, Trump still wants to be accepted by the elite – this is why he baffles us by still giving interviews to the shabby likes of Maggie Haberman and Bob Woodward even though they treat him like a Boy Scout trying to earn a Lincoln Project merit badge.

Not DeSantis. He doesn’t care. He’s not about mean tweets. He’s about ripping out their throats by accomplishing things that make them cry.

He’s what’s coming, so brace yourself for the thinkless think pieces on how “DeSantis is Worse Than Trump!” And, improbably, they are right.

DeSantis internalized the lessons of Donald Trump. Mean tweets were great six years ago when the president came down the escalator. But, as Alinsky pointed out, anything that goes on too long becomes a drag. DeSantis understands the base wants results, promises kept, and conservative wokeness. It’s not enough to talk – we demand our pols do. Trump’s biggest success came when he was keeping promises – in fact, he kept more than anyone had any right to expect. And we need to know that our standard bearer knows what time it is – that means he gets, instinctively, that this is a freedom vs. serfdom scenario in which our enemies want us disenfranchised, disarmed, and sometimes dead.

DeSantis, with his honey badger DNA, is a relentless killdozer of conservative activism. And all the liberal tears just bead up and run off him.

He’s not the only Conservaterminator. Some get it instinctively – Ric Grenell comes to mind. So does former National Security Advisor Robert O’Brien. For others, DeSantis’s America First gravity is pulling them along. The Greg Abbots of the world might not be so aggressive but for the Florida example, yet they understand that there are only two kinds of Republicans now – our kind, and the kind who are doomed to the cruise ship circuit. Pick a side, us or Ahoy.

Those are the losers, the ones who have fallen out in the great road march to victory. Asterisk *dministration-approved sellout Asa! Hutchinson has fully committed to earning, through slobbering obedience, a seat on the Walmart board. When he’s not following the Official Narrative that boys pretending to be girls are girls, he’s decrying how his legislature won’t let him please his masters by decreeing that all of Arkansas participate in the pandemic performance art of mandatory masking. Asa! will certainly earn his biscuit and cash-in. Look for him on MSNBCNN explaining how True Conservatives™ are utterly scandalized by those uncouth barbarians like DeSantis with their masculinity and refusal to conform. “That’s not who we are!” they sob.

Then there’s Kristi! Noem, who hilariously thinks she’s still a player after her own transexual fiasco in which whatever morons are advising her decided the best way to address the issue was to tell the people protesting her total backtracking on her promise to protect girl’s sports that they were just too stupid to understand how her betrayal was actually total support, somehow. She’s more tone-deaf than the guys from Nickelback – she supposedly just attended a fundraiser with John Boehner, if you can believe it. What, was Paul Ryan busy? And she is taking down other clueless Republicans – Jane Timken just detonated her Ohio Senate campaign by accepting South Dakota Jeb!’s endorsement.

Please clap as Kristi! continues to mosey on, thinking that she’s got a shot, and taking shots at DeSantis for disobeying the Chamber of Commerce. It won’t help. She’s done. When it got tough, she folded to the establishment. She’s disqualified. No appeals. No second chances. If Kristi! wishes to serve the conservative movement instead of her own ambition, she can still do it – as a cautionary example of what happens when you sell us out to your corporate donors.

And the less said about Nikki! Haley the better. She’s just a few lost primaries and a spoonful of resentment at us wokecons from becoming the Mitt Romney of Liz Cheneys.

In 2024, it’ll be Trump again, or DeSantis, or perhaps someone else who is hard. But it won’t be a squish. This is the time of the winnowing, folks. Chaff, away with you – we want the wheat. If you aren’t all in for us, through thick and thin, despite media whining and the pearl-clutching of the softcons, you’re done. Over. End of story.

The sixth and shootiest Kelly Turnbull action thriller, The Split, is here and the five-star reviews say it all. Check it out and check out Crisis, as well as my other four novels about what happens when America splits into red and blue countries, People's Republic, Indian Country, Wildfire, and Collapse!