Fire the Admirals to Encourage the Others

Kurt Schlichter
|
Posted: Nov 25, 2019 12:01 AM
Share   Tweet
The opinions expressed by columnists are their own and do not necessarily represent the views of Townhall.com. 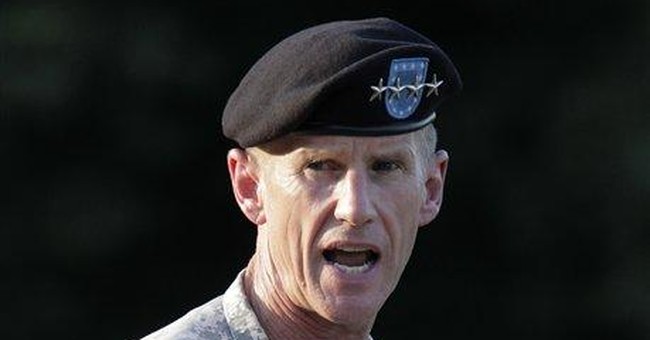 Mark this day on your calendar because here is the moment that I admit that Barack Obama did something right. He fired Army General Stanley McChrystal.

Now, I would have fired him well before for failing to win the Afghanistan War. In World War II, which America incidentally won, we fired lots of generals and admirals for failing to win. It was nothing personal. You aren’t winning, so “Next!” Obama did (gently) fire McChrystal’s predecessor for failing to win; he was a good officer who, by coincidence, was literally onstage talking to my Army War College class the moment Obama’s firing of McChrystal was announced. But that’s about the only big-name general fired for not winning since the not-coincidentally Endless War on Terror™ began.

Anyway, Obama fired McChrystal because McChrystal surrounded himself with a staff that included petulant and childish folks who decided it was a smart idea to run down the commander-in-chief and Veep Joe Biden to a Rolling Stone reporter, who published it.

Look, I am second to none in my love of mocking the proud papa of unproud papa Hoover Biden, noted dope-huffing loser and Ukrainian gas industry expert, but when you are a general, you can’t disrespect the CinC or CinC, Jr. That doesn’t work. Similarly, President Donald Trump needs to relieve the commander of the Naval Special Forces Command. And then he needs to relieve that guy’s boss for failing to relieve his subordinate. Oh, and he also needs to relieve the chief of information, or whatever they call the head public affairs guy for the Navy, for allowing his command to issue passive aggressive statements disrespectful of the President.

And the garbage Secretary of the Navy, who allegedly told “the White House that a tweet is not an official order and if the president is ordering the Navy to end the Trident Review Board of Gallagher, he needs to do so in writing.” Can him.

The Brits know – well, knew – a bit about how to have a winning Navy and about properly orienting their admirals toward victory. After all, the purpose of a Navy is victory; the rum, sodomy and the lash parts are just fringe benefits.

In 1757, some effete British admiral named John Byng was ordered to hold Minorca and he didn’t. He "failed to do his utmost," so the Admiralty hauled him out onto the deck of a warship and shot him. Voltaire wrote about this uncompromising leadership technique in Candide and commented, “Dans ce pays-ci, il est bon de tuer de temps en temps un amiral pour encourager les autres,” which essentially translates as “shoot an admiral every once in a while to encourage the others.”

Time to figuratively shoot some admirals.

Here’s what happened. The president used his constitutional prerogative to pardon or otherwise restore the rank of three accused military personnel, which some of us in the military community had mixed feelings about but which some flag officers vehemently opposed. The most clearly correct action was the restoration of the rank of SEAL Eddie Gallagher. His shameful prosecution had been replete with JAG misconduct, including the mind boggling decision of the prosecutors to electronically spy on defense attorneys. Beyond this outrage – and I note, incredulously, that apparently no one was prosecuted for doing it – these hacks put up on the stand an immunized witness who testified that he killed the alleged ISIS victim. Gallagher was acquitted of everything except some piddling charge of taking a selfie with a terrorist stiff and still had the book thrown at him.

Well, after the acquittal, the JAGs decided to award each other medals. Medals. Not indictments for their eavesdropping antics. Not letters of reprimand for their staggering incompetence. Medals. President Trump got wind of this and had to personally direct that these defective decorations be withdrawn. Fast forward to the restoration of Gallagher’s rank and what happens next? The Naval Special Forces commander, apparently the next day, initiated a proceeding to take Gallagher’s SEAL trident, his status as a special warfare operator.

Let me explain how command works for those who aren’t military. Command is not about “orders.” It is almost entirely about the commander’s intent. You can give a formal order – “Let’s do weekly training at the rifle range.” But you can also express a wish – “It would be nice to have a silver bullet of coffee in here for the overnight shift in the main command post,” and that is also, and equally, an order. But even vaguer expressions of intent are orders – if the commander says, “Our guys are not passing the physical fitness test at a high enough rate and we need to do something about it,” then you would be going against his intent if you decided to cancel your subordinate unit’s physical training to use that time complete gender identities briefings.

Of course, that’s a bad example because in today’s military, briefings on the need to pretend to care about weird people’s bizarre gender delusions are much more important than physical fitness and no CO would get fired because his troops look like a bunch of thick Vindmans while a complaint from an aggrieved transvestite might cost you your career.

In any case, the president was unequivocal about what he wanted, and this pipsqueak admiral publicly defied and disrespected him. Then Trump tweeted that it was not going to happen. What should have happened is the Chief of Naval Operations should have picked up the phone breathing fire, but he didn’t, and it got worse. Rear Admiral Charlie Brown, Chief of Information, issued a statement reading:

"The Navy follows the lawful orders of the President. We will do so in case of an order to stop the administrative review of SOC Gallagher's professional qualification. We are aware of the President's tweet and we are awaiting further guidance."

At the same time, according to NPR, the Navy pressed on with its administrative review of Gallagher’s status.

The commander-in-chief made clear his intent. Then, when he found out the Navy was defying him, he expressed his intent again, and they still drove on with their defiance. And then the press flacks for the Navy issued their passive aggressive statement and pretended that his expression of intent did not constitute a clear and unequivocal order.

Then fire their bosses for not having fired them already by the time the president got around to it. And fire their bosses. Fire the whole chain of command and order them all to retire. And thesSecretary too. They can all go on CNN and embarrass themselves babbling about “fully semiautomatic weapons” or whatever other nonsense its audience of 12 likes to hear.

As much as the admirals – who really ought to have a bit more humility in light of the Navy’s recent demonstrated inability to perform its basic task of sailing ships without crashing them into other ships – might not approve of Trump, approving of him is not their job. While in the civilian government worker force there appears to be a Trump Exception™ to the powers of the presidency, there cannot be one within the military. This is an unprecedented breach of military discipline that must be swiftly, mercilessly and publicly crushed, here and now.

If you think some uppity lieutenant would have openly defied me when I was in command and not found his sorry rear out heading up rock repainting operations at the far reaches of the base, you are higher than former sailor Hunter Biden in a rental car.

Every commander knows you need to establish discipline. And one way to do it is to plant pikes with the heads of a dozen insubordinate admirals on the steps leading up to the Pentagon. Mr. President, you are the Commander-in-Chief and they disrespected you and your constitutional authority. Time to encourage the others to stop playing politics and start doing their damn jobs. Start encouraging, Mr. President.

Pre-order right this moment and get my latest thriller first thing on Thanksgiving Day. Collapse is my hard-hitting yet occasionally hilarious sequel to People's Republic, Indian Country and/or Wildfire, and was already an Amazon top seller, so see why. The Kelly Turnbull novels have been hailed by Bill Kristol as “Appalling,” so you know that’s good (Does Vichy Bill make an appearance in the book…? No spoilers…)

UPDATE: After this column was written, the Los Angeles Times reported: “U.S. Navy Secretary Richard V. Spencer denied a New York Times report Saturday that he had threatened to resign or be fired if President Trump intervenes to stop an administrative review of a SEAL at the center of a botched war crimes court-martial.” But if he doesn’t put an end to this mini-mutiny pronto, the president should still Schiffcan him.

FURTHER UPDATE: And Trump fired the bum (through the Defense Secretary). Good riddance.