Be A Rooftop Korean

Kurt Schlichter
|
Posted: May 02, 2019 12:01 AM
Share   Tweet
The opinions expressed by columnists are their own and do not necessarily represent the views of Townhall.com. 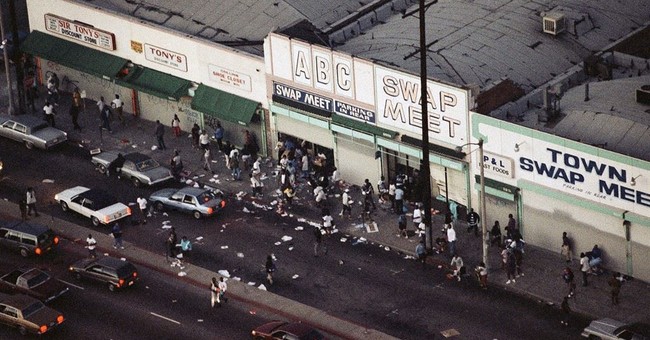 We should all be ready to do our duty as American citizens and, when duty calls, each of us should embrace our inner Rooftop Korean.

The year was 1992, 27 years ago right about now, and the city was Los Angeles. Several police officers who got into a videotaped brawl with a petty criminal named Rodney King were acquitted of beating him up. The city exploded. It was chaos.

I was a first-year law student, back a year from the Gulf War, and I had just joined the California Army National Guard. My unit was the 3rd Battalion, 160th Infantry, and we got called up early the first night and were on the streets for three long weeks. Making it even more delightful was the fact that the unit was in Inglewood, which was pretty much on fire. They burned most everything around, except our armory – that would have gone badly for them – and the Astro Burger.

My battalion commander grabbed then-First Lieutenant Schlichter, and we went all over the city in his humvee as he led his deployed and dispersed troops. Our soldiers came, in large part, from the areas most effected by the riots, and they were notably unpleasant to the thugs and criminals who quickly discovered our guys had no patience for nonsense. One dummy discovered that the hard way when he tried to run over some Guard soldiers from another battalion; he had a closed casket funeral.

The city went insane. Order simply ceased to exist. It was Lord of the Flies. I remember a cop totally breaking down because everything was completely out of control.

But I had a M16A1 – a real assault rifle – and I had a bunch of buddies with M16A1s. The regular folks … not so much. The decent people of LA were terrified, and with good reason. See, the dirty little secret of civilization is that it’s designed to maintain order when 99.9% of folks are orderly. But, say, if just 2% of folks stop playing by the rules…uh oh. Say LA’s population was 15 million in 1992…that’s 300,000 bad guys. There were maybe 20,000 cops in all the area agencies then, plus 20,000 National Guard soldiers and airman, plus another 10,000 active soldiers and Marines the feds brought in. Law enforcement is based on the concept that most people will behave and that the crooks will be overwhelmed by sheer numbers of officers. But in the LA riots, law enforcement was massively outnumbered. Imposing order took time.

And until then, our citizens were on their own, at the mercy of the mob. Betting that the cavalry was going to come save you was a losing bet.

LA’s Korean shopkeepers knew that. They operated many small businesses in some of the least fashionable areas of Los Angeles, and they were already widely hated by activists, being scapegoated for problems and pathologies that long pre-dated their immigration to Southern California. So, they became targets for the mobs.

Bad decision by the mobs.

See, most of these Koreans had done their mandatory service in the Republic of Korea’s Army. Those ROK soldiers are the real deal – the Norks are not a theoretical threat and the South Korean army does not spend a lot of time talking about feelings. They were some solid dudes. So, when the local dirtbags showed up for some casual looting, they noticed the rooftops were lined with hardcore guys packing some serious heat, including the kind of scary rifles that the Democrats want to ban.

It did not take long for the bad guys to realize that the Rooftop Koreans were not playing games – they were playing for keeps. The mob went away in search of softer targets.

There’s a lesson there.

Our first responders are awesome, but it takes nothing away from their heroism to point out that the title “first responder” is a misnomer. The citizens on site are the first responders. And they should be ready to respond. We all should. Personally.

Some duties of citizen should never be outsourced. If you are an able-bodied adult, it’s your duty to know how to stop the bleeding and give CPR until the pros who do it for a living arrive. And it’s your duty (and right) to defend yourself, your family, your community and your Constitution. With guns – effective guns, which sometimes means your concealed pistol and sometimes means the guns that those who want you defenseless call “assault weapons.”

Ban them? We should insist non-felon adult, able-bodied citizens own them and become proficient with them because all that law and order you see around you can disappear in a heartbeat. I watched it happen up close and personal, in one of America’s biggest cities. And as the Rooftop Koreans recognized, groups of citizens with (preferably) semi-auto rifles with 30-rounds mag is the only thing that is going to keep a mob in check.

It’s your duty to be prepared to defend our community. Your duty. Yes, being a citizen of a free country is sometimes hard. Too bad. Tighten up and be ready and able to pick up a weapon. Whether it’s a riots and disaster, or whether it’s some scumbag who decides to shoot up your house of worship or a shopping mall, it’s on you.

You have a job to do when chaos comes – no shirking your responsibility and outsourcing it to the local police or the Army. Being a citizen is not a spectator sport.

Now, the left does not see things that way. The mere idea of a good guy with a gun makes them wet themselves. The left hates the notion that we citizens might take personal ownership of, and responsibility for, the security of our own country – that we might act like citizens. See, citizens are unruly. Stubborn. Uppity. We’re hard to control at the best of times. Armed, 300 million of us are impossible to control, unless we consent to it.

Now, the Founders, who enshrined the natural right of free men to keep and bear arms in our Bill of Rights preceded only by the rights of free speech and freedom of religion, knew this. To them, an armed citizenry that is prepared, mentally and logistically, to respond to threats to the people is a feature.

To the liberal elite, it is a bug.

The elite wants serfs, not citizens. It recognizes the threat in our possession of modern weaponry. But it’s not a threat of us causing evil but of us quelling it. An armed people is a free people, and a free people demands its rights and its say in its own governance. Liberals talk about “gun control,” but what the really want is total control.

There are two models to which Americans can aspire. One is to be citizens, armed and sovereign. The other is to be serfs, disarmed and obedient to their liberal elite overlords. Choose wisely.

Choose to be a Rooftop Korean.

These two models collide in my action-packed (and occasionally hilarious) novels about the United States split into red and blue, People's Republic, Indian Country and Wildfire. The pack of losers at that sad website that replaced what used to be the failed Weekly Standard hailed these books as “appalling,” so you’ll love them!